You Need a Canoe to Reach This Lunch in Panama

Just north of Panama City, the pre-Hispanic Emberá tribe is still building life on the river 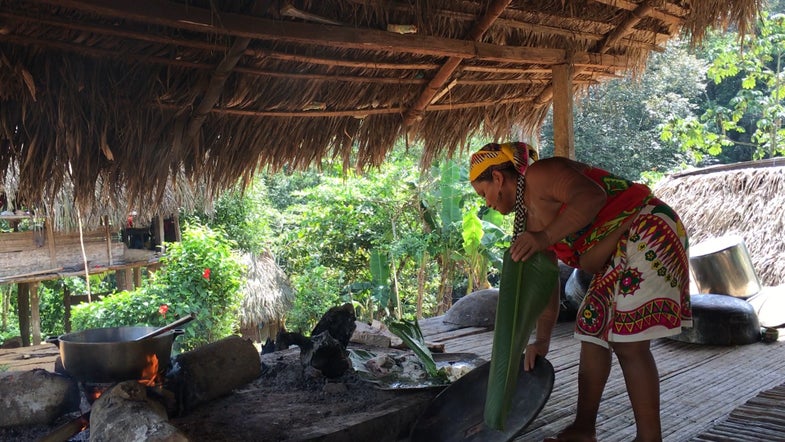 The Pan-American Highway is less a road than a 30,000-mile-long spiderweb. Its threads run through 14 countries, from the United States to Argentina. But there’s a 100-mile chunk missing through the border of Panama and Colombia; here, the mountainous jungle terrain is too rugged to be paved.

There is ongoing consideration to build one—connecting Yaviza, Panama to Turbo, Colombia—but it faces steadfast concern that a break in the rainforest would affect Panama’s annual rainfall, putting the Panama Canal (and the country’s economy) at risk. Plus, the jungle is a barrier against drug trafficking and from certain illness reaching North America. The region, known as the Darién Gap, is where the Emberá tribe lives.

The Emberá are an indigenous group native to the Darién Gap, which is comprised of the Choco department in Colombia and the Darién Province in Panama. After the Spanish invasion, they spread west to the jungles near what would eventually become Panama City.

It was here, on the bank of Lake Alajuela in Salamanca, that a dugout canoe picked me up for lunch.

We faced headwinds as we left the shore. The lake’s warm water seeped through tiny cracks in the canoe; one man steered a small outboard motor while another scooped water back into the lake. The boat pointed northwest toward Boqueron, where the Pequeni River narrows and channels into the San Miguel River, the banks of which form the Emberá Purú village of 128 people living among 31 houses.

The outboard motor, along with other more modern commodities like dyed fabric clothing and steel pots for cooking, became realities after the Emberá Purú moved to their current location in 1963. That decade saw Omar Torrijos, Panama’s de facto dictator, push indigenous peoples to settle in communities (opposed to smaller extended family units) in order to gain access to government-sponsored benefits like school and health care. The re-grouped Emberá’s proximity to Panama City provided an outlet to trade their goods—and the opportunity to bring in visitors.

So there I was, on an elevated floor raised two stories above the ground as oil simmered in a caldron. I rinsed my hands in a bowl of water full of vibrant leaves and herbs pulled from nearby plants. As they dried I caught whiffs of orange and lilac and cinnamon. Lunch would be twice-fried plantains and fish, also fried, that we picked up on the way in.

Somewhere along the Pequeni River, in a shallow part near a garden of water lilies, our boat pulled up to another just like it. Only this one was occupied by a lone man throwing a short fishing line from his bare hands, over and over. His boat also leaked, but he left the water in place to hold the impressive collection of small fish he had caught since morning.

The plantains, cut into thick chunks, hit the oil first. A gentle stir ensured none stuck to the bottom and burned. As they frizzled, others bowls were from banana leaves torn in half lengthwise, folded, and held together by the stem (previously removed and shaved into a long needle). Smashed plantains and crispy fish came together in the bowls, collected on the wooden tray. We ate in silence save for the still-crackling fire and crunch of plantains.