Lemon-infused with a bit of spice, this essential dish draws parallels across cultures while remaining distinctly Guamanian. 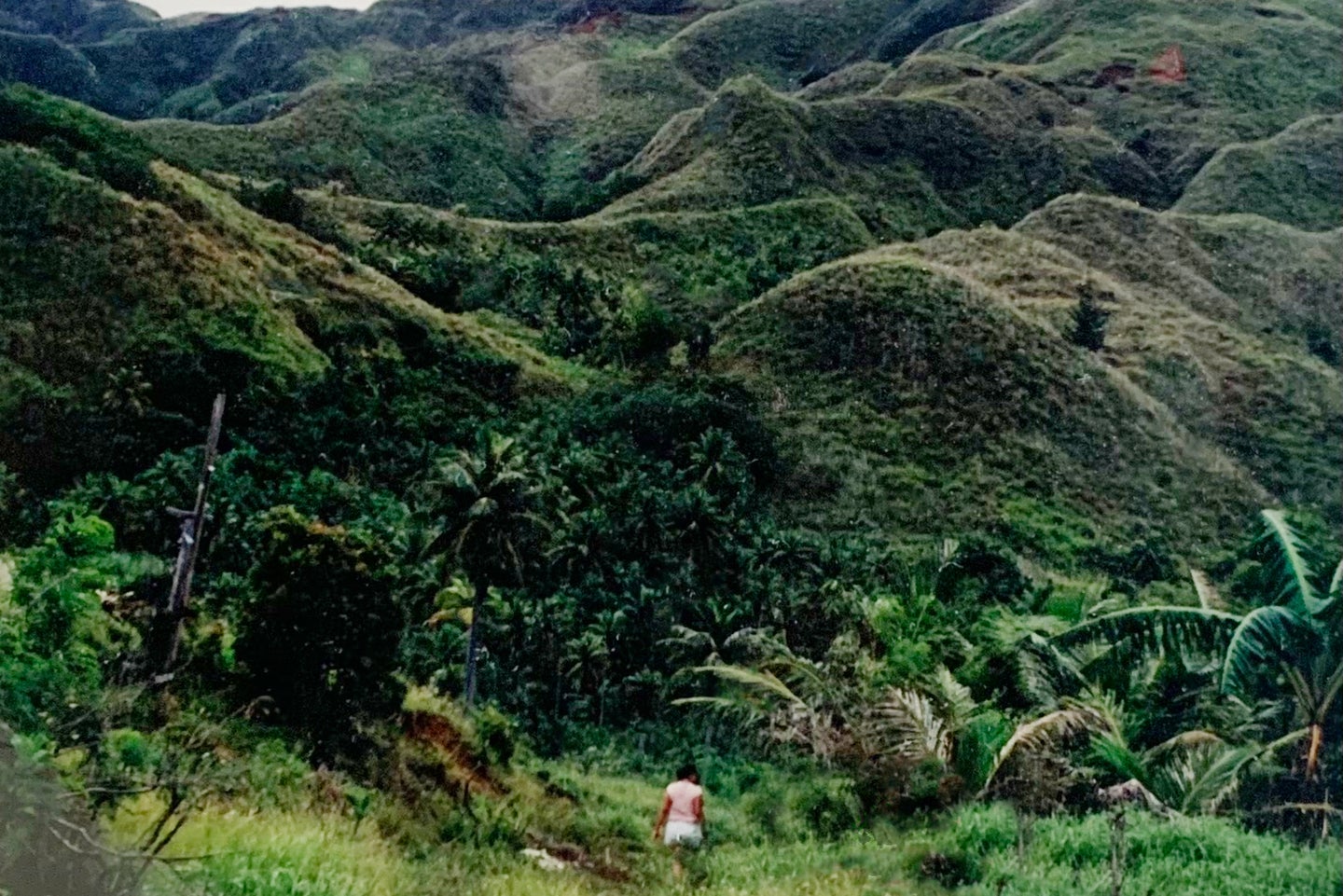 As a white-passing woman with green eyes, I don’t carry my CHamoru heritage from Guam in a way most people immediately see. When I was growing up in California, learning about my culture through my mother and her family was one way I could connect more deeply to that part of my genealogy. A key—and very tasty—part of that education was making and eating CHamoru food.

Like most CHamorus (also stylized Chamorros), my maternal grandparents enjoyed connecting with family and friends over food, even after they moved to the mainland U.S. As a child, some of my favorite dishes were inspired by other cultures that occupied or immigrated to Guam over the course of history, such as chicken adobo, pancit, and lumpia. But others are uniquely CHamoru: rice drenched with fina’denne’ (a soy sauce-based chile sauce), and chicken kelaguen, also known as kelaguen månnok, a recipe my grandmother learned from her own grandmother and passed down to my mother and me.

On a recent visit home, my mother made a surprise batch of this special dish to celebrate my husband’s birthday. My mouth started watering as soon as I saw the mound of shredded chicken. Taking my first bite, I lingered a moment to let the cascade of flavors register: a swell of tart citrus quickly tempered by milky coconut, punctuated with zings of spicy red chile and green onion. The cool white meat was refreshing and aromatic, waking up my palate with a jolt—then joyfully confounding it so that I wanted to go in for another bite, and another.

A Beloved Dish with Mixed Origins

Guam has a rich Indigenous culture that continues to thrive, despite centuries of foreign occupation—first by Spain, which used Guam as a key stopover on its Mexico-to-Manila trade route, then the United States and, briefly, Japan. After World War II, Guam became a U.S. territory, and since then, the island has welcomed diverse immigrant communities, including Asians (from the Philippines, Korea, China, and Japan), Micronesians, and white Americans from the mainland. Each of these cultures has introduced its own customs to the island; over time, CHamorus have incorporated many of those influences into Guamanian cuisine. The resulting culinary landscape is both hyperlocal and reflective of the world at large.

Kelaguen is considered a uniquely CHamoru dish, but it is thought to have originated in the Philippines, where vinegar or acidic fruit juices are used to “cook” both raw and cooked meats, seafood, and vegetables. In Paleric, a chronicle of Guam’s history, Pale Eric Forbes speculates that Latin American settlers may have had a hand in developing the dish, but the historian acknowledges that “since lemons and limes did not grow in our islands before the Spaniards came, it’s more than likely that the basic recipe for kelaguen came from Filipino settlers in the Marianas.”
Judith Selk Flores, PhD suggests that the earliest versions of the dish were likely made with fish and banana flower (fafalu), but that the application of this method to beef, venison, and chicken coincided with the arrival of the Spanish, who introduced new animals to the island in the 17th century. Forbes notes that the striking similarity between the CHamoru word kelaguen and the Filipino kilawin may be an indicator that CHamorus borrowed the term to describe their own unique take on the dish. (The letters G and U combine to make the W sound in CHamoru, as in guiya, guennao, pugua’.) However, there are few written records of the dish before the 1950s, so it’s difficult to know for sure.

At Prubechu in San Francisco, chicken kelaguen is served atop CHamoru titiyas with a squeeze of aioli, a non-traditional addition that complements the flavor profile. Manny Crisostomo

Kelaguen is a local specialty on Guam that is served year-round, in part because it is so versatile in its preparation. “No other dish represents CHamoru culinary fare like kelaguen månnok,” write Gerard and Mary Aflague in their book, CHamoru Cuisine: A Mariånas Cultural Legacy.  While subtle variations to the traditional recipe abound, most start with four key ingredients: finely shredded or chopped protein (in this case, chicken), citrus juice or powder, onions, and fresh hot red chiles. Grated unsweetened coconut is almost always added to chicken- and fish-based kelaguen, while red onions may be used in red-meat versions.

Some people—including my mother—like the convenience and flavor of a store-bought rotisserie chicken, or prefer to use only dark or light meat. For others, the flavor of fire is key: “A barbecue grill is pretty crucial for chicken kelaguen,” explains Shawn Camacho, general manager and co-owner of Prubechu, a CHamoru restaurant in San Francisco. “The smoke and char are such an important part of that dish’s flavor profile.” As for the other ingredients, Camacho says that “the magic is in the ratios.” Whichever route you choose, finely shredding the chicken by hand or chopping it into very small pieces is essential, as doing so allows the flavorful marinade to fully infuse the meat.

Fresh lemon or calamansi juice often creates the dish’s acidic profile, though on Guam, Yours brand lemon powder is a popular substitute. Both my mother and Camacho’s business partner, chef Shawn Naputi, only use scallions in their kelaguen, but some cooks like to add white or yellow onions too. Others like to swap out the fresh chiles for donne’ dinanche (CHamoru red chile paste), or add diced bell peppers for extra color and crunch. Achieving the right level of spice is important; on the island, finely chopped donne’ sali and donne’ ti’au  peppers—small red varieties that are “extra hot” and “regular hot,” respectively—pack the right punch. Stateside, red bird’s eye chiles are a more widely available option. The coconut is traditionally grated fresh, though frozen pulp is a reliable substitute. Even dried, unsweetened coconut works well, so long as you lend additional moisture to the dish with some extra marinade.

The character of kelaguen changes over time, settling into itself after a day; patience will reveal a nuanced flavor profile. From my own experience, I recommend first-timers prepare the dish according to a traditional recipe, then subtly adjust the ratios to meet personal preferences.

Naputi and Camacho can’t talk about kelaguen without sharing their own childhood memories of the dish “My grandpa and the men would grill the chicken, then they’d bring it in and all my aunties would sit together and gossip while cutting the chicken together,” Camacho says of the communal experience. “My grandma was the one to take all the ingredients, mix them, and add seasoning.”

Like most things on Guam, making kelaguen is still so often a family affair.

Get the recipe > Larkin Fegurgur Clark