Is Fungus-Based Foie Gras the Next Meatless Sensation?

Charcuterie just went pro-plant—and we have the tasting notes. 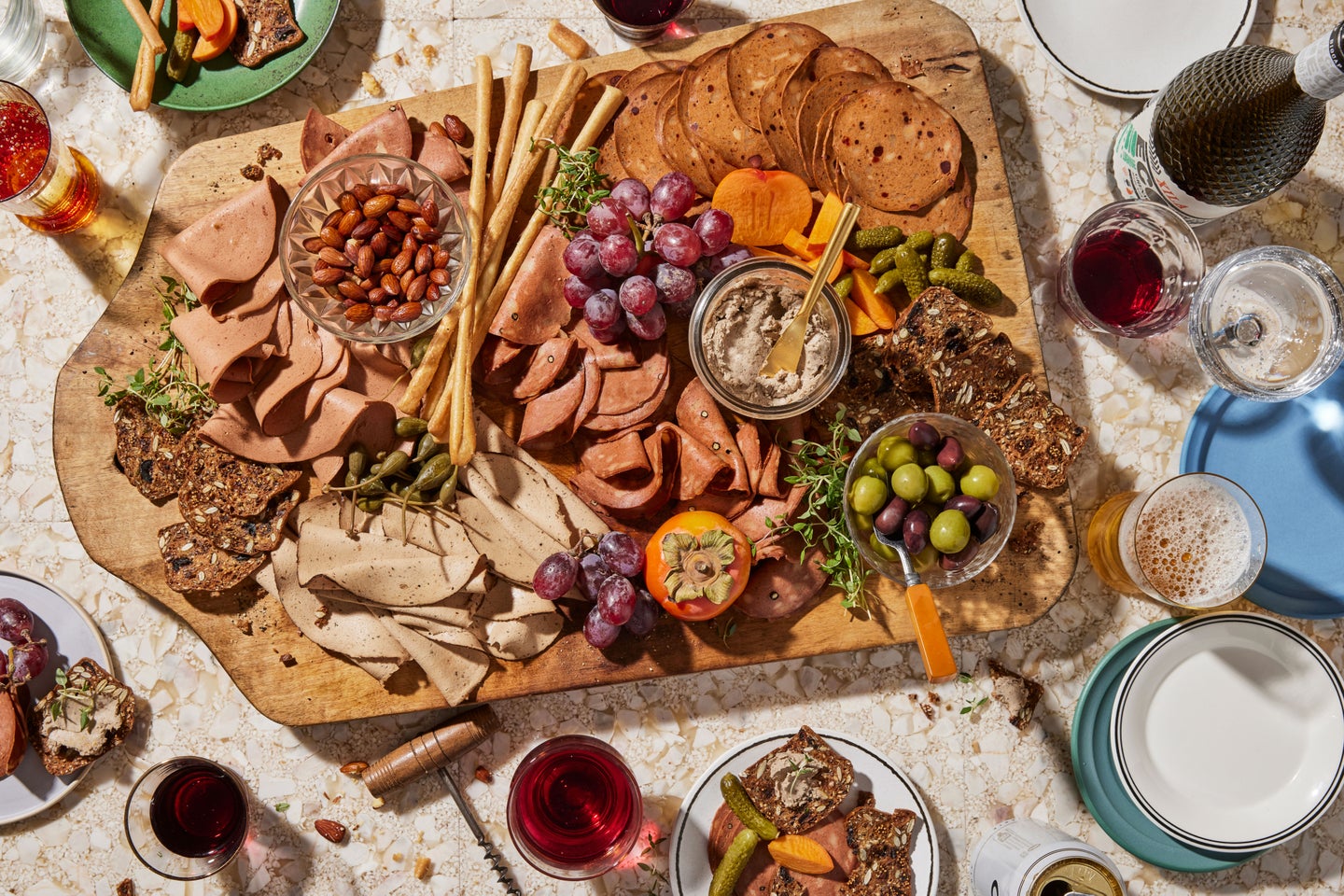 Kimberlie Le had already completed the credits for three majors during her undergraduate studies at UC Berkeley when she decided to switch her focus to producing alternative meats.

While conducting microbiology research to find solutions for improving food systems, she had become increasingly aware of the environmental impact of animal agriculture. And so, Le abandoned her degree to join the UC Berkeley Sutardja Center for Entrepreneurship and Technology’s then-new Alternative Meats Lab . There, she and classmate Joshua Nixon began to build what would eventually become the meat-alternative brand Prime Roots—which will launch a new line of animal-less meats in grocery stores and restaurants later this year.

So far, much of the meat-free industry has centered around pea- and soy-based options, which are often in ground-up or breaded forms (think nuggets, meatballs, and burger patties). Prime Roots, on the other hand, is focused on charcuterie. And instead of using plants, the company’s proprietary technology involves growing the fibers of koji—a fungus commonly used in East Asia to produce fermented foods like miso and soy sauce—to replicate the stringy, striated texture of meat. Next, fats and seasonings are added, before the mixture is shaped and cooked to produce koji-based imitations of foie gras, pâté, and salami, as well as deli-style ham and turkey.

Familiarity with koji came to Le early on in life. “I’ve been growing [it] since I was four,” she says. Her mother is chef Chi Le, a runner-up of MasterChef Vietnam and owner of the plant-based Vancouver eatery Chi, who taught Le how to use the fermentation agent to make everything from cookies to rice wine. Because the ancient and widely used fungus is already part of many chefs’ culinary toolboxes, Le believed it would be seen as approachable and credible.

When I met Le at the Prime Roots headquarters in Berkeley, California, we headed to a showroom set up like a deli of the future. Inside, hunks of meatless meat labeled “cracked pepper koji turkey” and “harvest koji pâté” sat behind glass cases. A team member brought us a board arranged with the company’s koji charcuterie offerings, as well as two sandwiches featuring the koji deli meats. The pâté, which was rich and spreadable, tasted remarkably like the animal-based original, though with a slight coconut aftertaste (coconut oil provides fat in Prime Roots’ recipe). And while the koji ham and turkey didn’t have quite the same brine or sinewy texture as deli meats I’m accustomed to, they were close enough substitutes to make for substantial—and, so to speak, meaty—sandwiches. Though the macronutrient profiles of Prime Roots’ koji charcuterie differ slightly from those of their animal-based counterparts (the fermentation agent naturally has dietary fiber, for example, while meat doesn’t), Le says the caloric density is identical.

But creating stand-ins that are indistinguishable from their traditional versions isn’t necessarily Le’s goal. She doesn’t have aspirations to adopt a fully vegan lifestyle; rather, she wants to provide omnivores and flexitarians with non-meat options that have a meat-like taste, mouthfeel, and nutritional profile—with less impact on the planet. (According to a Nature Food study published in 2021, animal-based food production results in twice the carbon emissions as plant-based.) The koji-based products also lack the curing agents, hormones, and antibiotics often found in processed meats.

Le likens her hopes for koji charcuterie to what dairy-free milk brands have done for cow’s milk: “Oatly, for example, doesn’t taste like dairy milk, but it has the same functionality. It foams. It has the creaminess. It tastes good.” Rather than expecting koji to replicate meat exactly, Le wants to produce a new category of protein that meat eaters can swap in—say, when they are arranging an elegant charcuterie board, or preparing their children’s lunchboxes—and still feel satisfied. (Of the 30-odd employees at Prime Roots, 29 consume animal meat.) And in comparison to many other eco-conscious habits people are encouraged to adopt, Le adds, “meat makes more of an impact—which is a choice we make three times a day.”

Since its founding, Prime Roots has experimented with koji-based salmon, lobster, and whole-muscle chicken and steak. “Center-of-the-plate proteins are very tough for meat alternatives,” Le admits. In the world of steak, for example, quality can vary widely, and eaters expect a certain experience when paying for the decadence of an expensive, deluxe cut of meat. On the other hand, something like charcuterie—which can still be refined, but is more often enjoyed as an appetizer or snack, and conveniently comes ready to eat—is “much less emotional,” notes Le. The company plans to begin distribution to grocery stores later this year, and Le says chefs at fine-dining establishments have already expressed interest in serving it at their restaurants—not as “vegan charcuterie,” but simply charcuterie.

Prime Roots is far from the only Silicon Valley startup using something other than plants to produce premium meatless meats that don’t require sandwich buns—or even cooking. Wildtype, a start-up founded by Aryé Elfenbein and Justin Kolbeck, has developed sushi-grade cuts of salmon by cultivating cells, another technology driving experimentation in the world of futuristic protein. The process involves taking cells from living salmon and growing them in a controlled environment to produce whole cuts of fish.

Because cells are highly sensitive to their surroundings, fish of the same species can taste vastly different depending on their environment. (The wide variation, Kolbeck and Elfenbein note, is clear in the discrepancy between wild-caught and farmed salmon, for instance.) Manipulating variables to figure out the optimal nutrient composition and growing conditions for the salmon cells has involved a lot of trial and error, largely because relatively little is known about the developmental biology of fish, especially when compared to that of mammalian species. Plant-based “scaffolding” then encourages the cells to structure themselves into “the same cuts of seafood that are familiar to us—at the sushi counter, for example,” explains Elfenbein, a cardiologist who has a background in molecular biology. Though the goal is to create the flavor, texture, and mouthfeel of salmon, don’t expect to see any fins and gills—the company plans to only produce the cuts of fish customers are more likely to eat.

According to Elfenbein, the world’s demand for seafood is putting added pressure on an already increasingly contaminated seafood supply. “There are many elements of our seafood today that shouldn’t be there, everything from heavy metals to antibiotics to more parasites than we’ve seen in the past,” he explains. Kolbeck also points out a 2021 study which revealed that bottom trawling, a fishing method that involves dragging giant nets along the sea floor, releases as much carbon emissions as the worldwide aviation industry—which is destructive to marine biodiversity and threatens the ocean’s ability to function as a carbon sink. “Our ocean’s ability to keep our planet relatively cool will not work as well if all we have in the ocean is jellyfish, which is the trajectory that we’re on right now,” says Kolbeck.

But seafood does offer an abundance of nutritional value, from protein to essential fatty acids, so by giving consumers an option with a smaller environmental footprint, Kolbeck and Elfenbein hope seafood enthusiasts will make the climate-conscious choice that still provides the same omega-3 fats as naturally-grown salmon.

According to the co-founders, the protein content of Wildtype’s fish is still lower than that of traditional salmon, and one of the company’s priorities is bringing that number up. The company is also in the midst of a pre-market consultation process with the Food & Drug Administration (FDA). While they recognize that consumer acceptance of cell-based seafood will take time, Kolbeck and Elfenbein have high hopes that FDA approval will make a big impact—and allow them to increase production capacity and bring production costs down.

Wildtype isn’t alone in the race to produce whole cuts of seafood without harming any fish in the process. Impact Food, another Alternative Meats Lab alum, has produced whole cuts of tuna—similar to raw bluefin you might find in sushi—but rather than experimenting with cells, the company has turned to plants. Founders Kelly Pan, Stephanie Claudino Daffara, and Adrian Miranda combined various kinds of plant-based protein isolate to create a product that imitates the texture and nutritional profile of tuna. Like Wildtype, Impact Food is still constantly working to fine-tune the taste.

“There’s such a fine balance to making an alternative product that has the right texture, whether it be juiciness, fibrousness, firmness, fattiness,” says Celia Homyak, co-director of the Alternative Meats Lab. On top of this already tall order, she notes, fish pose unique challenges because ”a lot of seafood is very light in color and slightly transparent.”

Still, with more and more animal-free proteins hitting the market, Homyak hypothesizes that plant-based meat in general is well on its way to replacing animal meat in a significant portion of Americans’ diets, while cell-based meat is likely further down the road, largely because the research is in earlier stages. But she doesn’t know if alternative meats will ever fully replace animal meats—or even if they should. “Meat serves a purpose in people’s everyday culture and lives,” says Homyak. Rather, she believes the goal should be to “decrease that environmental impact that animals have,” while “increasing our vegetable intake, which is just better for everyone’s health.”

Whether based in plants, fungi, or animal cells, foods like Wildtype’s salmon and Prime Roots’ charcuterie are often referred to as “alternative meats.” But the entrepreneurs behind the products envision a future in which real, traditional meat is no longer the default choice. “I think there’s a world where we can flip those connotations,” says Le.