On the west coast of Greenland, Michelin-starred KOKS highlights all that the rugged landscape has to offer—from bowhead whale to beetroot. 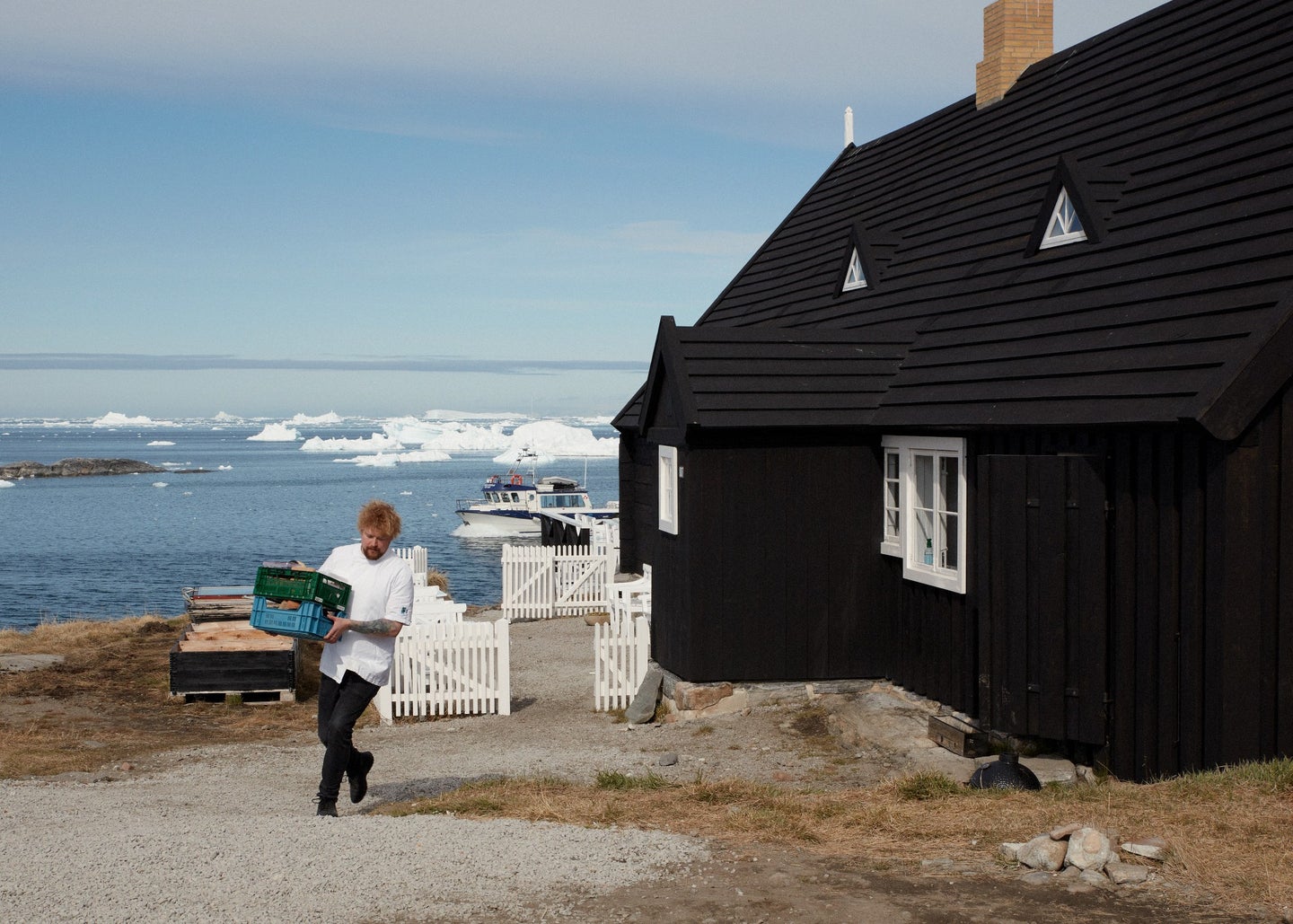 Nino Fjordside Andersen, one of the sous chefs at KOKS, carrying ingredients before dinner service. Photography by Simon Bajada
SHARE

The first course of mattak, raw whale skin and blubber, is not for the meek. But with such a striking presentation—a cube-like parcel delicately interwoven atop a stoneware block—one can’t resist. Same with the Ptarmigan, a small bird served skewered to its own wing bone complete with snow white feathers and some partially digested crowberries (found in the gizzards) that help complete a blackcurrant salsa. At KOKS, a new restaurant on the west coast of Greenland, these dishes epitomize the product of place.

After nearly two decades largely steering the direction of the culinary world, locavore fine dining has reached what some could say are the limits of destination-based food experiences. And yet, since COVID-19 anchored everyone and continues to affect food supply chains around the world, the locavore movement’s ethos of sourcing what you eat from your immediate surroundings is newly relevant. One restaurant that has slowly, quietly been building on that idea while remaining relatively removed from the hype (and based way outside any urban center) is KOKS.

Earning two Michelin stars in 2017, the establishment has made a name for itself in fine dining, despite (or very much because of) its ultra-remote location. After four years at its Faroe Islands outpost (where sister properties ROKS and Raest are also based), KOKS uprooted to Greenland in June. “We had talked about the idea for a while,” says chef Poul Andrias Ziska of opening in an even more secluded place—the small settlement of Ilimanaq (population 56; now 88, with the KOKS camp set up). “We knew it would be a challenge but couldn’t resist the opportunity.”

Depending on the density of icebergs in a given season, Ilimanaq can be accessed by boat roughly 45 minutes south of Ilulissat, the largest town in the area. Private (and some scheduled) charters weave their way through the nearby Ilulissat Icefjord, a UNESCO World Heritage site, which feeds into Disko Bay and fragments into mesmerizing icebergs, some as tall as 165 feet. Nature decides here—boats, flights, roads, and deliveries are at its mercy. And yet: word travels, things connect, you get there. The journey is long, but life affirming. As Ziska tells me, “Now that I’ve experienced the trip here myself, I feel honored that others visit us. It places pressure on me to give them the best meal I can.”

Fortunately, sourcing ingredients that lie right at your doorstep (if you do a little digging around) is what Ziska knows best. The 32-year-old chef, who was born and raised on the Faroe Islands, was in the early stages of his career when the New Nordic was in full bloom. The movement’s manifesto sought to encourage chefs to use ‘closer to home’ ingredients—and “of the four to sign was Leif Sørensen of Faroe Islands,” Ziska reminds me. “As a kid I used to pick sorrel and my mother would make sorrel soup, which I really liked,” he recalls of growing up foraging on his native island’s rugged terrain. Ziska is a true ambassador for the way of cooking that has put Scandinavia on the culinary map. Feeding visitors from-the-land dishes is in his blood.

Seating 30 diners, the new KOKS location is housed in one of two buildings on the island that are part of Ilimanaq Lodge, which also accommodates guests in a handful of A-frame huts overhanging the rocky shoreline. Considered somewhat of an architectural feat for the standards of the time, the main Scandinavian-style notch building was built in Copenhagen in 1751, then transported to and reassembled in Ilimanaq—a kind of flat-pack of centuries past. Now, framed by soaring rafters, the ceilings are lined with olive and pale blue canvases thought to be from old sails that were unearthed beneath the thick-planked, uneven timber floors.

A strong sense of place carries through over the 18-odd-course dinner. Following the mattak dish comes a course of blue mussel, cradled by a seaweed tartelette that resembles nori paper but is actually sea lettuce painted with seal blood. (“It makes it crispier,” says Ziska, who was inspired by a Greenlandic tradition of elders eating seaweed with the blood.) Later, an otherwise deep-flavored musk ox broth is refreshingly sprightly thanks to the inclusion (both infused and whole) of local blackcurrant. A reindeer tartare with fermented mushroom and wild garlic sits atop verdant lyceum, moss, and greens. The garnish appears (and almost tastes) like truffle shavings but turns out to be air-dried reindeer heart. Preluding the sweet courses, a zingy lovage parfait featuring pickled pine needles takes on a strikingly similar texture to fine grated coconut. While a mousse-meets-crumble mimics an off-the-shelf treat (in the best way) but is in fact made from kombu, celeriac, and oat.

Later on in the evening, Ziska’s business partner and sommelier Karin Visth tells me, “To come somewhere this isolated and set up the team has certainly been an experience.” A Swiss native, she answered an ad to work at the original KOKS with little knowledge of the Faroe Islands. “I love Swiss food but it’s slow to develop; I wanted to work with progressive cuisine, and I love nature, so it felt right,” she explains. After steering the KOKS ship with Ziska for the past eight years, Visth has assembled a skilled group where one can already sense camaraderie amongst the nationals of 14 countries.

For this new project, team bonding started out of necessity the moment everyone arrived just over two weeks prior to opening. To accommodate the ambitious menu, there was meant to be a second kitchen built outside the lodge, but  construction was late to start. “We saw the state of the building and we freaked out a little,” recalls Danish waiter Caroline Løbenstein Vegeberg. And so, everyone took on an array of tasks, including the wait staff donning aprons to help the kitchen. “I sliced celeriac for pickling for practically a whole day,” says Norwegian waiter Markus Lilleheil, “[but] it may not even last the season!” Two hours before the very first service, the team was (miraculously) ready to go.

Of course, not everything lined up exactly in time. A dish of salmon, sandwiched by crackers made from its skin, had to be retrofitted because the anticipated local trout was absent after an unusually long winter. “They are coming,” assures Ziska, “and soon there will also be an explosion of green buds, berries, and flowers.” Wary of Greenland’s climate and any potential troubles the kitchen could have faced in the first few weeks, he had packed suitcases full of ingredients from the Faroes as a fail-safe. But as Ziska learns the ebb and flow of food cycles, he’s finding his footing on this new island. “The menu will change with what’s available,” he says.

Sometimes, that means bigger news than a plant coming into season. Within days of arrival, Ziska was tipped off by a local working at the lodge about a Bowhead whale that had been caught up the coast. Greenland caps the catch of this particular species to only two per year, so the event was rare—even more so since it was the first catch on this particular stretch of coast in the past decade. The cousin of the hunter ferried Ziska up to the slaughter, where the chef purchased a portion of the precious meat. At the restaurant, a morsel (30g to be exact) is accompanied by a traditional hunter’s knife in a nod to its origins. The glaze, made from blue mussel and beetroot, resembles teriyaki. And the meat is so tender, the knife is barely needed.

Likewise, a series of delicate seafood courses, including shrimp, scallop and snow crab—amongst which fried shrimp heads provide textural fireworks and Greenlandic horseradish adds extra kick—are a highlight. Ziska tells me he may have found a local diver (who are harder to come by due to specialized gear and smaller seafood yields not being worth the upstart costs for launching a commercial business). “I’m excited because there are definitely sea urchins and huge scallops down there, who knows what else we will find.” Though fish, seal, whale, and prawns feature prominently on Greenlander dining tables, other shellfish are less consumed. “Hopefully,” he adds, “we can show residents more of what’s available to them.”

So far, local reception for the town’s new part-time residents has been warm. “We like to have visitors,” says Ove Willadsen, whose family has deep roots in Ilimanaq—adding the caveat that the occasional cruise ship offloading more than 1,000 passengers can get to be “too much.” For Greenland’s national holiday on June 21, the KOKS team celebrated with their hosts by serving Arctic char  alongside the traditional offerings of seal soup, reindeer, and fried halibut.

Considering that wine stock has been stuck in customs (the international drinks list is the only section of the menu that disregards sticking within geographical borders); the second kitchen is still incomplete; the trout are lingering upstream; and the buds are yet to bloom, the logistics and outcome of KOKS are a triumph.

With a short summer of three months on the island, reservations for 2022 are quickly filling up. “Even if we want to extend past August we can’t; the ice won’t allow it,” says Visth. KOKS will return in the same location next summer—but beyond that is unknown. Here in Greenland, Mother Nature ultimately dictates how a restaurant will be run.

Flights: Fly to Ilulissat with Air Greenland via Reykjavik, Iceland, or Copenhagen, Denmark.

Boat: Take the shuttle to Ilimanaq.

Accomodation: You can stay at Ilimanaq Lodge, Hotel Arctic, or Hotel Icefiord.