The Revival of an Under-the-Radar Idli from Kerala 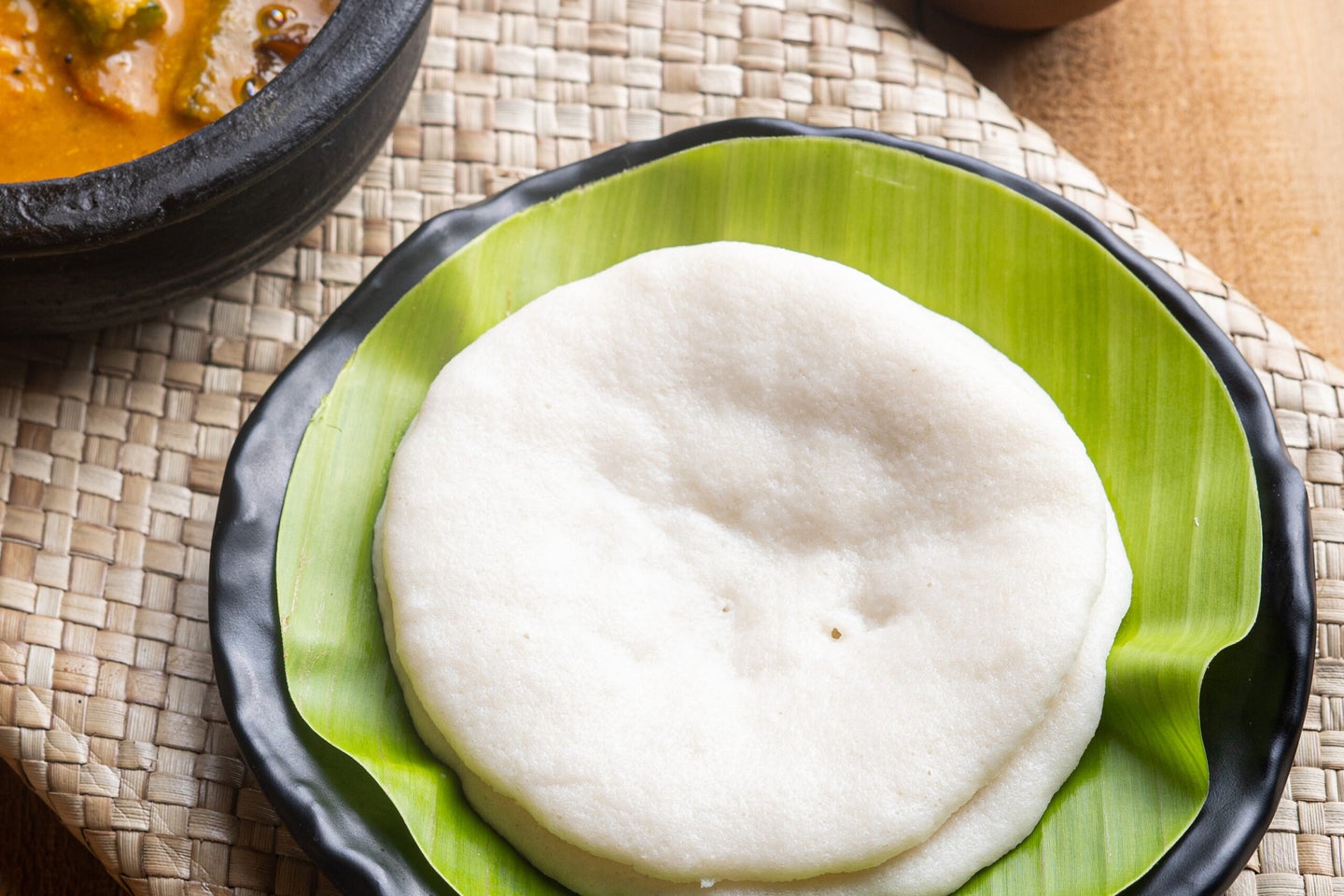 In 2018, S Jeevanandan migrated from the Kerala village of Ramassery to Chennai, a sunny city in the state of Tamil Nadu over 300 miles away. A former tea stall owner, Jeevanandan now has a job at the one-of-a-kind restaurant Kappa Chakka Kandhari. The kitchen there is partly run by a motley group of home cooks who specialize not only in skills, but also in specific Kerala-style dishes. Jeevanandan’s forte is Ramassery idlis, of which he makes 300 every day, and his family is one of only two in the world that still makes them in the traditional way, and in the dish’s place of origin.

Kappa Chakka Kandhari is an award-winning restaurant co-founded by chef Regi Mathew that specifically employs “special-skill cooks” like Jeevanandan. On a given day, approximately 20 chefs work together to cook their signature dishes for patrons. The restaurant came as a result of Mathew’s research tours that brought him to 265 homes and 70 toddy shops across Kerala over a three-year period. He embarked on these trips to procure the best-quality tapioca, pepper, coconut, chiles, rice, and other ingredients emblematic of Kerala—and also to archive approximately 800 homestyle recipes from across the state. It was during one of these trips that he chanced upon Jeevanandan and his Ramassery idlis.

Idlis are steamed savory cakes made from rice and lentils and probably originated on the Indian subcontinent—though theories about the dish’s creation do vary. Some believe it arrived in India from present-day Indonesia around 800-1200 CE. Other historians claim Arab traders introduced it to Indians in the southern belt of the country during the 7th century; to avoid confusion around what food was halaal and what was haraam (forbidden), the traders began to roll rice balls, which were easy to make. But Mathew says he has a hunch that it was in the 10th century, during the Chola Dynasty’s expedition to East Asia, that South Indians acquired the technique of steaming black gram and rice—which eventually became the earliest idlis.

Today, there are more than 50 varieties of idli across India, including both modern and traditional interpretations. According to Vijay Kumar, a chef and partner at the Indian restaurant Semma in New York City, “One of the oldest uses of the idli batter led to Kanchipuram idlis that come from the city of Kanchipuram, Tamil Nadu. It used to be served as prasadam—sacred food of the temples—and what separates them is the flavoring of black pepper, cumin seeds, ginger powder and mustard seeds.”

Like Kanchipuram idlis, the majority of India’s idli varieties come from the state of Tamil Nadu, where most are made from rice. “Then there are others like rava idli—made out of semolina—which originated in a popular eatery in Bengaluru, Karnataka called Mavalli Tiffin Rooms,” says Sanjay Rawat, chef de cuisine at The Ritz-Carlton in Laguna Beach, California. “During World War II, when India was under a political emergency, the shortage of rice led to the chefs innovating and creating a new version of the dish. Another variety from Karnataka is thatte idli, which is made on a plate instead of an idli cooker.” (Thatte is the Kannada word for plate.) In South Kerala, Rawat adds, another variety is millet-based and uses no rice.

As for Ramassery idli, this variety is made from rice, lentils, and fenugreek soaked for a few hours, then ground in a wet stone grinder and fermented for six to eight hours. What separates it from other varieties is that it is flatter and spongier than regular idlis. It also uses a scented variety of rice called Iruppu chamba (more common idli varieties are usually made from a rice called ponni). When the Ramassery idlis are ready to be served, they are turned directly onto a plachi leaf instead of a plate or a bowl.

Ramassery idli is a rather unusual dish for Kerala, where the cuisine is known for aromatic meat curries, parotta and appams. “Ramassery idli was brought to Kerala by the Mudaliar sect, a weaver community who journeyed from the Thanjavur region in Tamil Nadu to Kerala around 200 years ago,” says Mathew. As these artisans moved around selling their weaves, they needed to carry sustenance on their long journeys, and idlis had a shelf life of three to four days. Eaten along with podi and gingelly oil, it was their ideal meal for the road. Today, idlis continue to be a source of nutrition during long journeys. “The Defense Food Research Laboratory in India declared that moistureless idlis, with sides of sambar powder and coconut chutney [are] to be packed for astronauts to take to space,” notes chef Rawat.

The Mudaliar weaver families eventually settled in Ramassery, a small village on the outskirts of Palakkad, and this style of idli became a village staple. Over the years, the industrialization of weaving in India threatened the artisans’ livelihoods, so Mudaliars shifted their source of income to focus on running tea shops and selling idlis to villagers and travelers who passed through Ramassery.

Ramassery idlis are cooked not in metal steamers but in curve-necked earthen pots. Because earthenware is porous and holds moisture better, these pots result in spongier idlis. The pot is lined with earthen rings, which are woven with thin cords to create a web-like structure on which a muslin cloth rests (a clear connection to the Mudaliars’ former vocation as weavers). The fermented idli batter is ladled onto the muslin-clad ring, and these rings are then stacked inside a pot filled with water. When it’s time to cook the idlis, the pots rest over a live fire made of tamarind wood. “In such a vessel, the steam travels right through the thin cloth, all the way to the top, and then the trapped steam comes running down, which results in air-soft idlis,” Mathew explains.

Today, only two families descended from the original Mudaliars are preserving this legacy and passing it on. Both these families have a combined 17 descendants who are involved in running stalls that sell the Ramassery idlis. S Jeevanandan’s brother Shankara Narayana Mudaliar currently heads their family stall, Shankar Vilas, while Chithrayan Mudaliar is the successor running the other family’s Saraswathi Tea Stall.

For Mathew, including dishes like Ramassery idli on the menu of his restaurant not only gives diners a taste of a bygone era of Indian cuisine, but also preserves foods that may otherwise be lost to time. “The generation before me made them, and the next generation will have no access to them,” he says. Feeling responsible to preserve those unique slices of culture and cuisine, he decided to help them live on—“before it goes extinct.” Mathew feels that Ramessary idlis are especially at risk of fading away because they are complex to make. Each earthen pot can only make three idlis at a time, while a regular steamer can usually accommodate many more.

Similar to how the Mudaliars paired their idlis with gingelly oil and podi powder, Mathew’s restaurant serves Ramassery idlis with a helping of podi, a dry powder made from Palakkadan matta (a variety of red rice) and spices like chillies, asafoetida, and curry leaves. According to Mathew, other modern ways to serve Ramassery idlis are with dishes like sambar (a stew of lentils and vegetables) or chicken curry.

Across India today, Ramassery idlis are beginning to spread—thanks in large part to Kappa Chakka Kandhari, which was among the first to serve Ramassery idlis in a restaurant format. Idlis are now popping up in eateries across Kerala and Tamil Nadu, on wedding menus, and several home cooks on YouTube have been demonstrating the technique for their viewers.

Whenever he gets the chance to return to Ramassery, Jeevanandan trains his eager 16-year-old son, who is next in line for his role at Kappa Chakka Kandhari, to make Ramassery idlis: “Of course, once he completes his studies, he will be offered the job—and if he is still in the mood to make idlis,” says Mathew.

Over the last 28 years that he has been cooking, little has changed about the way 50-year-old Jeevanandan makes idlis. “The cooking technique has not changed at all, but the crop of rice from the same paddy field in Ramaserry has changed. It’s less starchy these days. Also, we used to grind the batter in a manual grinder, now it’s mechanical,” he says. And he is happy and proud to be cooking this dish for the rest of his life. “This was handed over to me by my father. It is a legacy recipe. These idlis saved us when weaving stopped, and I consider myself lucky, the chosen one, its guardian,” he says.