This All-Female Gin Distillery Is Shaking Things Up In Portland

In a male-driven industry where origin stories come second to production, these ladies are breaking new ground 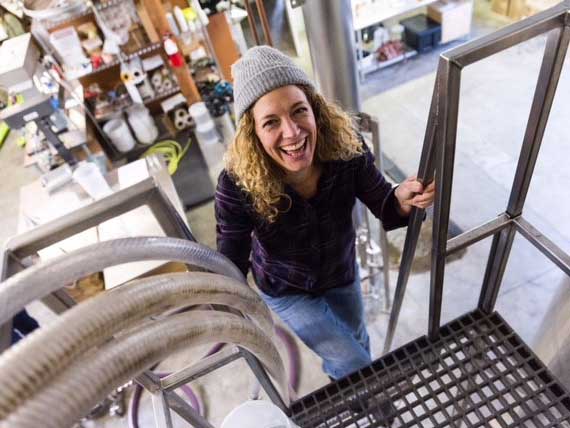 Jill Kuehler never anticipated she’d swap a career in food education and access advocacy to gin. But when an unexpected trio of Portland women aligned, that’s exactly what happened. Kuehler worked on the idea behind Freeland Spirits, a small-batch Portland purveyor of herbaceous gin, for over three years before launching. And once she had the concept, she went about establishing a dream team of women to help shape her new product. “I was really excited about having an all-woman team, from who grows the grains and botanicals, to the distillers,” Kuehler says. And in a male-driven industry where origin stories come second to production, they’re breaking new ground.

Kuehler first worked as the director of Zenger Farms, an educational nonprofit farm in East Portland, but she always planned to launch her own spirits business. “I didn’t really see many craft brands telling the story of where the ingredients in their spirits were coming from,” Kuehler explains. “Using my agricultural background, I thought it could be really fun to launch a brand that tells that story, of the farmers involved.”

She started with her friend Cory Carman, the force behind Carman Ranch in Eastern Oregon. She was the first person with whome Kuehler shared the idea for Freeland Spirits. “Cory said, ‘Oh my God, I’ll grow the grain!’ She always wanted to incorporate small-batch grains into her ranch, but there wasn’t an obvious market for a small-scale production, so this was a great fit,” Kuehler recounts.

Kuehler was then introduced to Molly Troupe, who joined Freeland in summer 2017. Troupe, who spearheads the distilling process, decided to tinker with a Rotovap, a rotary vaporator used to infuse flavors, utilized in tandem with traditional distilling techniques to “really elevate” the gin. The Rotovap distills at a lower temperature, which makes for fresher spirits. Some Rotovap experiments were a bust: “The weirdest thing I tried was balsamic vinegar—that did not go well—and we also tried Szechuan peppercorns, which was interesting,” Troupe recalls. What did make it in: cucumber, rosemary, mint, and thyme, “all used in their fresh states, which is pretty unusual.” Distilling involves 12-hour days, complete with playlists featuring plenty of Beyoncé. “Molly is insistent that music plays during distillation—she sincerely believes it improves the quality,” Kuehler explains. Once a batch is distilled, the bottling process becomes a friends and family affair: “I don’t think Molly’s parents have missed a single bottling,” Kuehler says.

Freeland debuted the first fruits of its labors—meant to invoke a garden’s flavors, housed in elegant, distinctive blue bottles—in December 2017. Then, the trio opened the distillery to the public for tastings and tours in July 2018. “Gin is a whole different ball game than whiskey: you get to play with as many different botanicals as you choose and create a really special flavor wheel,” Kuehler says.

The team expanded further in May 2018: Jesse Brantley, Kuehler’s childhood best friend, a sommelier with restaurant management experience, joined Freeland to run sales and the tasting room. That tasting room is meant to be “really experiential,” saysTroupe, as she thinks spirits education (specifically about gin) is pretty limited. Botanicals used in Freeland Spirits’ gin grow right outside the tasting room, and are featured in drawers inside the space; tastings happen close to the “beautiful 500-gallon copper pot” their herbaceous gin is distilled in.

The name Freeland Spirits is a nod to Kuehler’s grandmother (a.k.a. Meemaw), whose surname was Freeland—”she was a huge inspiration to me, she was the breadwinner in the family; such a hard worker—and my interest in agriculture really came from her,” Kuehler says. “She really showed me that all the good things in life come from scratch.” The homage has nothing to do with grandma Freeland’s libation preferences, though: “Meemaw never touched a drop of booze in her life, and now has a spirit brand named after her,” Kuehler recounts with a laugh. “I grew up helping Meemaw in her garden in Texas, so we were thinking a lot about what gin from Meemaw’s garden would taste like; that was the impetus for using fresh ingredients.”

Freeland Spirits’ sense of levity and cheekiness is pretty unusual in the spirits world—and by design. “There are so many men who just want to make booze, and I didn’t see the origin stories or much personality coming through,” Kuehler explains. “It’s a really, really hard industry: there’s so much capital required, and the waiting time, especially for whiskey, makes it a next to impossible business to be in, so humor plays an essential role,” she says, also noting “Spirits have a darker side, the connotations of booze are of backroom deals, and I wanted to approach the industry from a place of transparency, supporting women, having a community layer, and supporting non-profit partners.”

Currently, the latter has taken shape as donations to organizations like Planned Parenthood—but Kuehler hopes to use her nonprofit background to build it into something bigger. “I really want to avoid one-off donations, the one-time $500 check that takes up more than $500 of your time to put on an event and accept that check; I want to do something more authentic,” she explains. That might take shape as donating a portion of proceeds from each specific spirit to different nonprofit partners, for the lifetime of the product (be it gin, bourbon, or whiskey), not just as a seasonal or isolated gesture.

The blue bottle, sporting a label of “a super confident, empowered woman reaching for what she wants, almost goddess-like,” as Kuehler describes, was created by Dando design, a Brooklyn-based company. “We were creating such a beautiful product, it was so important to me to have a beautiful bottle to be in—Molly’s gin deserves a beautiful bottle!” Kuehler says. Currently, Freeland is in over 20 Oregon liquor stores—“it’s been amazing how excited the liquor stores are; they’ll say, ‘We need more women in this industry!” Kuehler says. In April, they began distributing to a handful of California stockists, though the goal is to keep things more gradual and organic, focused on the West Coast throughout the next year or so, then doubling down on national distribution—and, within five years, hopefully international distribution as well.

“Working as a woman in this industry has its challenges; there are definitely days where you have the strangest encounters,” Troupe says. “There’s often disbelief that I’m actually in charge—or in production at all. A lot of people just assume that you’re just a face and you don’t actually do any of the hard work. The best way to handle it is to show them what you do know.” Fundraising as a female small business co-founder has been enlightening and frustrating, per Kuehler. “I’ve learned that 95% of commercial bank loans go to men, and 97% of venture capital money goes to men, while 30% of businesses are run by women,” Kuehler says, “It’s shocking that that’s still a reality.”

In the near future, Freeland plans to roll out another style of gin “really focused on the grains,” Troupe says. “The plan is to have fun, experiment, and try new things! One of the things I love about this industry is how playful it can be, and that’s definitely encouraged at Freeland.”