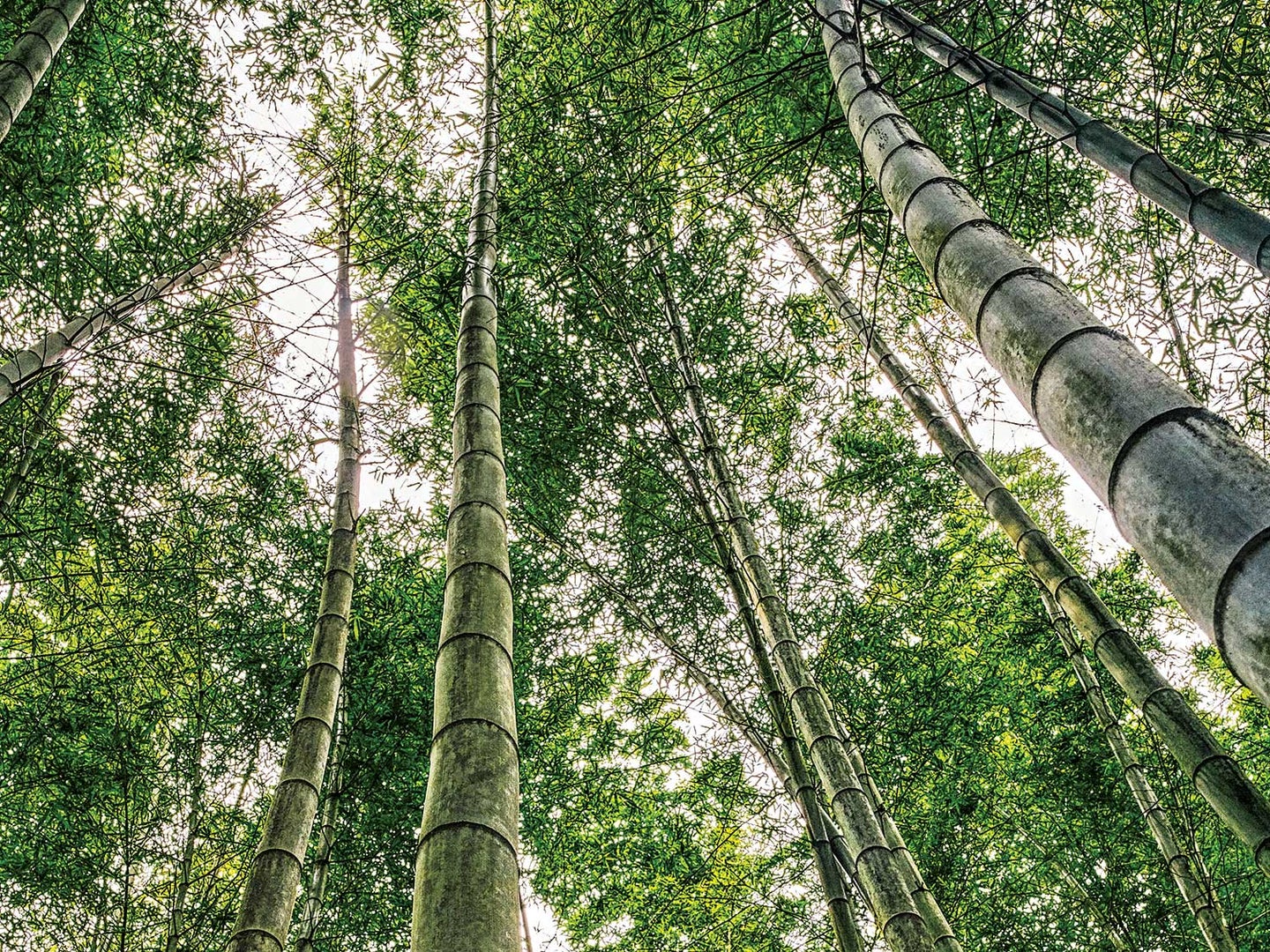 In a maze of green, Xiao Zai Hui’s vivid red hair is a beacon. Her ebullient laugh is a guide through the dense, vertical foliage of 40-foot bamboo stalks. It’s been four years since she began a life of harvesting bamboo here—on a plot of land her husband’s family has owned for generations—and her skills are sharp. She stops and crouches at the base of a towering bamboo stalk, searching below the soil for a shoot that’s yet to break the surface.

Though the bamboo must be dug up from under the soil, Xiao begins by gazing upward. The key to finding the ripest, biggest shoots is identifying the plants with the leafiest tops.

The bamboo she finds here in China’s Shunan Zhuhai National Park, in Sichuan province, will be the base for a variety of her favorite soups and stir-fries, many of which she will prepare for the touring guests she and her husband, Chun Wein, host in the spare rooms of their home. A hotel of sorts, catering to the quickly growing population of Chinese urbanites looking to escape the dense crowds of their home cities, this type of country home has its own special name: long jia le (“le” here means “happiness”). In the park, which encompasses Xiao’s family’s house, the 11,000 acres of preserved land filled with wild-growing bamboo is known colloquially as the Bamboo Sea. It was once an untouched paradise that only locals ventured into—20 years ago, Xiao and Chun would walk a narrow, mossy footpath along the unpaved roads to his family’s ancestral home—but these days, tourists arrive by the busload, seeking seclusion and fresh air, and helping to create a new industry for bamboo gatherers like Xiao and her husband.

Although the plant grows year-round, Sichuan bamboo is harvested in two distinct seasons. Springtime shoots, called chun sun, push through the soil, exposing themselves for would-be harvesters to easily find. In winter, harvesters dig below the ground for the new shoots yet to emerge, called dong sun. Come summer, the shoots, which look like densely packed conical flower buds, develop into thick, towering, inedible stalks. The mature bamboo grows in dense clusters that weave along a thick, cordlike root, and doesn’t put out leaves until it’s reached its full height. To the untrained eye, the leafy tops all look the same, but Xiao can identify at a glance which stalks have started to develop their underground dong sun.

When she finds a spot, she takes her chu tou, a heavy wooden pick, and begins her search through the soil with short, shallow strokes, careful not to damage any part of the plant. She digs up a shoot, a golden cone roughly 6 inches long, and tosses it into a woven basket, then continues to dig. New shoots grow off the mature rhizome­—which branches out laterally, almost like a ginger root—so Xiao knows she will find them close together. As she unearths more, she rips them from the ground and tosses them over her shoulder into a basket with a move both natural and practiced. At the end of the day, she’s found 12 pieces of different sizes, most of which came from the same root. Xiao says that this is a particularly good haul.

Because of its visibility in spring, much more bamboo is harvested at that time than in winter. Xiao looks for spring shoots about as high as her knee, but any taller than that and they will soon be on their way to becoming as tall as trees. The bamboo grows so rapidly here that a waist-high shoot could surpass Xiao in height in the span of just 24 hours. The abundant spring shoots are typically peeled and promptly steamed to preserve their freshness, and Xiao will slice these steamed pieces and dry them in a wicker basket for future cooking. Winter bamboo, however, is more elusive. If it breaks through the surface, it will rot and die in the cold, which makes it all the more precious. Bamboo harvesters can make significantly more money off winter shoots than spring ones.

Spring bamboo can be peeled quickly with a few strokes from a cleaver, the shell falling from the shoot to reveal a tinge of purplish pink. Peeling winter shoots, however, is more involved: Xiao will take a cleaver to the bottom, pulling it and any dangling roots off with a sound like ripping Velcro. Then, she’ll make a slit from the bottom to the tip, peeling back the outer layers like an onion until all that’s left is a snowy white cone. She’ll deftly slice off any tough, brownish parts, and the remaining shoot is ready to cook.

Unlike the sweeter, more subtle spring shoots, cold-weather shoots are a bit hardier, with a more complex flavor that tends toward bitter. Depending on household preference, some people will boil it right away to tame its intensity, while others believe the bitterness is tempered elsewhere in the cooking process. To Xiao, a root that tastes distinctly bitter is a root that’s been poorly prepared.

She and other home cooks use shoots from both seasons interchangeably in their dishes. Once cooked, their textures and flavors are quite similar, if somewhat difficult to describe. Xiao always comes back to xuan, a Chinese word with no English equivalent, but that evokes a complex savoriness akin to umami. Chinese cookbook author Ken Hom describes the taste as “fresh, almost grassy, and sweet.” It somehow straddles all of these, in addition to absorbing and enhancing the flavors of the ingredients it’s cooked with, especially in broths, hot pots, and soups. You can seemingly boil it forever without it losing its crisp tenderness, combining a mushroomlike chew with a surprising snap.

The bamboo sea is located in the heart of Yibin, a prefectural city in Sichuan with a total population of around 4 million. In Chinese, Sichuan province is often referred to as tianfuzhiguo, or “the land of plenty,” for its fertile soil and agricultural diversity. It’s earned a global reputation for spicy food, but the flavors here are nuanced; mala, for instance, which refers to the local blend of fiery chiles and numbing Sichuan peppercorns, is a balance of floral, almost citrusy flavors ignited by a deep, intense heat.

In Yibin and nearby Chengdu, Sichuan’s capital, just a few hours’ drive away, bamboo is everywhere—and not just in the kitchen. Trucks carry bundles of the sturdy stalks through the streets of nearby towns. They are used to make everything from building scaffolding to broom handles, chopsticks to chicken coops. For Xiao and Chun, the bamboo has also helped keep their family together.

The two met while working in factories in Shanghai, Xiao having left her family’s small-town farm near the Bamboo Sea in search of greater opportunities. When their first child, Chen Xingyu, was born, Xiao moved back home to take care of him, while Chun lived and worked in the city to support them—a situation all too common among Chinese parents of their generation. Chun worked hard, and Xiao ultimately brought Xingyu to join him in Guangzhou, where they had another child, despite the heavy fines imposed when China’s strict one-child policy was in place. Their income was comfortable, but they missed their families back home, and by 2014, they had saved enough to build a new house on Chun’s family’s land in Yibin—­making a living from harvesting the abundant bamboo and renting their spare rooms to the growing groups of tourists. Xiao laughs as she recalls how naively she once wandered through the forest when she was first learning to forage here, digging fruitlessly for winter bamboo, only to have someone else find a treasure trove of the bright young shoots just a few feet away. It’s an art, she has learned, that takes time and practice.

Running the family’s guesthouse, Xiao also came into her own as a cook, preparing simple, local specialties—most of which include bamboo in some form—for their tenants throughout their stay. She took a cue from nearby restaurants that serve xiong mao yan, or “panda meal,” an extravagant spread meant to emphasize the variety of ways you can cook and enjoy bamboo. Depending on the season, almost all of the dishes incorporate winter or spring shoots, either the fresh ones displayed in heaps at small markets, or packaged versions: parboiled and ready to use, or dried, to be reconstituted in water.

But the pale shoots are hardly the only item on local menus. A few varieties of edible fungi that grow exclusively on bamboo are prized here, not unlike European truffles. Locals have tried for ages to cultivate and farm this fungus, Chun explains, but so far it has proved impossible—it springs up at random due to the unique conditions of the environment.

One particularly rare and expensive version is called zhu sheng. The mushroom, which has a life span of just half a day, begins as an “egg,” partially submerged beneath the ground. Xiao says this stage, called zhu tai, is the most precious, as its window for harvest is extremely limited. “The people who search for this fungus know when this will happen,” Xiao says. “During just two hours in the morning on the day they’re growing, they’ll be on the lookout.” Once harvested, it must be dried immediately to prevent it from distintegrating. From the egg, a dark brown cap rises upward, before the mushroom sends out a lacy veil around itself. The cap is called zhu maodu—which means “tripe,” named for its similarity in texture—and is often used independently in regional stir-fries.

In the kitchen at Qicai Shanzhuang, a restaurant near Xiao’s home, shelves are lined with more than a dozen containers filled with bamboo—both spring and winter shoots—and bamboo fungus. The pieces range in color from a translucent tan to dark brown; some fungi are porous like a honey­comb, others squishy and absorbent like dark-green sponges.

“The beauty of bamboo,” Xiao says, “is that it’s extremely versatile, and adaptable to taste.” In a popular bamboo soup, which is also cooked with the veil and stem of the zhu sheng, the bamboo absorbs the flavor of the bone-in chicken broth as it cooks, while also infusing the delicate soup with its fresh, grassy essence. The mushroom, cooked in the milky-colored broth, becomes chewy and tender, while the veil, which has softened until it melts in your mouth, is spread out across the top like a white web.

Bamboo shoots are cut into a variety of shapes and tossed alongside the fungi into stir-fries, which vary among cooks but nearly always include some form of chiles, pickled ginger, and garlic. Popular combinations also include sweet peppers and locally foraged hua jun, or “slippery mushrooms,” while more ­exceptional versions might feature la rou (cured, smoked pork belly) or grubs. And, of course, there are plenty of sides to go with these dishes, such as you cai, a stalky green often simply stir-fried with chiles, garlic, and Sichuan peppercorns.

Cooks in the area also use the bamboo stalks and leaves too. Along the perimeter of the Bamboo Sea, a man had built a contraption out of two bamboo ladders and a bar strung across them hanging over an open fire. Suspended from the bar were pork ribs being prepared in a popular but painstaking way—slow-smoked over burning bamboo stalks for 10 days or more. Outside his small cottage, the smoke rose upward, swirling into the bamboo’s leafy green heights. 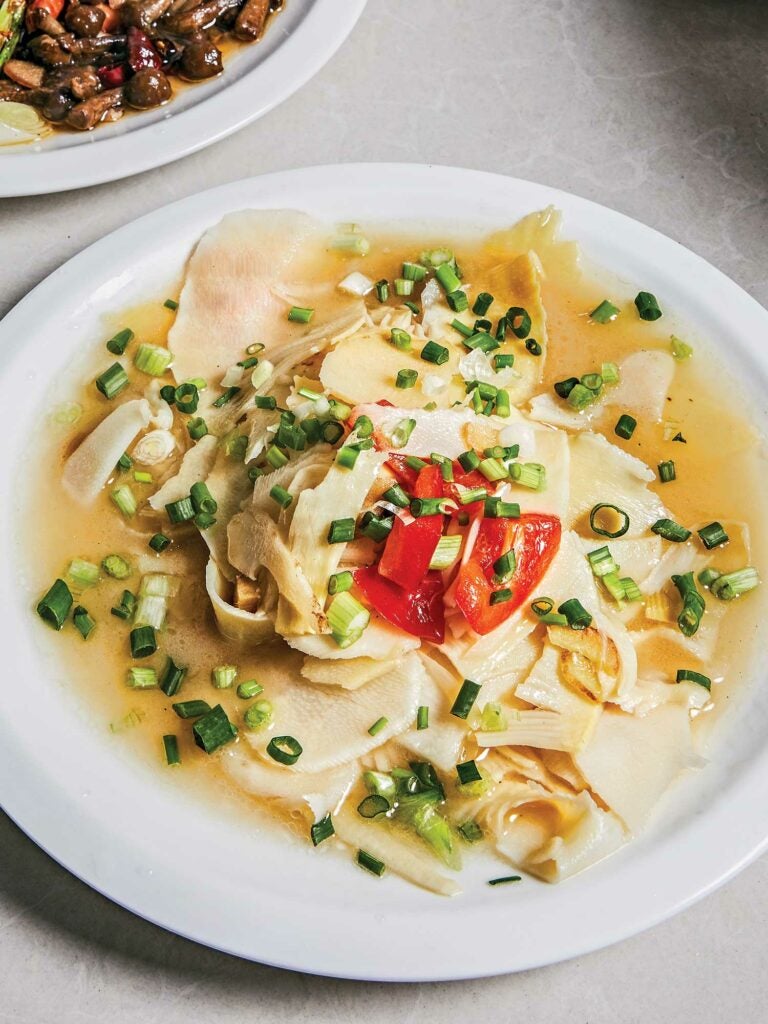 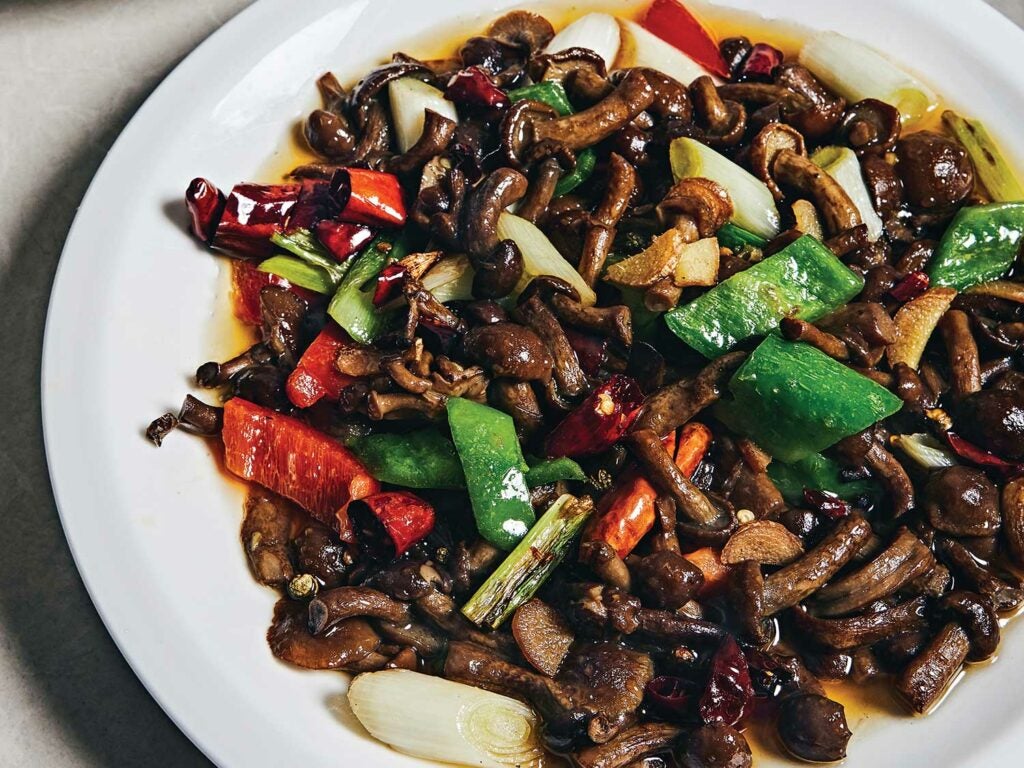 Hua jun, or “slippery mushrooms,” from Sichuan’s Bamboo Sea are quick-cooked over high heat with a trio of chiles (sweet, spicy, and pickled). 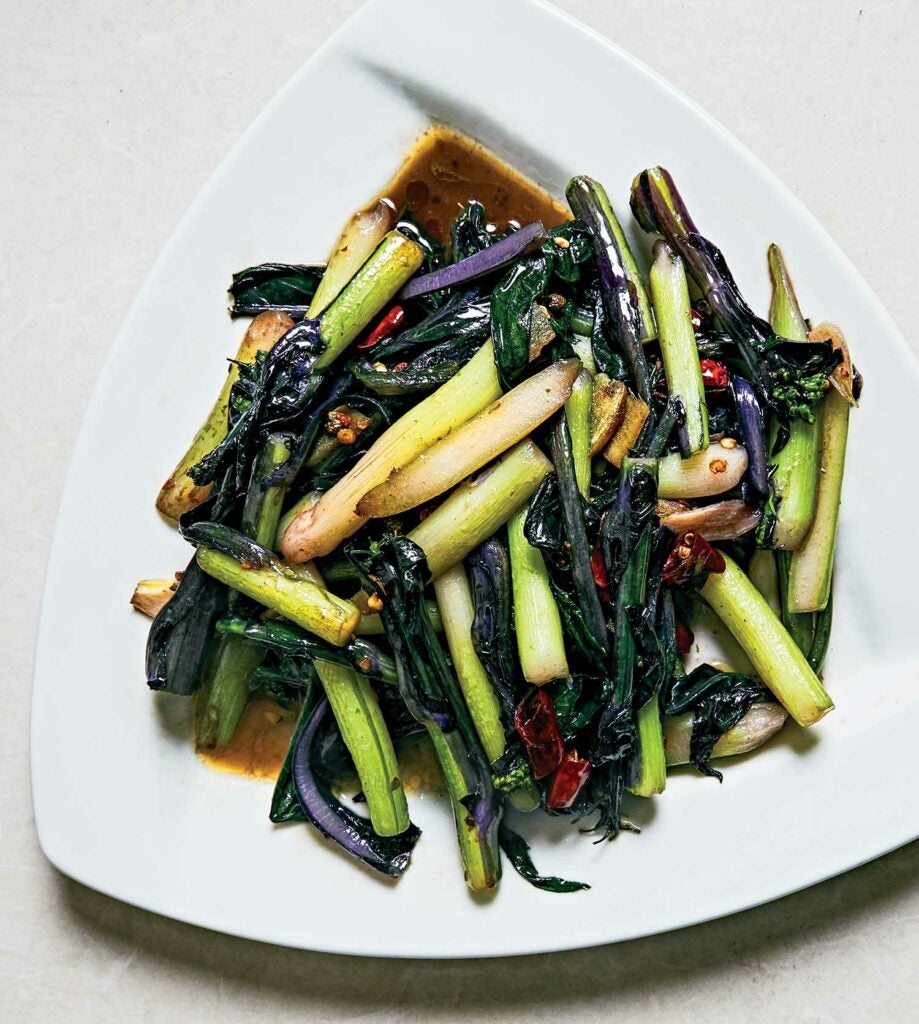 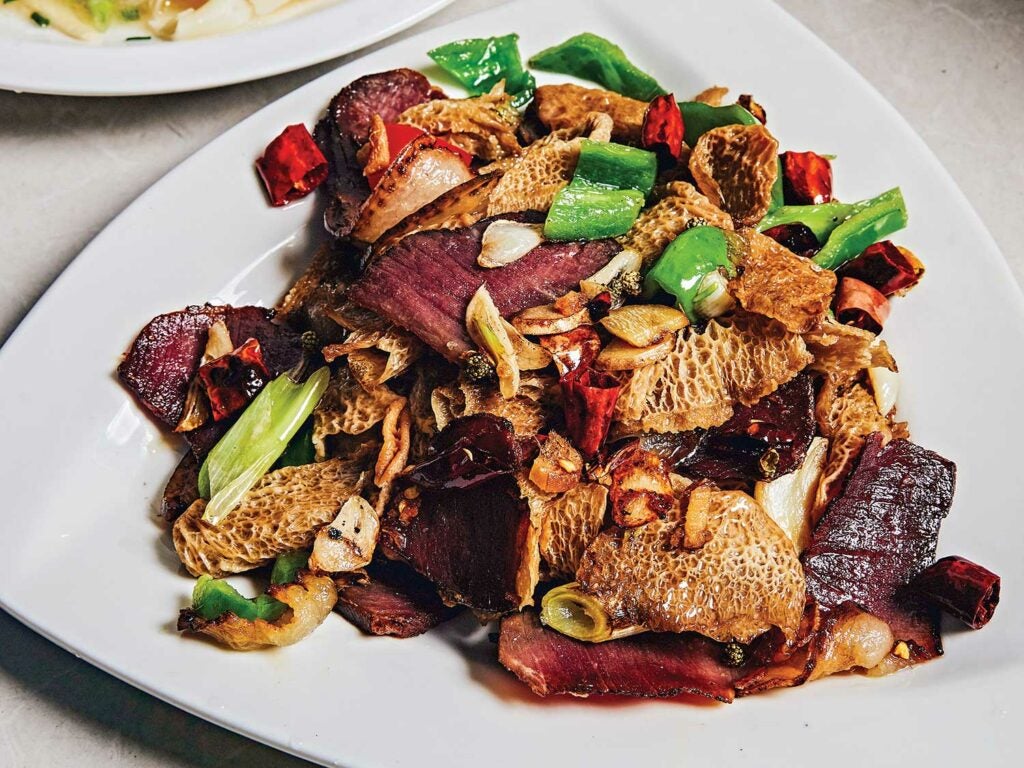 While this dish is traditionally made with bamboo mushrooms called zhu maodu, morels are a great substitute—and an excellent foil for the rich Chinese bacon and salty, spicy Pixian broad bean chile paste. Get the recipe for Chinese Bacon and Morel Mushroom Stir-Fry 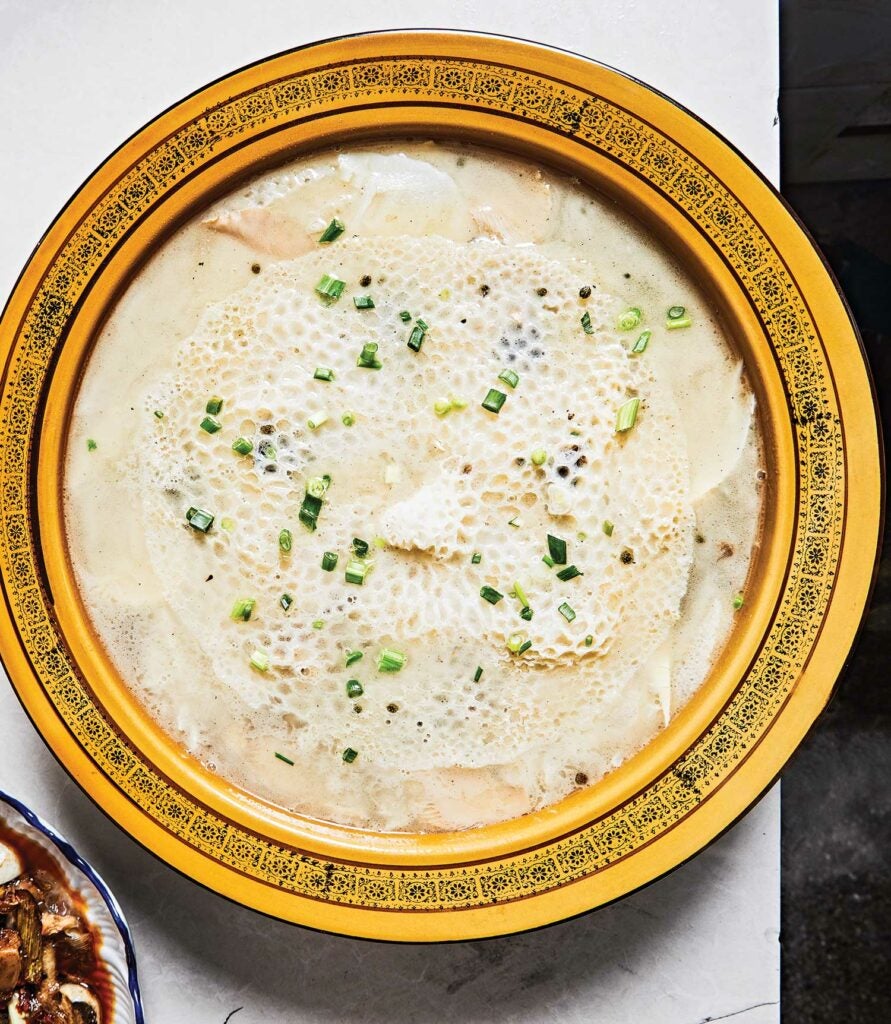