In Castelluccio, the Lentil Harvest Must Go On

Despite a devastating earthquake, a small Italian town must keep its food traditions from fading 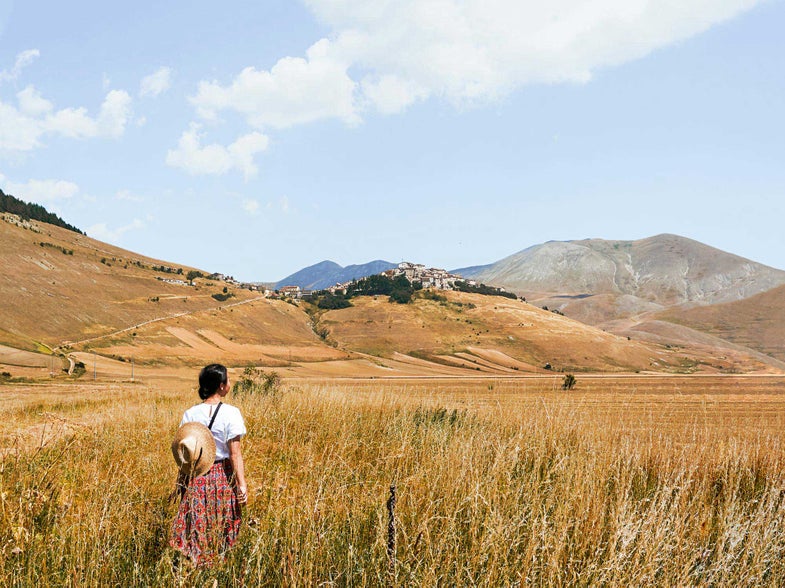 For centuries, the wildlife and people of the Eastern Italian commune of Norcia have had an intertwined existence, every individual benefiting from the delicate balance of a very special ecosystem. Much of the agricultural tradition here has passed largely unchanged from generation to generation. Farming here is organic in the truest sense of the word. A good portion of the valley surrounding the town of Castelluccio di Norcia is left unfarmed to allow the growth of wild plants. Each June, spring poppies, cornflowers, and other wildflowers bloom in wild profusion. These flowers encourage the existence of predatory insects that feed on pests that would otherwise decimate the farmer’s crops. The tall fields make for perfect hiding spots for mice and other small animals while the peregrine hawks and royal eagles continue their vigilant circling of the skies. Each member of this ecosystem is important, from the tiniest of insects to the largest of beasts. The story of Castelluccio is a tale of centuries-old traditions, of families farming ancient lands in much the same way their ancestors did. It is a story of the beautiful food that can come out of humans working in harmony with nature and, most importantly, it is a testament to the resilience of the people here.

After many dead ends in trying to arrange a meeting with the local farmers, just one week before I was to leave for my trip to Italy I had finally made contact with Sante Coccia, the head of the lentil farmers’ co-op. And with the help of Letizia Mattiaci, who runs a small bed and breakfast and cooking school in the area, I had found my way in. But as the day approached, I still had no real idea what to expect. It was pure coincidence that the day we had agreed upon was the same day as the the community’s festival celebrating that year’s successful lentil harvest. No small feat, considering that this part of Italy was devastated by a catastrophic earthquake in late 2016, and Castelluccio itself is sadly still uninhabitable. For the first time in centuries, the town almost cancelled lentil season.

As we bumped along the remote narrow road that climbed up to Castelluccio, the craggy rocks of the Sibillini Mountains rising up on one side and the picturesque expanse of green and gold farmland opening out on the other, I gazed out the window and watched a single horse and rider come galloping past tiny bales of hay spotting the valley into the distance. I immediately understood why, when asked how to find Castelluccio, a Norcia local had vaguely directed us to drive up the mountain—it will just appear and you will know you’ve arrived. The startling scale of these plains hugged all around by dramatic blue and purple mountains was a singular sight, unmistakable to any newcomer. It felt like we had entered into a secret universe.

Only three months prior to my visit, this road had been completely under rubble. It was only through vehement lobbying and the intervention of the Umbrian governor that the pass was finally cleared, allowing the farmers to enter the valley and plant the lentils on which the livelihoods of more than 100 families depended.

As I walked among the happy faces and spoke with the revelers at the festival, I could clearly see the pride that everyone felt towards this place and their work. In full regalia, gigantic harvesters were gathered in a cluster, showing off their might. Bright yellow tents had been erected and all around families had come together to celebrate the past year and to discuss the future. Under one of these tents, a delicious display was set up to show off the two star products this area of agricultural abundance is famous for. On one table was a mouthwatering prosciutto leg ready to be carved into diaphanous melt-in-your-mouth pieces. Gorgeously marbled salumis waited to be devoured. Next to the pork was a huge pot of humble lentils cooked simply with some tomatoes and aromatics. I like lentils but I would never claim them as a favorite. Until I took my first bite of the Castelluccio lentil, I had never really thought about the issues I often had with them: the uneven softness—some mushy, some hard—and the grainy skin. With each meltingly tender bite, I understood; it wasn’t that these lentils had been cooked in a new, secret way or that the sauce was out of the ordinary. Sure, the tomatoes were the best an Italian summer could offer, but it wasn’t the cooking that made such a difference in the taste. It was everything that had gone into the lentil before it ever hit the stove.

A combination of the climate, soil, and high altitude of this valley had created these superb little thin skinned jewels. They require no presoaking and after a scant 25 minutes of cooking the resulting lentil is exquisitely tender and delicate in flavor. Each individual pulse retains its own shape and structure, not a floating empty shell in sight. The internal texture lacked mushy graininess and there was a flawless consistency from lentil to lentil that I had never experienced before. This was a lentil I could truly love.

Simplicity of flavors is the striking characteristic of the food here, allowing the high quality of the ingredients to really shine. Since the Middle Ages, Norcia has been famous all over Europe for their pork charcuterie. In the bitter winter months, peasants were encouraged to migrate with their animals to the Roman Campagna. It is here that the butchers of Norcia gained a reputation as swine specialists. So famous were they that the Italian word for pig butchery—norcino—is derived from Norcia. Today, much of this tradition is still in practice. Just outside of town, Sante Coccia’s daughter Illaria is continuing her family’s business by producing some of the best cured pork found anywhere in the world. Their pigs, the black-banded pigs of Norcia, are allowed to roam free as much as possible with minimal human interference in their daily lives. The breed, with a distinctive tan band around their upper torso, are so ancient that they often appear in medieval frescos, sitting next to Saint Anthony, the patron saint of animals.

The herbs used in the making of their prosciutto, sausages, and salumi are grown in a little garden patch right on the farm. Umbrian red wine is used in the initial phase of prosciutto curing. It is then hand salted with a mixture of salt and spices, with a particular love for black peppercorn creating the distinctive Umbrian flavor stamp. The meat is allowed to cure no less than 18 months, a slow process that many modern butchers skip over. This patience results in a supple texture with fat that actually sparkles as it melts under the heat of sunlight. While the hard work and time put into the meat produces a magnificent finished product, easily comparable to its more famous Spanish and Northern Italian cousins, this is definitely not the sort of job that fortunes are built upon. Rather, this is the kind of business that only springs out of true passion and love.

In the immediate aftermath of the earthquake, much has been written about the impact on the region, but little on its recovery. While the devastation can’t be overstated, most of the medieval hilltop towns dotting the region still stand strong, stubbornly clinging to their medieval foundations. In addition to Norcia and Castelluccio, I visited the magnificent churches of Assisi and toured the ancient Etruscan tunnels of Orvieto. Everyone that I spoke to lamented that the media coverage of the earthquake had created a dramatic drop in tourism to the area, which in turn made it even harder for the recovery and rebuilding. This is the time to visit Umbria. The people here are steadfast in the preservation of their agricultural tradition and are more excited than ever to share it with the rest of the world.