How the Sausage Gets Made 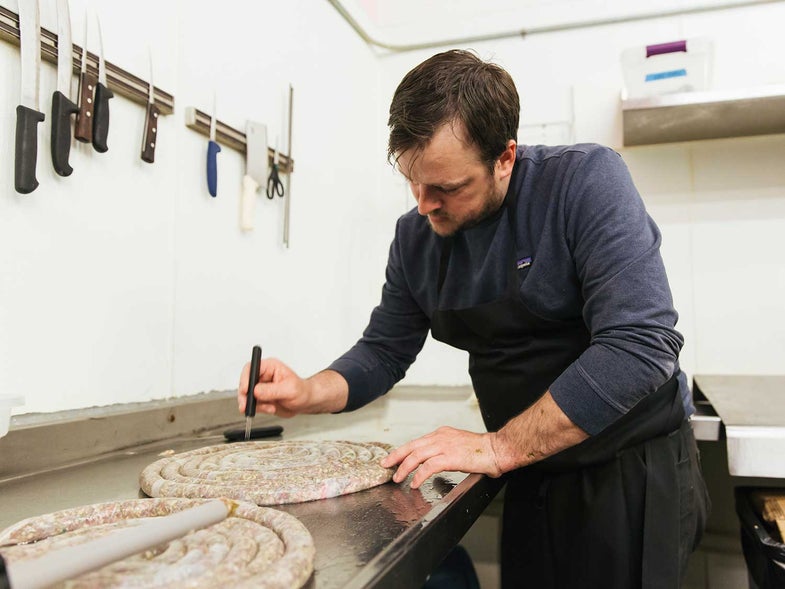 I arrived at Forequarter, one of trendy downtown Madison’s most hyped restaurants, a little early. I settled into a table towards the end of the bar, beneath a snarling taxidermied bear, and ordered enough charcuterie for 6 as I waited for the chef, Jonny Hunter, to join me. As the clock creeped past our rendez-vous time, I ordered a cocktail. Then wine, half the dinner menu, and a sticky toffee pudding, rich with molasses and gingerbread spice and glazed with sugary lacquer. As the server cleared the table, a disheveled blond man barreled through the entrance, over an hour late to our meeting. Removing his rain-soaked cycling cap, he beelined to the table. “Hey,” he said, brusquely shaking hands and settling in, “I’m Jonny.”

While I had waited for him to join me that evening, Hunter had been back home, waiting for his partner, Sara Cohen Christopherson, to return from work so that he could hand off their two young children. Starting a business in an expensive coastal city is a daunting prospect, and food businesses are particularly risky. Astronomically high rents and a web of complicated licensing and zoning laws make it difficult for independently-owned businesses to operate out of prime real estate in places like Boston, San Francisco, or New York. In these larger cities, the contemporary restaurant scene is increasingly dominated by big restaurant groups and partnerships with hotels and luxury housing developments. Small, locally-owned food businesses end up splintered between multiple partners and investors, or setting up shop in quieter, more residential neighborhoods.

But maybe the rules are different in the Midwest. One could easily believe that Forequarter and Underground Butcher, the two public outposts of Hunter’s Underground Food Collective, were plucked out of Brooklyn and dropped in southern Wisconsin, but when I learned that the rest of the Collective was in the process of outgrowing its nearby commissary location and expanding its catering operation and charcuterie plant into a massive new 7000 square foot space, I was stunned. It’s hard to imagine any chef’s empire diversifying so broadly without TV fame and several decades of experience.

For someone with 4 James Beard Award nominations and multiple food businesses under his belt, though, 38-year old Hunter is one of the least “establishment” chefs I’ve met. He’s chosen a special place to lay down roots, and the Texas transplant doesn’t mince words about his background. “I was raised in a cult,” he shrugs, in describing the conservative, religious upbringing he left behind when he settled in Wisconsin’s left-leaning capital city. As he told me about the Collective and their multiple projects over the last sips of wine, Hunter described himself as “a little bit of an anarchist,” but his track record suggests a reformer rather than a revolutionary.

Calling his organization a “collective” isn’t just branding: It got its start in the late 90s, when Hunter was an undergrad at UW Madison. He, his brother Ben, and some friends starting out selling inexpensive vegetarian meals out of a café in a campus church basement (hence the name “Underground”). The Collective began hosting pop-up dinners and taking on catering projects. The team started butchering in-house and making their own charcuterie, traditional practices that lower food cost and minimize waste, which also allowed them to exercise more control over their ingredients. Shortly thereafter, they were awarded a grant from the U.S. Department of Agriculture that allowed them to build a proper meat processing facility; the grant marked the birth of Underground Meats, and it was no small feat for a team of chefs with no formal culinary training or previous meatpacking experience.

In 2010, as Hunter was also working towards a master’s in public policy, he and Ben brought on current co-owner, Mel Trudeau, to help open their flagship restaurant, Underground Kitchen. The restaurant was a hit, and when a fire ripped through its kitchen a year later, the Madison food community rallied to help the Collective regroup. By 2012, the team had opened both Forequarter and Underground Butcher.

The kitchen crew at Forequarter operates outside of the old fine dining hierarchy; Trudeau oversees the service side of the Collective, spending most of her time at the restaurant, while three co-chefs design a rotating menu based around the market season and their own tastes and interests.

In addition to running the Underground Food Collective with Trudeau, Hunter is involved in fundraising efforts for progressive causes and in organizations aimed at supporting the local food community. He serves on the chef leadership committee for Madison Area Chef’s Network (MACN), a consortium of chefs that works to connect local producers and farmers with chefs. Madison locals insist that their hometown is as invested in their vibrant farm-to-table food culture as Californians—a claim that may seem exaggerated until you learn that the year-round Dane Country Farmer’s Market is the largest producer-only farmers market in America. Hunter nurtures a particularly strong relationship with the Collective’s producers, sourcing directly from nearby meat and vegetable farmers, cheesemakers, and brewers.

He also sources foraged ingredients for the group’s food and beverage programs, so he enthusiastically tagged along with me the following morning when I met up with members of the Wisconsin Mycological Society in search of the last morels of the season. After loading the car up with our haul, Hunter took the group back to his commissary for a lesson in morel sausage-making and a private tour of the facility. When I asked about a rich and pungent pork belly blood sausage with barley-koji beer mustard that I had enjoyed with dinner, Hunter deflected the credit to Evan Dexter, the co-chef who had developed the dish.

Members of the Wisconsin Mycological Society brought us to an undisclosed local park to hunt for the last morels of the season. Matt Taylor-Gross

He was more interested in discussing his solutions to the persistent restaurant food waste puzzle, such as his suite of ongoing fermentation projects. The chef’s low-key demeanor gave way to giddiness as he showed us a warm proof box full of funky, cryovaced protein trimmings, slowly dissolving into salty, cultured sludge: some of it is batches of classic fish sauce, and a few experimental brews using beef, pork, and fowl. He handed out spoons so we could sample miso pastes made from nontraditional legumes and grains, then opened walk-in after walk-in, hung wall-to-wall with curing hams and salami.

After the tour, the chef casually cleaned our morel haul, then rooted around in the fridge for a few last-of-the-season ramps and a handful of tender green spruce tips. He cut a deep red hunk of pork shoulder and a slab of fatback to pieces, then mixed the meat with the foraged goodies and seasonings before grinding it to a loose farce. He then extruded the sausage into links while explaining the different styles of raw and cured charcuterie produced at the facility.

Hunter used the foraged mushrooms in a batch of pork sausages with ramps and spruce tips. Matt Taylor-Gross

By now, Hunter has more than enough kitchen chops and business savvy to thrive in a larger city, but, as Wisconsin cheesemaker Andy Hatch points out, “Madison is a great town to for him to use as a base because the open-minded culture and low cost of living make it so easy to incubate new ideas.” While wildly affordable by coastal standards, Madison is one of the most well-educated cities in America and the surrounding Dane County is the 3rd most affluent in the state, making Madison an especially friendly region for innovative and adventurous food businesses like the Collective.

UW Madison—famous for its agriculture programs—is a huge draw for innovators in the food world and Hunter is perfectly poised as a local matchmaker and catalyst for culinary innovation. Hatch, who shared a house with the young chef when they both studied at the University, describes him as “a connector of people and ideas that don’t normally find each other. Jonny brings together all sorts of interesting people to meet, talk, collaborate, cross-pollinate.” After the last presidential election, Hunter approached Laila Borokhim of Layla’s Labor Temple Lounge and Noosh with an idea for a bake sale to benefit Planned Parenthood. Borokhim enthusiastically signed on and the two chefs worked together, recruiting a group of 19 other local restaurants, and the project pulled in a whopping $25,000 for Planned Parenthood of Wisconsin.

Now, Hunter is focused on a Kickstarter campaign aimed at improving the pervasive kitchen labor crisis while having a positive impact on unemployment in Madison’s low income communities of color. In general, the city is a great place to live and it has a relatively low unemployment rate but Hunter acknowledges that, for all of the city’s progressivism, Madison is still struggling with racial tensions and inequalities. In response, he launched a career-training program to provide students with free formal culinary training. He and his co-founders, Matt Feifarek and Chandra Miller Fienen, hope that the program will empower students to pursue careers in kitchens or even to launch their own business.

Madison’s Dane County was one of only 3 in the state to see an increase in Democratic voters since the 2012 election and, in many ways, the capital is a lonely beacon of progressivism in the midst of increasingly conservative suburbs and countryside. The Underground Food Collective’s mission, like its businesses, is obviously multifaceted; Hunter, Trudeau, and their staff are focused on sourcing, making, and serving great food, but they’re also committed to social justice issues. The team is constantly looking for new ways for the Collective to use its successes to leverage social change within and beyond Madison. Trudeau explains that, “ultimately, our legacy as a company is going to be the impact that we have on our community.” When asked if all his social justice projects are leading up to a shift towards politics, Hunter doesn’t turn down the possibility, but demurs, insisting that, for now, “being an entrepreneur allows for me to have the strongest influence on public life; at some point I would like to run for office, but right now I find that I have more influence through being involved on a business side.”

The Collective is a case study for aspiring food entrepreneurs looking to provide an alternative to typical business models, and while Hunter is one of many Madison food professionals working to effect progressive social change, his idealism and collaborative tendencies make him an important face for the future of the state. He nurtures relationships between the city’s food world, marginalized groups, and nearby rural producers and he’s acting as a bridge between parts of the state that are, like much of America, struggling to heal deep divides. If there’s hope for reconciling opposing viewpoints in Wisconsin and beyond, it will be over a good meal with folks like Jonny.