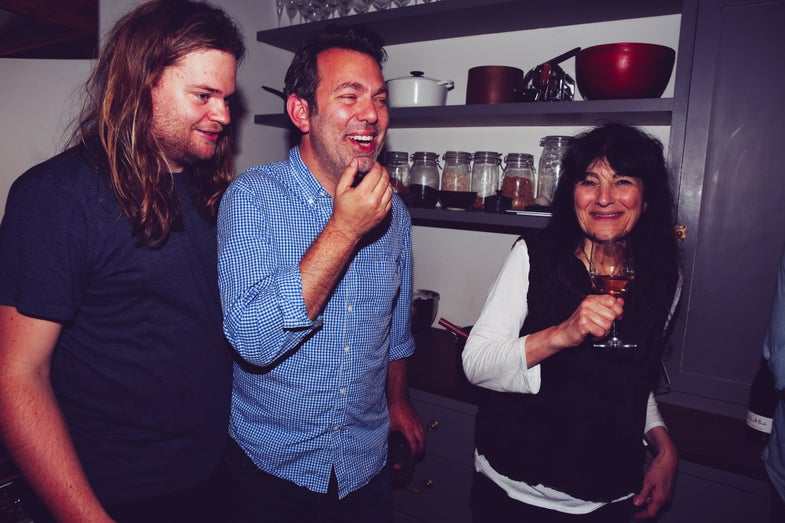 Two kilos of bright orange bleak fish roe peeked over the edges of a white bowl. “I declared it in customs and had a conversation with them,” Magnus Nilsson told me, of the eggs he brought in from Järpen, Sweden for dinner. “I explained what it was. They were happy.” Magnus is in the U.S. for a week, away from his restaurant Fäviken in Sweden, visiting six cities as the host of a series of dinners in collaboration with Dinner Lab reflecting Nordic cuisine in conjunction with the release of his book, The Nordic Cookbook, an encyclopedic yet personal tour of Nordic cooking. At those dinners, Magnus will serve as host while a cadre of American and Scandinavin Nordic experts do the cooking. But last Friday, at our Editor-in-Chief Adam Sachs’ Brooklyn home, the chef (whose restaurant is currently ranked 25 on The World’s 50 Best list) took the reigns in the kitchen. Hence the bleak roe in his carry-on.

As guests arrived, Joel Aronsson, Fäviken’s on again, off again cook, and soon-to-be sous chef, piped spirals of batter into a hot skillet, which would form small golden potato pancakes to catch generous dollops of the roe. “Bleak roe is a very traditional Swedish dish,” Magnus said. “I wouldn’t say common, but it’s a very festive dish.” A number of chefs, writers, and Nordic food obsessives lined up for a taste; New York Times food writer Melissa Clark grabbed a spoon and went in for seconds. But she skipped the pancake, chive, red onion, and sour cream altogether this time and, for a few moments, walked around socializing with an orange fish-egg lollipop.

Fäviken—both the internationally revered 16-seat restaurant and Magnus’ first cookbook—is about daring, high-flying, thought-provoking cooking. So for Magnus, Friday’s dinner was an escape, a chance to showcase Nordic cooking at its most homestyle, approachable, and intimate.

“My goal was to document the current, everyday Nordic food culture,” Magnus says of his 750-page, 700-recipe book, “which meant visiting people that actually cook in their homes on an everyday basis. You need to understand tradition to understand what’s here now.” Through those recipes, Magnus shows how Nordic cuisine is less a single, discrete thing than an archipelago of flavors and influences spanning seven countries with impressive variation.

But no matter the regional style, it’s a form of cooking intimately attuned with nature. Nordic cuisine is less about fish roe and sour cream than working with what you have. Magnus was able to bring in the roe, but he couldn’t ship over an entire Nordic larder. So when a hunk of dry-aged Pat LaFrieda beef hit the kitchen, he simply fired up the grill to cook steaks with hasselback potatoes (“a real Swedish grandma potato garnish”). “A lot of the dishes in everyday food culture, regardless of where you are, are quite simple,” Magnus said. “There’s no point in trying to make something you can’t recreate.”

“It sounds cheesy,” Joel told me, “but working at Fäviken is a lifestyle choice.” He talked about the unique structure of the restaurant—how, because it’s in the middle of nowhere, there is no local restaurant community to distract or influence what goes on there: only nature. And how each cook on a staff of eight (nine with Magnus) is responsible for a single ingredient on the plates that leave Fäviken’s kitchen. “You have eight people standing over a row of plates. When it’s your turn to plate your ingredient, you have nothing to hide behind. If you mess up, there’s no one to blame.”

The action kept up all night in and out of the kitchen. In one corner, early on, bread obsessive Zach Golper cracked open a loaf of bread he made that morning in Brooklyn at his bakery Bien Cuit. He stuck his nose in for a whiff, approved, ripped off a piece, and handed it to Magnus, who in turn ripped it again and stuck his own nose into it. And much later, in another, former Aska chef Fredrik Berselius and Estela partner Thomas Carter airplane-guided a spoonful of dessert into Acme chef Mads Refslund’s mouth.

That dessert was also all about simplicity: waffles topped with macerated raspberries. The raspberries, “not cooked, just stirred with a bit of sugar,” were the easy part. But the batter took some rejiggering. The waffle batter was supposed to be the same one Magnus used for the pancakes earlier in the evening, but he announced, “We’re redoing the batter. The first batter was measured with cups, and cups is the most stupid measuring system invented by man. Now we’re doing grams, which is going to work. Hopefully.”