The Final Ingredient to This Mexican Soup? A Hot Rock to Cook It 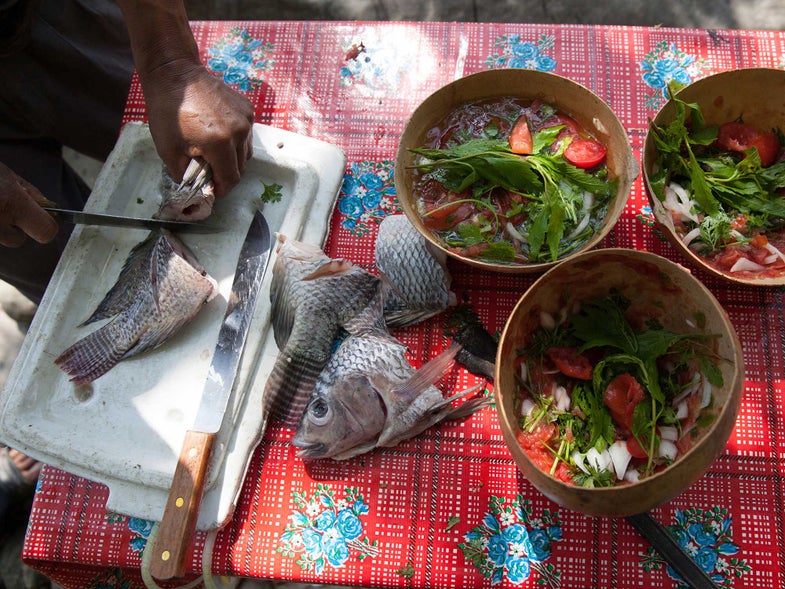 Deep in the northern reaches of rural Oaxaca, Don Julio Isidro, 69, emerges, grinning, from a stand of trees on the banks of the Usila River. In one hand he holds a machete; in the other, a slender tree branch, quickly cleaved to form a kind of oversized tongs. He hands the giant tongs to Don Victor Santiago, another of the village elders, and they exchange a few words in Chinanteco, one of Mexico’s few remaining indigenous languages.

Don Victor is tending a raging fire of orangewood planks, which conceal a few dozen carefully selected river stones inside it. Balanced on the rocky shore next to the fire are several jicara, or large gourds, each filled with aromatic vegetables, herbs, cold water, and half a mojarra, a tilapia-like freshwater fish. Soon Don Victor will use the tree-branch tongs to move the glowing-hot stones from the fire into the gourds. Their blazing heat will transform the assorted ingredients into an ancestral dish called caldo de piedra (literally: stone soup): broth cooked not over a fire, but by a hot stone.

Said to predate the arrival of the conquistadors, caldo de piedra is now famous enough to be found on the menu in white-tablecloth restaurants like Mexico City’s El Lago and Casa Crespo in Oaxaca. But its roots are here, in the tiny Chinantec town of San Felipe Usila, where it remains a fundamental part of life despite the fact that the world around it has changed.

“Usila has all the riches that God gives us, and the people of Usila use everything,” Don Julio says, explaining that all the soup’s ingredients used to be found right here by the river. Some men (until recently, the soup was prepared exclusively by men) would select the stones from the river while others gathered firewood and fished for shrimp and mojarra. Cooks would collect tomatoes, onions, chiles, garlic and herbs from nearby gardens, and not far from where I sit on the riverbank I can see the jicara tree, the bright-green gourds that get turned into bowls hanging heavy from its branches like oversized Christmas ornaments.

Today it’s different: A dam built 20 years ago decimated the local mojarra supply, so Usileños now have to drive to the next town to buy fish. Families lug five-gallon bottles of purified water to the shore, fearing that the river water is no longer clean enough to cook with. And instead of using a rock to crush the garlic and tomatoes, some cooks now use graters or even electric blenders to get the job done. But caldo de piedra still plays an essential role in family get-togethers, especially during Semana Santa (Holy Week), when the riverbank is crowded with clusters of people each preparing their version of the dish.

After a half-hour in the fire, the rocks are ready to be dropped into the gourds, one for each member of our party of assorted family, neighbors and guests. Don Victor uses the tongs to gently guide the first rock into the first jicara. Right away, the broth starts spitting and frothing against the white-hot stone, sending the heady aroma of garlic, cilantro and chiles wafting down the river.

Each gourd swallows three or four stones before the soup is ready to eat, and the spent stones are removed before serving. From the first slurp, the soup is intoxicatingly good: spicy, smoky, savory and tinged with mineral notes from the rocks. We eat hunched over our gourds, squatting on the shore. I take a seat on a boulder near Lalo Lozano, an Usileño a generation younger than the elders who starts waxing poetic about the importance of the dish to Chinantec culture.