SAVEUR's Kat Craddock sits down with Francisco Migoya and Nathan Myhrvold to talk bread, science, and the pursuit of perfection 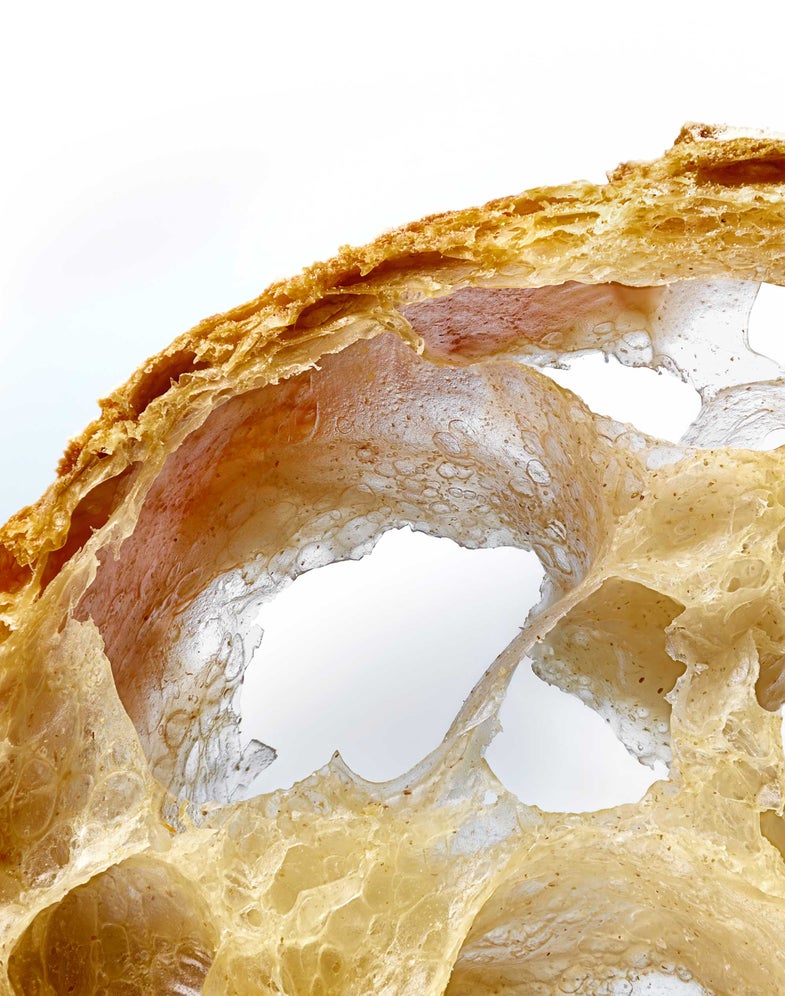 When former Microsoft CTO-turned-author Nathan Myhrvold and his team released Modernist Cuisine six years ago, there had never been a book—or, more specifically, a volume of books—that so thoroughly unpacked contemporary food science. While Modernist Cuisine might have seemed like a once in a lifetime contribution to the world, Myhrvold actually wasn’t finished. He joined forces with baking and pastry visionary, chef Francisco Migoya, for a second series, Modernist Bread. The five-volume, 2,642-page collection, which went on sale this fall, may be Myhrvold and The Cooking Lab‘s most ambitious project yet.

A trained bread baker myself, I was curious to learn how The Cooking Lab would approach the highly intuitive craft and science of bread baking. I hopped on the phone with both Myhrvold and Migoya for separate interviews about recipe testing for the books, food styling magic, and their favorite tricks for hacking a home kitchen to bake like the pros. Our conversations are edited and condensed below.

Nathan, you were a home baker long before you started working in the food science world. And Francisco, you’ve taught and written for professionals for years. Who is your intended audience?
Francisco: We focused on three different types of readers: professional bakers, home bakers, and a combination of hotel and restaurant bakers.

Home bakers and professional bakers approach recipes so differently. How did you make the books friendly to such a wide range of people?
Francisco: The books provide instructions that align with whatever your environment is. The advice doesn’t all fit within the recipes; we see the recipes as portals to the rest of the book. If you’re comfortable with baking, you don’t have to flip back and forth to all of the pages that we cross reference—you probably will only need to look at the recipe. But if you’re a home baker and you need a little more help, you can go to these other pages and take a look at what it is that you have to do.

You probably tested these recipes a zillion times. Could you walk us through that basic process? Nathan: We started by entering every bread recipe from almost 400 bread books into a database. I think we’ve got 120 baguette recipes in there. Once we got them all on the computer, we could compare them and say, “Okay, what are the differences between these?”

Then we would try to develop what we thought was our ideal approach. We’d ask, “Okay, what could we make better about this?” Or, “Can we make it almost or exactly as good with a simpler recipe?”

Francisco: Every one of our 1,200 recipes was tested in every type of mixer you can imagine. Then we tested proofing [fermenting and rising] that dough in different environments: using a proofer or retarder [to keep the bread dough at a relatively consistent temperature and humidity level] like a pro baker has, proofing at room temperature, and cold proofing down to 39°, a temperature like you’d find in a fridge.

After that, we baked in five different ovens: convection, combi, deck, wood-fired, and home ovens. We did that three times for each dough. We were trying to make the recipes as bulletproof as possible.

Nathan: We came up with a variety of ways to make a home oven approximate a professional oven. It’s never going to be perfect. If you want to make large quantities of really crusty bread, you need a deck oven with steam injection.

For years, people have done things like spray water into their oven, but what we found works best is a cheap black cast iron pot. The fancy-pants enameled ones don’t work as well. Black is the least expensive color and it helps absorb heat from the oven and radiates that heat inside.

A lot of recipes suggest that you preheat the pot, but if you do, you either wind up burning your fingers or you plop the bread in and then it doesn’t look so good. We found that a cold pot will work pretty damn well. There is a pan that Lodge makes called a combination cooker— basically a cast iron pot, but the lid is a skillet—which you can turn upside down. That’s way easier to load into.

What other home hacks were you excited to discover?
Francisco: We have a hack for proofing at home that is really cool. You can take a cooler, any cooler that you’d go camping with. Inside, you put a bit of water, a fish tank heater immersed in the water, and a wire rack on top of that. You put your dough that’s already been shaped in a basket on top of the rack, set the heater to 80–85°, and close the cooler. You’re creating a warm, moist environment that the dough is going to be very happy in.

Nathan: There are bread doughs that have a lot of water. Ciabatta is a good example – it will typically have 85–90% water by baker’s percentages. When you make a bread like that, it’s kind of this quivering blob, thicker than a batter, but not really a dough. It’s hard to shape, it sticks to your fingers and board. So we said, “What are some ways that we can make a high hydration bread easily?”

Francisco: We added 7% of the weight of the water in gelatin, melted that into the water, and mixed it into the dough at around 80°. At room temperature, the dough is normal, but if you refrigerate it, it is so much more manageable. All you’re doing is manipulating the state of the water and taking advantage of its physical properties. Once it bakes, the gelatin melts out.

In the book, there is an amazing cross section photo of perfectly proofed dough in a banneton (proofing basket). How did you cut into that without deflating it?
Francisco: First, we had our machine shop cut the banneton in half using water jet cutters. We glued a transparent acrylic onto the banneton half. Then we sprayed it with this liquid called Rain-X that you spray on your windshield so that when it rains, the drops don’t stick. We took a boule of basic French lean dough, cut it in half very cleanly, and put it inside the basket with the cut side facing the acrylic. The Rain-X kept it from sticking to the glass so that it could expand and proof up vertically without getting stuck on the glass.

Very cool.
Francisco: Even cooler than that is that we did a timelapse of it. There’s a gif. It lasts like five seconds. You can see the whole process, from just going into the basket until it’s over-proofed.

I hear a lot of conflicting opinions about aged flour versus freshly ground. Traditional baking wisdom dictates that aged flour is best for baking, but new school artisan bakers like Chad Robertson prefer to work with flour that has just been milled. Did you do any comparative testing on that subject? Francisco: We did. We milled a bunch of wheat and then we made a dough with that wheat the day it was milled, the second day, third, fourth, fifth, sixth, seventh day. Then, we waited another week and then a total of three weeks.

We utilized a machine called a Mixolab; it groups different kinds of flour measuring equipment into one machine. We also used a texture analyzer to determine the results of the baked bread.

It turns out that everybody’s right. Freshly milled flour will make very good bread for the first two or three days after milling. But then after that, it starts to decline in quality, meaning you don’t get very good absorption or volume and it doesn’t produce the same quality bread. But then after it’s aged for about three weeks, it starts to become good again. It oxidizes and becomes more bread-friendly. Not everybody can mill their own fresh flour. If you can, awesome, but if you can’t, that’s fine too.

Nathan, when writing about resiliency and repeatability, you explain that “for truly repeatable results, bakers would have to execute each step under the same working conditions every single time they made bread.” You point to Intel’s “copy exactly” philosophy, in which factories that make Intel computer chips are exact replicas of each other, down to the brand of paper towels in the rest rooms. How did you translate recipes developed in your strictly recorded, controlled environment into ones that will work under less precise conditions?
Nathan: Yeast is a growing thing that is very temperature dependent. If you increase the temperature by 10 degrees, it’s going to go radically faster. When people complain that their bread doesn’t turn out, it’s usually related to temperature.

You’ve also got to use some judgment in deciding when your bread is ready to go in the oven. Most home recipes instruct you to wait until it’s doubled in size, and that’s really hard to determine. We go more for times and temperatures.

It’s also important to give an idea of what to look for if something goes wrong. A lot of recipes are like me giving you directions to drive to my house; I say, “Turn here, turn here, turn here.” That’s great if you follow it all perfectly, but if you miss one of those turns, you’re kind of screwed. It’s a lot better to have directions that say, “Now, if you see X, you’ve gone too far.” So we developed a technique called “Dough CPR”, so if you overproof your bread, we have a fix.

I think it’s important to empower people. Bread is forgiving; I wouldn’t not make it just because environmental conditions will change. I would make the bread.