Toward a Theory of Perfect Nachos

Universally adaptable, proudly inauthentic, an anything-goes dumping ground of melted cheese and chips—could this be the origin story of nachos? 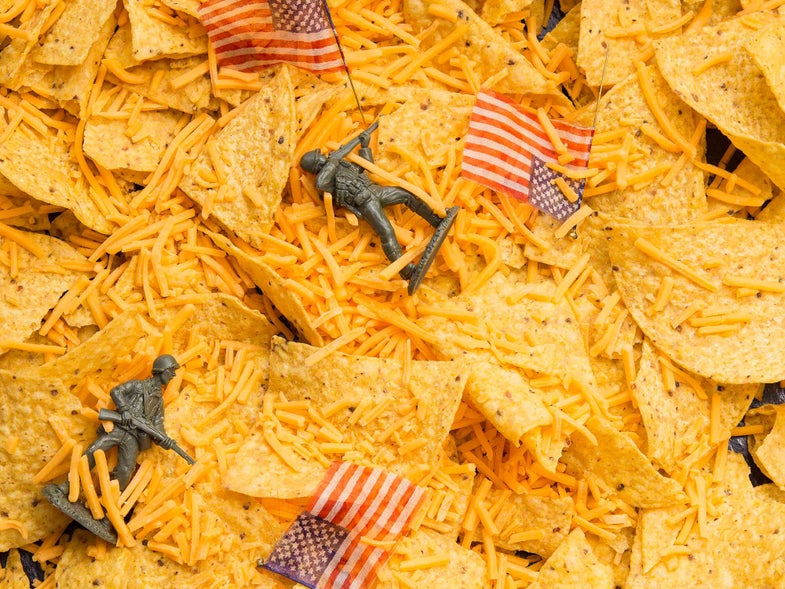 One night in Mexico in 1943, at the Victory Club restaurant in Piedras Negras, some U.S. Army wives showed up hungry. Unfortunately, the kitchen had closed. The women were visiting from Eagle Pass, Texas, a few miles across the border, and though the story’s not clear on why exactly they were in town—some accounts say they were shopping; others say they were there to get drunk on chicos, blackberry tequila cocktails that were trendy at the time—what is known is that the maître d’ that night was fast on his feet, nimble enough to run into the kitchen and throw together a snack: fried tortilla pieces topped with melted cheese and cold, pickled slices of jalapeño.

The man’s name was Ignacio Anaya. His nickname was Nacho. When the ladies asked what the dish was called—presumably because they liked it, why else inquire?—Ignacio replied, “Nacho’s especiales.”

Many years later, a bronze plaque honoring Anaya was placed in town, and the dish named for him is enjoyed worldwide. I’ve eaten them in at least half of our 50 states, never mind in France, South Africa, and a small ski resort town in northern Japan. People are frequently surprised when I tell them how nachos began. Some expect a quaint peasant narrative from deep in Mexico. Others can’t believe “cheese on chips” warrants a birth certificate in the first place. A Mexican improvisation for American palates—as an origin story, it’s pretty much the definition of Tex-Mex, or should I say Mex-Tex? In any case, nachos were born, and they’ve been mutating ever since.

Nachos are my favorite meal. I’ve eaten them for as long as I can remember eating. In the week and a half it took me to write this story, I ate them three times. If nachos are on a menu, I order them. The fact is that between a great plate of nachos and anything else, I’m not much interested in the anything else.

Go for thick-cut chips that won’t break under the weight of toppings. Matt Taylor-Gross

I credit my parents. We didn’t eat much in restaurants growing up, but if my sister or I got a good report card, the family went out, and the student got to pick the destination. I liked Benny’s. It was a dive bar near the train station where my dad caught the express each morning, commuting to New York City from Connecticut. The bar was reliably good for depressing lighting and aggressive substance abuse. And until my last visit—Benny’s closed a few years ago—the nachos were prime.

But Anaya’s recipe is considered traditional, sacrosanct, perhaps blue-blooded in its austerity: shards of fried and salted corn tortilla, melted Wisconsin cheeses, jalapeños. Typical modern variants include condiments like pico de gallo and sour cream, not to mention those trays of chips with warm Cheez Whiz in bowling alleys. “Gourmet” nachos can be found bearing hollandaise sauce. When home cooks photograph their “dessert nachos” for social media, are nachos even a dish anymore, or are they a formula—i.e., stuff with other stuff piled on top? Formulas have a way of inviting deviation. One night last week I ate out in Murrells Inlet, South Carolina, and on the menu of this seafood joint were “nachos” made from wonton crisps, topped with ahi tuna. (I didn’t order them.)

If nachos aspire to be anything, it may be the sandwich, minus its dignity. After all, you can’t have a sandwich without at least a slice of bread, just as nachos without chips would be…a mess. Sandwiches deserve their prestige. The category rests on its canon. Classics like the tuna melt, the PB&J, the jambon-beurre. For the nacho, several well-known iterations do appear consistently. For example, the real deal, Ignacio-style, my favorite, with single chips individually treated, prevalent in Texas and better restaurants nationwide (including Chili’s, incidentally). What I call “The Molten Pile” is better known, ubiquitous in college towns, ski towns, every town, and more likely to be bad than good. Sometimes it’s downright gross: scoops of sour cream that smother, chips turned gluey from too much cheese. I’ve developed survival tactics for lands unknown—I request all condiments on the side and no lettuce, no olives. Still, more than once I’ve sent back a plate for being cold and submerged in salsa. The truth is, for many people, line cooks included, nachos are garbage food, populist calories for drunks; they just don’t deserve care.

Maybe that’s because when people think of nachos, they think of ballpark-style nachos, those that are found at stadiums, amusement parks, and movie theaters. Some of the origin facts are up for dispute, but what seems established is that in the mid 1970s, at Arlington Stadium in Texas, people figured out that chips plus cheese and jalapeño slices were a perfect match for watching baseball—and for selling more beverages. Instant success. That season, the stadium moved nachos at the rate of one sale per every two and a half patrons. Popcorn, the previous best seller, was outsold by a rate of nearly 10 to one. A few years later, in 1978, when announcer Howard Cosell was calling games for Monday Night Football, someone brought him a plate of nachos in the broadcast booth. Cosell loved the dish so much, he started using nachos as a word to describe plays. “Did you see that run? That was a nacho run!” Suddenly nachos were part of the American lexicon.

When I travel outside the United States, I struggle at times, when pressed at dinner parties, to define our cuisine. The nation of France doubts we have one. Italians think we stole theirs. Look at India, China, Thailand, with their endless plates of subtle flavors—and look at us: We invented the hamburger. Americans are good at eating, not cooking, people tell me. Still, I can usually make a case for nachos, at least as a pleasing snack. The multitude of flavors and textures: savory, crunchy, spicy, sweet. Bitter from the squeezed lime. Sour from the pickled peppers. Nachos aren’t subtle, but they’re also not fussy. They’re multicultural, but in no way elite. All those contrasting flavors, and yet there’s an inescapable stress on gratification: as American as apple pie, in that way, or General Tso’s chicken.

Americans tend to Americanize. Put a sausage in a roll, it’s a hot dog, end of story. In the case of nachos, though, thanks to Anaya and those Army wives, the dish was created for the American palate from the start. But that wasn’t good enough. Like with everything else we say we value as a nation—internal combustion engines, human rights—we tinker endlessly. Sushi nachos. Christmas nachos. Chips with cinnamon and sugar, topped with caramel sauce. But evolution doesn’t always mean progress. Natural selection includes fits and starts. In the case of nachos, I want to celebrate the original, a snack actually born out of necessity. Homemade chips. Real cheese. Briny, spicy jalapeño slices. As a culinary formula, it’s as perfectly coherent as a BLT, a Coca-Cola. And it doesn’t require a ladle. I can’t stop the future, so I celebrate the past. Nachos may be a humble snack, but their start was profound. 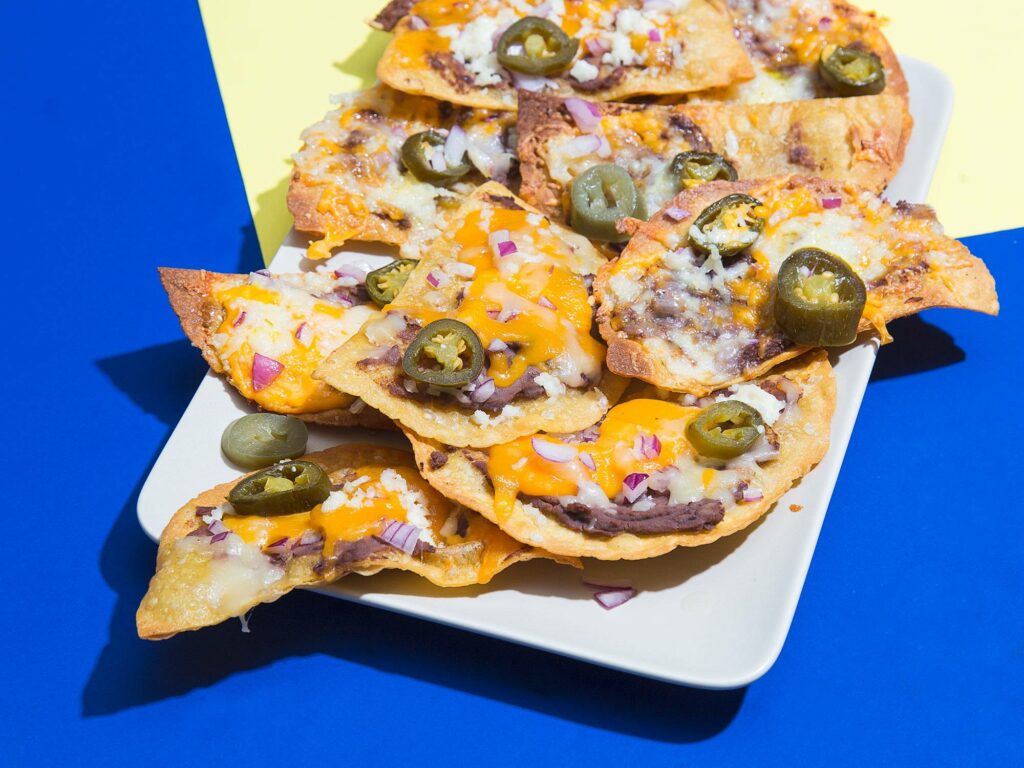