These beachside specialties of the ocean state are virtually unknown elsewhere; here's how to bring them home 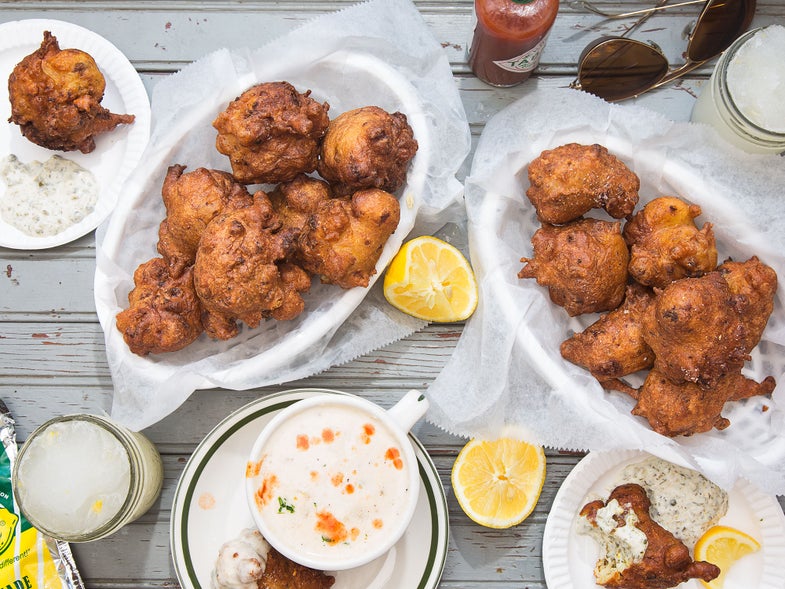 Anyone who has grown up around (or vacationed in) Rhode Island has some memory of clamcakes. Eaten out of a greasy bag on the beach, off long communal tables in one of the state’s gone-but-not-forgotten amusement parks, or dunked into clam chowder from any clam shack or harborside fish market-cum-restaurant, these little fritters are as essential to Rhode Island summer as cider doughnuts are to fall in New England. But unlike those doughnuts or local Rhode Island clam chowder, clamcakes are practically unknown everywhere else, even as nearby as Massachusetts and Long Island.

Clamcakes’ similarity to crab cakes ends with the name; they are heavier in the “cake” department, more fritters or hush puppies than seafood patties. They’re mildly seasoned, perhaps with a bit of garlic, black pepper, or paprika. They may contain a touch of cornmeal, but typically are made with an all white flour batter. Some are chewy and soft, like savory funnel cake, while others are crisp on the outside and fluffy within. Most importantly, they are generously filled with minced fresh clams. The most reverent of recipes call for whole-belly quahogs and clam liquor, ingredients that perfume the hot-out-of-the-fryer dough with rich, briny steam.

The fritters range in size from marbles all the way to tennis balls, and David Norton Stone, Rhode Island food historian and author of Clamcake Summer: One Man Eats Every Clamcake in Rhode Island (Or Dies Frying), suggests a relationship between clamcakes’ size and their geography. Stone observes that the southernmost clamcakes, like those from Aunt Carrie’s or George’s of Galilee (iconic clamshacks on the southern tip of Narraganset), are typically the largest.

Older Rhode Islanders remember enjoying more petite clam cakes sold 30 miles to the north at Warwick’s Rocky Point Amusement Park. The historic attraction drew crowds with its rides, sideshow, performances, and food from 1847 until permanently closing its gates 1995. David Cascioli, the general manager of Rocky Point from 1974 to 1994, recalls serving nearly 1,700 orders of clamcakes—roughly 23,000!—in an average day of service. The park’s Shore Dinner Hall offered the cakes as a part of a traditional New England shore dinner and sold them by the bag from a takeout window.

The coastal property has since been turned into a scenic state park, but Cascioli now works as a consultant for the Rocky Point Clam Shack, a nostalgic culinary relic to the legendary amusement park that allows younger generations of Rhode Islanders a taste of the Shore Dinner Hall’s famous fritters and chowder.

Aunt Carrie’s officially claims that its founders, Carrie and Ulysses Cooper, were the inventors of the clam fritter. While this provenance is questionable–Aunt Carrie’s opened in 1920, and there are multiple references to clamcakes in 19th century food writing—the Cooper’s contribution to New England cuisine is irrefutable. Stone suggests that “what Carrie really invented was the clam shack itself, a place where clamcakes and chowder became a meal all alone.”

Today, few Rhode Island beach-goers can imagine a summer lunch besides chowder and clamcakes. Aunt Carrie’s received national recognition for this contribution in 2007 when it was named an American Classic by the James Beard foundation. The Rhode Island clamcake may not be as well known as Louisiana gumbo or Carolina barbecue, but it’s every bit as part of our national culinary fabric—one that warrants, at the very least, a trip back east for the summer.

Here’s how to make them as good as what you’ll find at the clam shacks of Rhode Island.

Notes From the Test Kitchen: How to Make the Perfect Clamcake

The Clams: Strained canned clams work in a pinch, but fresh quahogs make the absolute best clamcakes. The large bay clams’ fat, livery bellies nearly melt into the batter, enriching the cakes with loads of briney flavor. (Reserve the broth you get from steaming them for clam chowder.) And don’t be shy when chopping these babies up; the chewy muscles can tend towards toughness when left in pieces larger than a pea. The smaller the clam pieces, the more clammy flavor the cakes will pick up.

The Batter: A splash of mild beer in the batter keeps these cakes light and fluffy, but it is by no means necessary or strictly traditional; if you prefer to cook without alcohol, substitute the volume of beer with equal parts milk and clam broth. A touch of garlic, lemon zest, or paprika are pleasant additions to the batter as well, but don’t go overboard and overpower the clams!

The Fry: If you’re concerned about dropping fat dollops of batter into a big pot of hot frying oil, a 2-tablespoon ice cream scoop with a release-lever is a handy solution. Otherwise, try our easy home-method using two spoons: Use one spoon to scoop a generous lump (about two tablespoons) of batter. Hold the spoon close to the oil to prevent splashing and use the second spoon to scrape the batter gently into the oil. Allow the batter to set up slightly (about 10 seconds) before adding the next clamcake. And don’t crowd the pot—give them room to swim.

Get the recipe for Rhode Island Clamcakes »