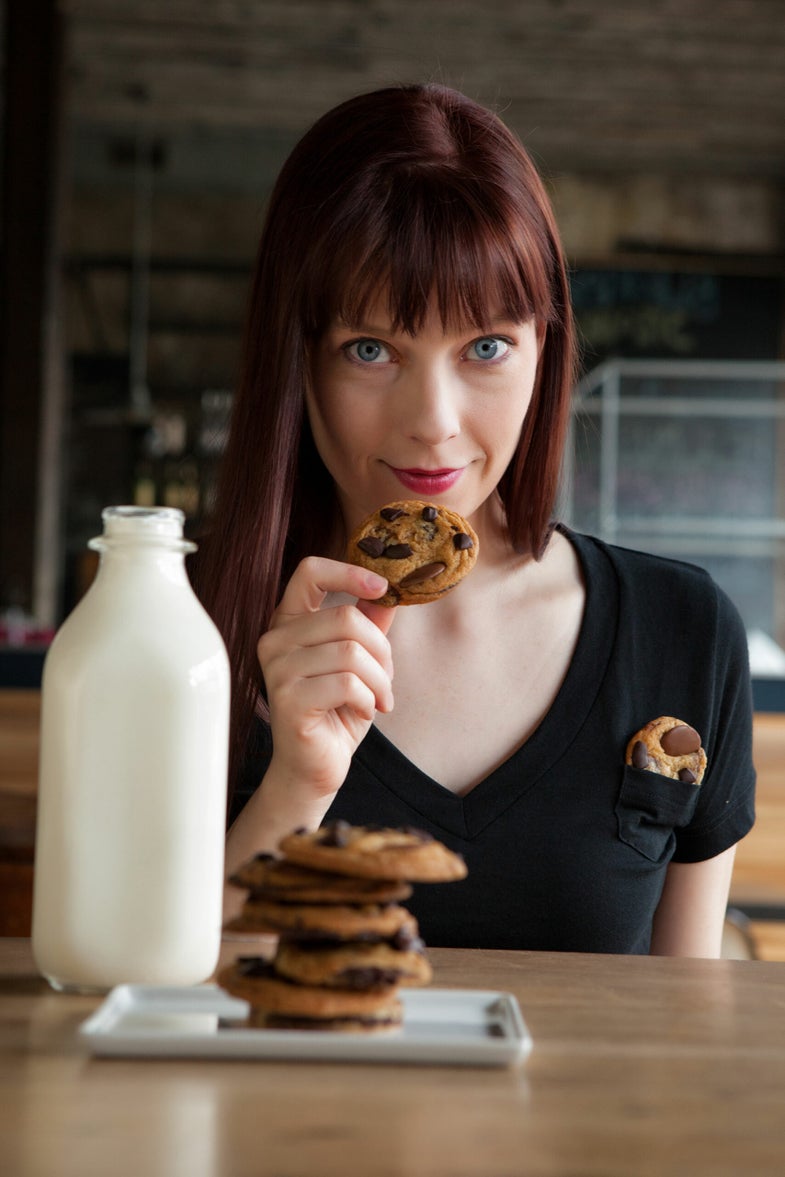 Each month, our Cookbook Club digs deep into a cookbook and shares our progress online. This month, we’re all about Bravetart: Iconic American Desserts by Stella Parks. Cook along with us and share your results—and questions—with #saveurcookbookclub. And if you have questions for Stella, send them to webmaster@saveur.com with the subject ‘Cookbook Club’ and we’ll ask her to answer them in an exclusive feature later this month.

What is American dessert? That’s the question at the core of Bravetart, Stella Parks’ new volume of meticulously tested recipes set alongside antique advertising memorabilia and loads of in-depth anthropological essays on the nature and origins of North America’s pastry heritage.

I’ll be cooking my way through her book this month, but to get started, I hopped on the phone with Serious Eats’ resident Pastry Wizard to pick her brain about the technological achievements and marketing genius that brought so many of our favorite packaged desserts into the world, and the simple pleasures of homemade sweetened condensed milk.

One of the most striking themes in your book is how many of America’s iconic desserts were more or less born out of marketing gimmicks. Like oatmeal raisin cookies. We think of them as such a stodgy, church bake sale food, but you describe them as this trendy technological innovation.
It cracked me up—it’s so hard to imagine oatmeal being trendy that way. There was a time when the Quaker Oats company sent out little sample packs to people. These days we take that for granted—you get something in the mail, you don’t pay attention to it, you throw it away—but in the time it was happening, think how innovative and exciting that must have been.

It’s hard to imagine, especially after working in professional kitchens for a long time. I worked as a pastry chef too, and at culinary school I was trained to make all of these classic desserts that were born in royal or aristocratic kitchens and then trickled down to the masses as they became more fashionable.
To me, this is the biggest divide between European and American desserts. Sweets in Europe often do better with specialized equipment and ovens and the like. But American desserts are designed for the lowest common denominator: to be cooked in “every man’s” household, so to speak. It even changes the way a recipe is written.

Let’s talk about what that marketing competition looks like. Your book has a great section on Oreos, and how they were conceived as sort of a knock-off Hydrox, the original chocolate sandwich cookie. How did that competition play out?
It was almost more aggressive on the part of Hydrox, because they were really on the defensive, while Nabisco seemed to be really playing it cool throughout. There’s no real evidence that anyone at Nabisco was ever sweating this. They seemed to have handled it so casually.

That’s the other kind of bias to this research: The only things I have access to are public documents. So we don’t necessarily get the personal or the private sides of it; you just see what is it they put out into the world.

By all indication, Nabisco’s messaging focused on the Oreo as a delicious cookie, and focused on the happiness and all the things that make it great. Then on the Loose-Wiles side and the Sunshine side, the advertisements were always so defensive. “Accept no substitutions!” and “always imitated!” That kind of thing.

It’s a weird grudge, and with the average person not knowing that story behind it all, I don’t think it was a winning strategy. There’s this one ad that I really wanted to use. It was literally a teddy bear who was crying. He’s talking about how his cookies were stolen, and it’s so clearly a metaphor for, “You wouldn’t steal cookies would you? Neither would we, we’re the original.” It’s like, this is so depressing, you guys. This is a terrible angle. It’s no wonder that Hydrox wasn’t able to stand the test of time, but also pretty tragic.

Your homemade Oreo recipe doesn’t use black cocoa, but you still get that iconic dark hue to your cookies. How did you tweak the recipe to get it where you wanted?
Something I’ve learned in baking is how people are obsessed with the color of a baked good before it bakes. I see people trying to make a strawberry cake or something like that, and they’re all stressed out that their batter isn’t pink enough. But it doesn’t need to be pink in the pan! The chemical reactions haven’t happened yet. As long as it’s pink after baking, that’s all that matters.

With the Oreos, I’ve never had a black cocoa that really satisfied me. It’s just so, so alkalized to get that color, but it’s unbelievably bitter, and not chocolatey or rich. So I knew I wanted to use something different.

But during testing, I figured out that you can just use Dutch-process cocoa and, if you add a little bit of baking soda in there to push the alkalinity up, you can have all the flavor that you want from the cocoa powder while still darkening the end result. Plus that puts you more in control. Instead of having to deal with whatever level of alkalization the company is giving you, you can dial it in yourself.

Your book has several passages about bringing control back to the baker. I noticed that you bake your cookies right after mixing your dough, but you also offer a make-ahead option. How do those differences affect the end product?
After resting, cookie dough does thicken up and develop a more complex flavor. But if you look at American cookies from a historical perspective, aging the dough wasn’t something that anyone ever would have done. So to honor of the spirit of American baking, I didn’t want any of my cookies to require aging.

I never bake off everything at once anyway, so I like having cookie doughs made ahead. Unless you’re making it for a bake sale or something where you need it all at once, there’s no reason to bake off all of the cookies at the same time. Bake off what you need now for a craving, and here is information for storing the rest.

How’d you go about research for your copycat dessert recipes? I know industrial candy makers can be territorial and protective of their techniques and equipment; was it the same for, say, Nabisco?
I haven’t visited factories or anything like that as part of this. Mostly because that anything that I saw there couldn’t translate to the home kitchen.

But interestingly, there are so many books and trade journals that are available. Like the professional cracker and cookie manufacturer. These are documents that were published in the ‘50s and ‘60s that are available, so it’s like I didn’t really feel like I needed to visit because I could just kind of read about common techniques in a factory-type setting. And those journals provided a lot of historical context about not just how the desserts were made, but how they were marketed and shared.

I was so excited to see a recipe for homemade sweetened condensed milk. It’s one of my guiltiest packaged food pleasures. Why did you develop a homemade version?
As a kid, I relied on sweetened condensed milk for pumpkin pie, key lime pie, dolly bars, and just having it as a pancake topping or ingredient for French toast—it just seemed like a bummer to have it as an ingredient you could only get in a can from the store. I also knew that if you made it yourself, that would give you a lot more opportunities for infusions to make your own flavors.

I’m not even sure how I came to the idea of adding cream to it, because I just knew that with condensing milk alone, there’s a lot of stability issues as the dropping pH can curdle it. Cream’s a much more stable product and doesn’t scorch or curdle the same way if you add something acidic.

I eventually got away with basically the least amount of cream you can add to cook this as fast as possible. You can do less cream but it takes longer. So for me it was a happy balance between the end product but also the time-saving factor.

In your research, did you come across a lot of back history about sweetened condensed milk besides just kind of the preservation end of it? Was there a big marketing push for that product?
The history of it is caught up with pumpkin pie and the company Libby’s. They got their start as a company that was canning meat products, like meats for pie. So they had a lot of connection to the cattle industry. They expanded their product line with condensed milk as a way to round off their offerings, because they had all these farmers who were slaughtering cows to be part of the potted and canned meat situation, but they had all the heifers that were basically just going for diary. They ended up adding condensed milk to their product line in the early 1900s.

There were already other brands of condensed milk; Carnation and Borden’s predate them. But Libby’s, because they were already so into canning and other products, had a really good distribution network, and a good manufacturing system. They introduced an element of competition into the canned milk industry that didn’t seem to exist before, which I think popularized the use of canned milk in home kitchens.

How many times did you have to cook that recipe to get it to where it is now?
Oh gosh, easily hundreds of times. Then I had to test the pumpkin pie so many times. And the key lime pie too, so there was all the homemade condensed milk for that as well.

This is how I binged the first season of Game of Thrones. The milk condenses in 45 minutes, about the length of an episode, and you literally can’t walk away or use both hands to type, so I’d put my laptop nearby and start streaming. Suddenly I’d made 13 batches. My husband asked, “have you been watching Game of Thrones literally all day?”

It was totally work.