How the Empanada Brought Two Latin American Chefs Together 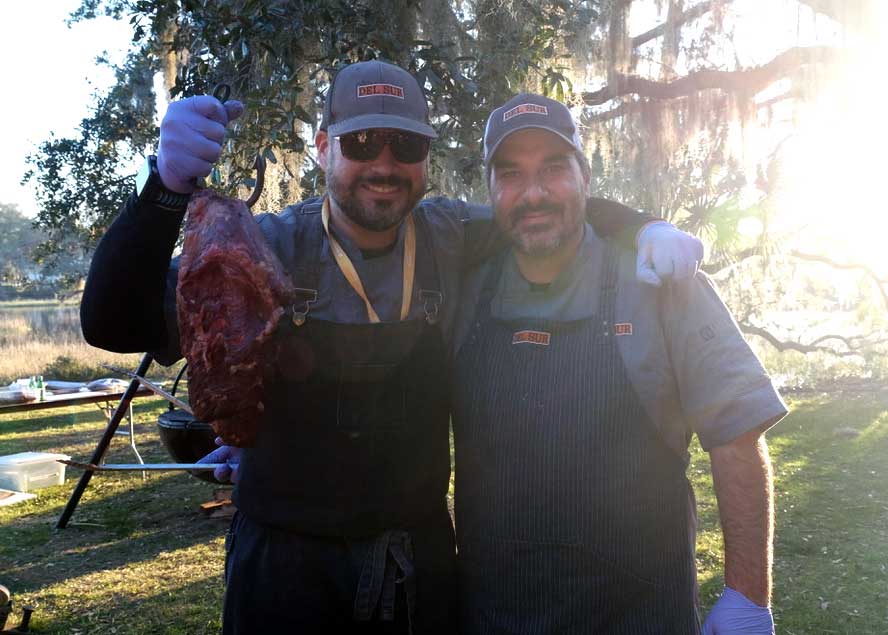 Chefs Hernan Stutzer and Alberto Llano have been friends since they met at Le Cordon Bleu in Miami. Today, they offer Patagonian-style cooking at two locations of Del Sur Artisan Eats—one in Miami, and one in St. Simons, Georgia. Erin Scottberg
SHARE

Hernan Stutzer and Alberto Llano met at culinary school in Miami, where they bonded over a passion for the Argentinian tradition of barbecue called asado, and the many iterations of the Latin American empanada. The two joined forces shortly after to open Del Sur Artisan Eats, first in Miami, then at a second location in St. Simons, Georgia. As part of our “Beyond Borders” series, a collaboration with the Charleston Wine & Food Festival, the friends and business partners talk about the influences that brought them together.

“Once we began exploring the tradition of the empanada, things really took off.”

Hernan and I met at the Cordon Bleu and found that, in addition to a shared love for cooking, we had in common a real passion for the empanada. Every country has its own style. In Argentina, where Hernan grew up, the dough is made with flour and it can be fried or baked. I’m from Colombia, where the dough is made with yellow corn and mainly fried. We’ve been working together for ten years, working to bring this Latin American street food to the next level. —Albert Llano

Typical Argentinian beef empanadas are fried, and we happen to think that when you prepare them this way, they taste better. The gauchos cook these beef turnovers in fat in big cauldrons over the open fire. When made like this, beef empanadas are one of the quintessential flavors of Argentina. —Hernan Stutzer

“The common denominator is fire.”

I was eighteen when I moved to the United States, to a neighborhood in Miami Beach where the Argentinian community lives. I really began to appreciate their cuisine, especially the asado, and developed a passion for cooking outside over the fire. Between Latin American cuisine and the food traditions of the American South, cooking over the open fire is one of the many commonalities. —AL

There are a lot of techniques that Southern cooking shares with South American cooking. The indigenous Timucua of southern Georgia and northeastern Florida, for example, would cook underground, leaving protein buried under embers—the slow cooker of the older times. Argentine gauchos used the same technique. And nowadays, smoking is important in Southern cooking; there’s the same love and passion for the fire. When we moved here, we realized how many things our culture shares with the South. —HS

“The love our families put into their cooking really influenced us.”

I remember my mom, my grandmother, and my aunt folding empanadas on the days we held a family asado. There’s a very specific technique involved. The way you close the empanada tells you what kind of filling it has—the beef empanadas are folded onto themselves in a braided pattern, and the ones filled with chicken are shaped to look like a cock’s comb. The men would do the fire cooking, and the ladies from the family would make the empanadas. They put so much care into it. —HS

Preparing comforting stews with my mother and grandmother in Colombia absolutely inspired my love of cooking. That is another thing that Hernan and I share: Our families sparked this passion. —AL