The Boy Who Ate the World 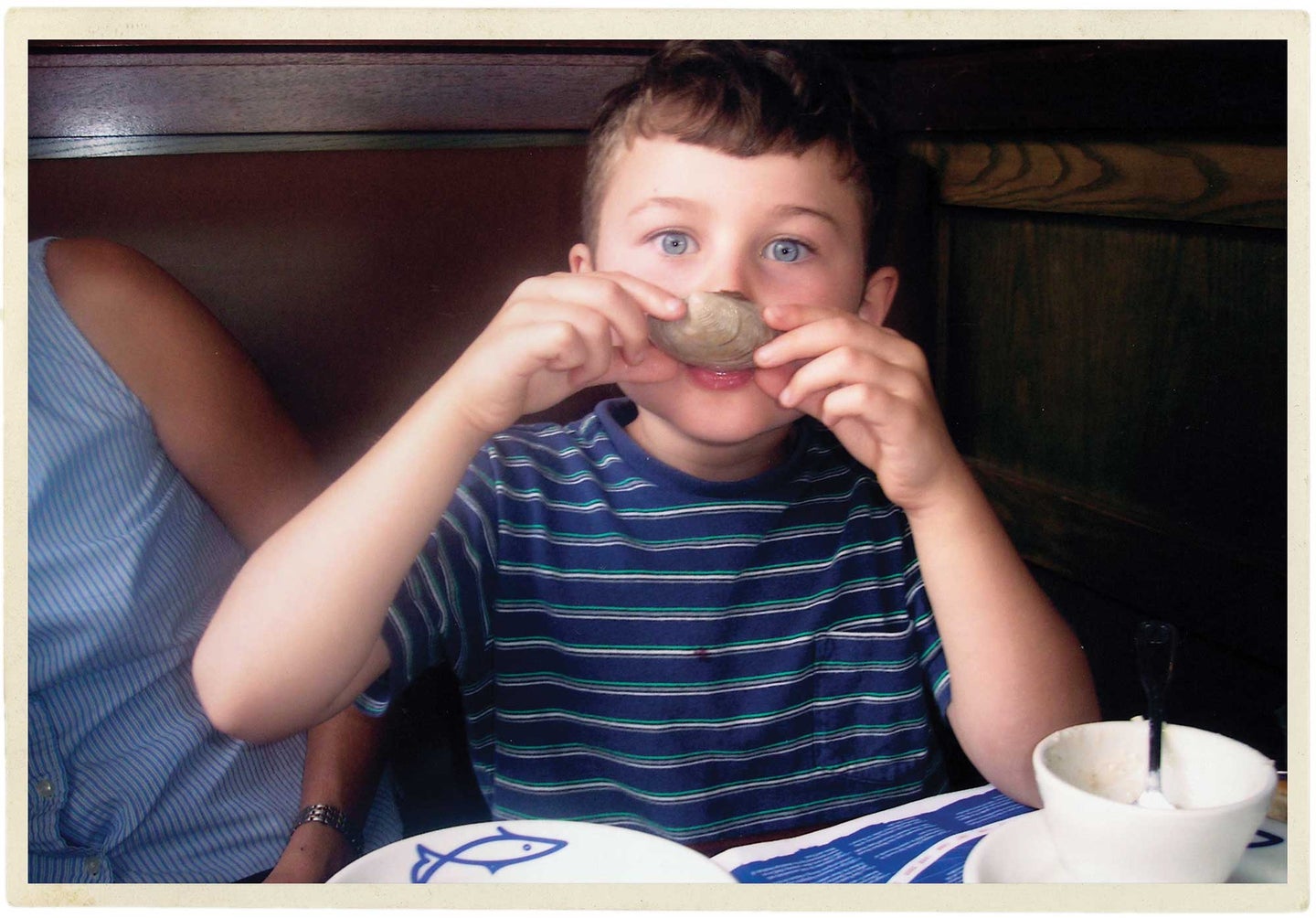 My son, James, was a SAVEUR baby, born in 2001, three years after I joined the magazine as an editor. I’m reasonably certain that he was conceived during a work trip (not as scandalous as it sounds—my husband was with me), he feasted in utero on dishes from the test kitchen, and I went into labor just hours after dinner at an Italian restaurant we’d recently featured. If ever a kid were destined to be a food enthusiast, it was James, who signaled his enthusiasm upon delivery, latching onto me with a gusto that caught the nurse’s eye. “He’s an eater!” she exclaimed.

My husband, Mike, and I were both culinary journalists, and I suppose we would have been a little disappointed had we given birth to someone who was indifferent to or overly fussy about what he ate. But that was not an issue with James—from the moment he could handle solids, it was clear that he shared our passion for food. And he was up for trying anything. We brought him on an assignment to France when he was three years old and watched him devour a plate of lamb’s testicles, followed by a generous chunk of foie gras. While at an aquarium the following year, he pointed to a fish tank and said, “Can we eat them?” We laughed, but he wasn’t joking. In kindergarten, his class read Charlotte’s Web. When Mike asked him if he was concerned about Wilbur the pig’s fate, he dismissively replied: “Of course not. If Wilbur dies, that means we get HOT. JUICY. BACON.” (James was a compassionate child, I swear, but he led with his appetite.)

He didn’t just like to eat, though; he had a deep curiosity about food and flavor, a curiosity that was nurtured to a large extent by SAVEUR. During his visits to the office, I’d bring him into the kitchen, and he would pass judgment on dishes as if he were the editor in charge of the story. He gave more than a thumbs up or thumbs down: he liked to talk about what we were tasting, whose recipe it was, and the ingredients that went into it. He seemed to have a particular knack for identifying herbs and spices. Melissa Hamilton, then the magazine’s food editor, once served him potato salad. Without missing a beat, he asked, “Is there tarragon in this?” She shot me a half-amused, half-startled look and said, “You’re in trouble.”

I continued to work after James was born, so our time together during weekdays invariably revolved around dinner. Even at the end of a long day, I still liked to cook, and James liked to hang out and help me. He would stand on a chair and squeeze whole canned tomatoes for pasta sauce, peel shrimp for scampi, mash together a miso marinade for salmon, whisk eggs for frittatas, and stir broth into risotto, waiting impatiently for the liquid to disappear before adding the next ladleful.

Get the recipe for Miso-Glazed Salmon »

I came to cherish our nightly ritual in that cramped galley kitchen. I also found immense pleasure in cooking for him. It’s a cliché to say that you cook best when you cook with love, but like many clichés, it happens to be true. While I’d always put care into the meals I made for family and friends, there was something more primal about the effort that went into food I made for James. It was perhaps the most powerful expression of motherhood that I’d experienced, and I never had more satisfaction as a cook than watching him scarf down my food in his high chair and hearing him say, “Good, mama!”

Our daughter, Ava, was born in 2004. A second child doesn’t double the workload: it quadruples it, and I quickly came to realize why even the most dedicated home cooks tend to retreat from the kitchen when they have young kids. Although we did a little more takeout than I might have wished, I still tried to hit the kitchen most nights of the week. Fortunately, Ava turned out to be a pretty good eater herself, and was willing to try almost anything I made at least once. But James had become my cooking muse, the voice in my ear and head as I stood at the stove.

And he kept me honest. If I took a shortcut, like not browning meatballs before I put them in the sauce or not blind-baking the crust for a quiche, he noticed. When I was in a rush to get a dish on the table and didn’t check the seasoning first, which I had taught him was an essential step, he called me out. He wasn’t obnoxious about it—not at all. He just knew, from all those hours by my side in the kitchen, that things tasted best when done the right way. He made me want to do better, and my food was better because of him.

When James was old enough to start cooking by himself, I was struck by his attention to detail. He would garnish a plate with a wedge of lemon, run outside to pick fresh mint for tea, twirl servings of pasta just so. Those were the kinds of things that I rarely did anymore, but his exactitude didn’t shame me. Quite the opposite: it filled me with pride. His zeal in the kitchen could be maddening—James was not exactly economical when it came to the use of utensils, pans, and ingredients—but mostly it was fun, and inspiring, to observe. And as his interest in food deepened and his appetite grew more prodigious, cooking for him became even more rewarding (even if filling him up became more challenging).

It turned out I wasn’t the only one who loved to cook for James. At the reception following his high school graduation, the school’s chef and the rest of the dining hall staff came over to get a picture with their “most satisfied customer.” I guess he’d been their muse, too. As I watched this funny scene unfold, I realized that I’d soon be saying goodbye to James myself. I knew it was just about time for him to leave home, and part of me was ready for this next step.

I definitely wasn’t going to miss all the laundry generated by my now 6′ 2″, 190-pound man-child, or tripping over his fishing rods left by the front door, or randomly discovering protein bar wrappers all over the house (the bathroom drawer!?). But the thought of not cooking for him, of not having him in the kitchen, of not seeing his face light up when he tasted something delicious suddenly filled me with sadness. So much of our relationship had revolved around food, and preparing and eating it wasn’t going to be the same without him around. I was on the verge of slipping into a funk when James walked over and snapped me out of it: “So,” he said, “what are we doing for lunch?”

Kathleen Brennan is a James Beard and IACP award-winning cookbook/food editor and writer. She and her former SAVEUR colleague Caroline Campion wrote KEEPERS and The Dinner Plan to help busy cooks survive the weeknight dinner gauntlet.