Back when Marcella, Julia, and Marion ruled the world. 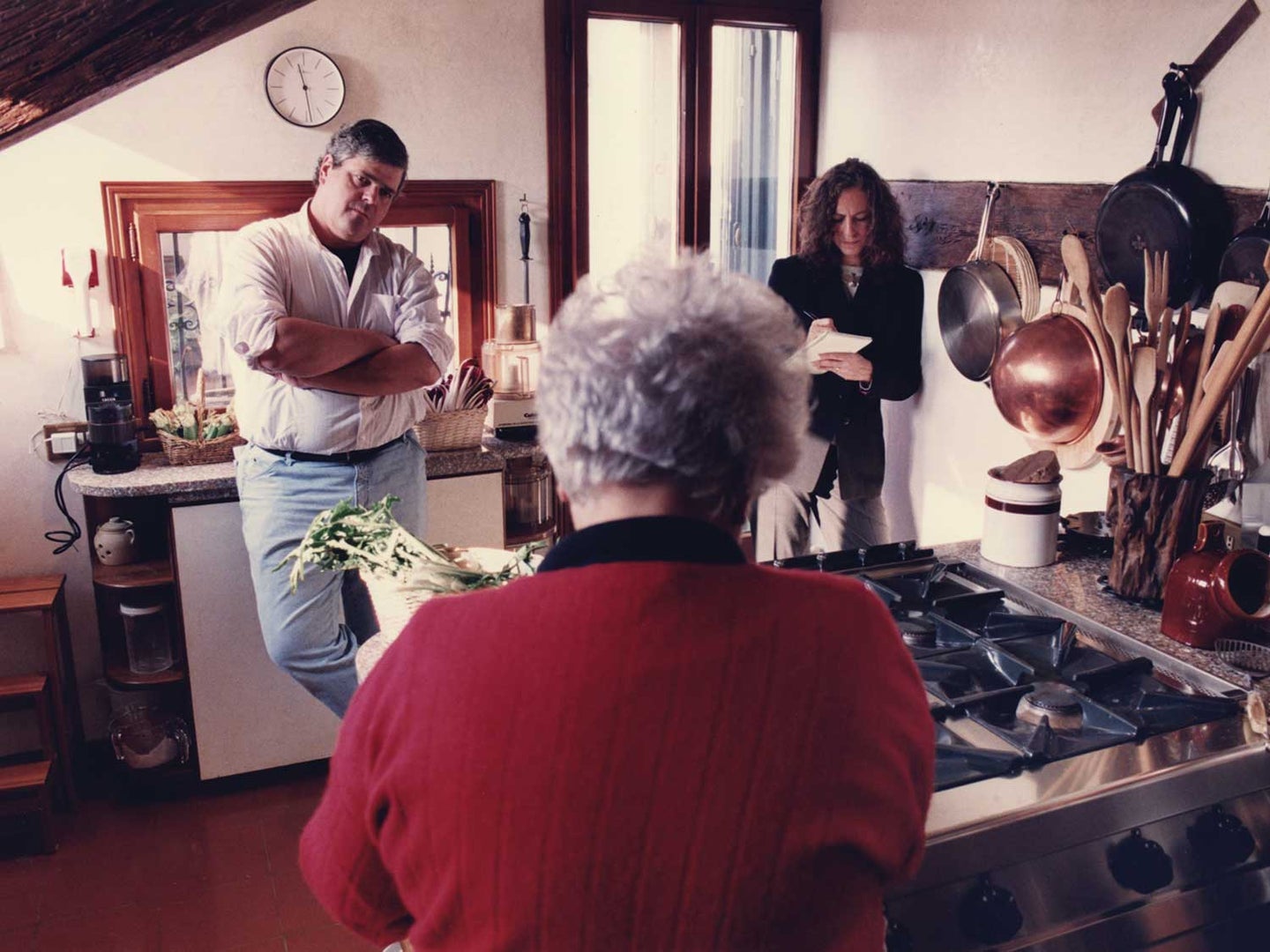 Saveur’s first editor-in-chief, ­Dorothy Kalins (right), and executive editor, Colman Andrews, in the Venice, Italy, kitchen of the late Marcella Hazan, whose back is toward the camera. Courtesy Roger Sherman
SHARE

This story is part of our 25th Anniversary extravaganza, a celebration of the magazine’s first quarter century. For more essays from former Saveur staffers, click here.

When a handful of us shut ourselves in a room to birth a new food magazine, we had no idea what Saveur would be, but we were damned well sure what it would not be. Instead of dumbing down, we’d go deep. Instead of “Six Ways with Pork Chops,” we’d connect recipes to their cultural roots. In a world of low-fat cassoulet, we’d be the publication to actually visit Castelnaudary, where the dish was born.

We were seasoned writers and editors and cooks accustomed to working together, traveling together, arguing with each other. Colman Andrews, journalist and critic, had already published the seminal Catalan Cuisine. Christopher Hirsheimer oversaw food coverage at Metropolitan Home, the magazine I’d run for 11 years, and was about to become an award-winning photographer. We had history and mutual respect.

Other food magazines didn’t seem interested in food’s provenance or rituals. We were. We felt an urgency to reconnect food with its origins. We believed that recipes have stories to tell; we were convinced that knowing the origin of a dish fixes it in the mind, and that we weren’t alone in our hunger for meaning. Because cooking is a personal act, our articles would be personal, too, shortening the distance between writer and reader. And if our startup budgets meant we couldn’t pay top dollar, we hoped the best writers and photographers would be drawn to our insistence on quality and authenticity. (They were.)

At Saveur, food wouldn’t be photographed in fantasy setups. We felt cooking was hard enough in a distracted world (and that was 25 years ago!) without the further intimidation of over-lit “food in heaven” photos. We’d get the hell out of the studio, celebrate natural light, and shoot on location. Sans food stylists. And prop stylists. The resulting imagery (hands-on, a bit messy, just-cooked) would benefit from graphic design so timeless as to read modern. “This magazine wants to look like it’s been around forever,” said founding creative director Michael Grossman. Amen.

Of course, launching a magazine with a name no one could pronounce presented a challenge. (It means “savor,” we’d repeat.) Our beloved publishing director, Joe Armstrong, was congratulated by his mother’s friends down in Abilene, Texas, for his important job at that new religious circular, Savior.

But Chris Meigher, who founded Saveur’s original parent company, Meigher Communications, was willing to take a risk on the French name. The “s” in Saveurs—the French magazine this one was based on—was dropped, and we ran with it.

The Saveur staff created this mock cover when Kalins left the magazine, in 2001, to become the executive editor of Newsweek. Courtesy Dorothy Kalins

What was the food world like in 1994? We could still get ­Julia and Marcella on the telephone. The late, great ­Marion ­Cunningham once stuck her head into the tiny office ­Christopher, Colman, and I shared, exclaiming cheerfully, “I just wanted to see what you three were up to!” Paula Wolfert sat on the floor of our conference room and hand-rolled couscous from semolina. André Soltner stopped by the Saveur kitchen and demonstrated how to get a 13th egg from a dozen by scooping the whites from each broken shell with his thumb. It was genuine curiosity, not mere perversity, that drove us to put saffron on the cover. Newsstand sales? Whatever. I mean, women in Spain still pick threadlike stigmas from crocus blossoms with their fingers!

To mark 1999, the last year of the old millennium—and frankly, to give our publisher a fresh idea to sell—I dreamed up the “Saveur 100.” Next, I had to convince a staff wary of any enterprise that prioritized brief blurbs over 14-page features. But with the battles came the fun. In the first of what matured into an annual issue, we praised Cuban mojitos, canned Portuguese tuna, and Chupa Chups lollipops. We photographed Daniel Boulud and Jean-Georges Vongerichten duking it out in Central Park (“New York Has the Best French Restaurants”), and crowned Edna Lewis our “Favorite Southern Cook and National Treasure.”

That world is gone. Used to be, the only intersection of “food” and “tech” I encountered on a daily basis involved my Flying Toasters screensaver. And I remain (justifiably) fearful for journalism in the digital age. How can we process the inevitable onslaught of information without editorial intermediation? But I see good things, too. I’ll admit to an embarrassing reliance on recipes from NYTCooking.com. I depend on the hard-to-find ingredients e-commerce provides. On Instagram, I’ve learned to handle hen of the woods mushrooms from @foragerchef in the Twin Cities, and traveled with chef @­anitalonyc on a 30-day trek through China. I recognize that when Eater went national in 2009, it raised the standards for food reporting. And I was part of the move that made the James Beard Awards platform-neutral.

Nevertheless, it puts my face in a permanent frown to contemplate our collective journey from the French beekeeper’s daube to Instant Pot. Though I’ve come to terms with avocado toast, you’ll still catch me snarling about born-yesterday food editors who think they’ve discovered age-old cooking methods or consider chefs the center of the universe—which they only sometimes are.

The universe Colman, Christopher, and I covered innocently has disappeared. No longer is it so safe to wander the world. We suspected, even as we created this magazine, that home cooking would become an urgent affirmation of our daily lives. We could not have guessed how urgent. On 9/11, when I was the exe­cutive editor of Newsweek, it seemed that three words—Osama bin Laden—signaled the end of exploratory optimism.

In late 2019, we order meals prepared in delivery-only ghost kitchens. Could anything be less connected? Now, more than ever, we need a new Saveur. I’d like to say that I could not have imagined that the 22-year-old girl, 15 minutes out of Vassar when she joined our staff a quarter century ago, would become editor of this magazine. But as Christopher predicted then: “One day, we’ll all be working for Sarah Gray.” And so we are.

Dorothy Kalins is currently writing a book about cooking called The Kitchen Whisperers.