A Mini-Guide to Modernist Ingredients 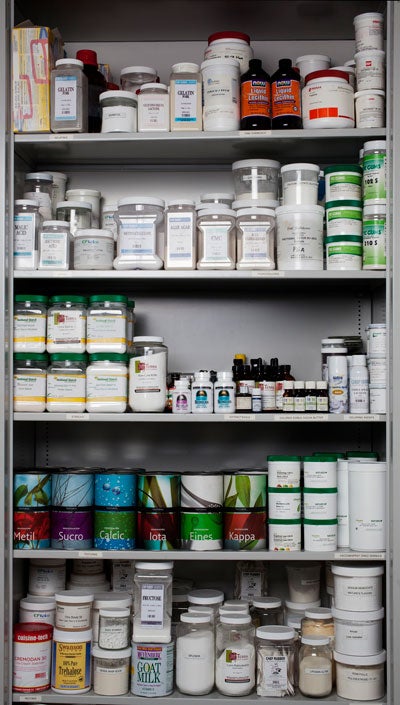 Acids: lactic acid comes from sour milk, yogurt, cheese, and other dairy foods, while malic, tartaric, and citric acids are derived from fruits. Malic acid gives green apples their natural tartness; tartaric acid is found in grapes. These acids are used both as seasonings and for their special properties. Lactic acid, for example, can coagulate protein gels, while tartaric acid is an antioxidant and sometimes can prevent crystallization of some sugar syrups. All of these ingredients can be purchased online, but citric acid can also be found in many grocery stores, and malic acid is sold by some brewing-supply stores.

Agar: agar, also called agar agar, is a clear, tasteless gelling and thickening agent. Derived from seaweed, it has been used in Asia for centuries and can now be found in most grocery stores in America.

Albumin powder: this powder is formed from dehydrated egg-white proteins. It is used to make flavorful gels and foams. You can find it in most grocery and kitchen-supply stores.

Bromelain: used as a meat tenderizer, bromelain is a naturally forming enzyme found in pineapple that breaks down proteins. We have used it to extract jus from meat cooked sous vide, among other uses. It can be purchased online.

Calcium chloride: calcium chloride is a mineral salt of calcium used to make gels and also to firm up the skin of beans. It can be purchased online.

Calcium lactate: this salt is created by the interaction of lactic acid and calcium carbonate. It is used as an alternative to calcium chloride to toughen the skin on beans and to add crispiness to pickles. Modernist chefs mostly use it to make spheres of gels. It is sold online.

Carrageenan: carrageenan comes in three different varieties: iota, kappa, and lambda. Iota carageenan makes soft, elastic gels. Kappa carrageenan makes firm, brittle gels. Lambda carrageenan thickens liquids but does not cause them to gel. All three kinds are derived from seaweed; carrageenan takes its name from a fishing village in Ireland, where the seaweed has traditionally been used to make pudding.

Diastatic malt powder: this powder contains the enzyme diastase that occurs naturally in grains and converts starches into sugars. It is used as a rising agent for dough and to accelerate the conversion of starch into sugar. You can find it most brewing-supply stores, as well as online.

Gums: all gums are polysaccharides derived from plants. Gums swell when they become wet. Xanthan gum is made from fermented carbohydrates (mainly sugars). Guar seeds contain endosperm, which is the basis for guar gum. While both are used for thickening, xanthan gum is perhaps the most versatile hydrocolloid, working over a wide range of temperatures and pH levels. Xanthan-thickened sauces become thinner when stirred, and set again when allowed to settle. Both can be found in grocery stores.

Insta Cure #1: used for curing meats, this cure is a blend of 93.7% salt and 6.25% sodium nitrite, plus a safety coloring. Insta Cure #2 is different and cannot be substituted. Insta Cure #1 is used in various forms of charcuterie and can be found in stores catering to that specialty.

Lecithin: most commonly derived from soy beans but sometimes from egg yolks, lecithin is an emulsifier used to prevent liquid mixturess, such as vinaigrettes, from separating. It is sold in health-food stores.

Monosodium glutamate: better known as MSG, this unfairly maligned agent lends umami flavoring to foods. Although many people believe it causes headaches, no scientific research has come to that conclusion. It is a salt of an amino acid derived from the fermentation of beets, sugar cane, or other sugar-rich foods. It can be found in most grocery stores.

Potato starch: perhaps the most straight-forward sounding Modernist ingredient, potato starch is a fine powder extracted from potatoes. It is used as a thickener in place of the more traditional flour without inhibiting flavor. It is sold in grocery stores.

Sodium citrate: the salt of citric acid (see above), sodium citrate is often used as an emulsifier in reconstructed cheese products. It also is used as a preservative or to add acidity or tartness liquids. You can buy it online or in health-food stores.

Tapioca maltodextrin powder: this modified starch is derived from tapioca. It is unique in its ability to transform oils into powders that melt back into oils when they become wet. Tapioca starch is purified from the root known as manioc, cassava, or yuca. Tapioca maltodextrin is commonly referred to by its brand name, N-Zorbit, and can be found online.

Vital wheat gluten: this product is also called gluten flour or gluten powder. It is the extracted, dried gluten found in wheat, which contains the proteins glutenin and gliadin. Together, these proteins lend strength and elasticity to dough and “bite” to noodles. Vital gluten can be found in many grocery stores, as well as online.

Whey protein isolate: not be confused with flavored whey powder, this ingredient is a concentrated whey protein from which the sugar lactose has been removed. Whey protein isolate can be used in myriad ways: as an emulsifier, a foaming agent, a thickener, and a gelling compound. Health-food stores and some grocery stores carry it.

Wondra: Wondra, produced by General Mills, is the most common brand name of pregelatinized wheat flour. It takes the place of traditional flour in many recipes because it thickens without clumping or adding the “raw” taste of uncooked wheat flour. It is sold in grocery stores all around the U.S.