In the timeless French city of Dijon, mustard isn't merely a condiment, it's the spice of life. 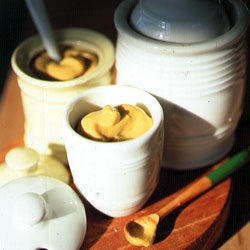 There probably isn’t a brasserie or bistro in France without a jar of mustard already on the table. Mustard, like salt and pepper, isn’t something you even have to ask for. And there isn’t a city in the world more associated with mustard than Dijon.

Dijon is a great city in its own right, with or without mustard. A walk along its rue Verrerie, past its handsomely preserved half-timbered houses, testifies to that. So does a visit to the Palais des Ducs et des États de Bourgogne, a splendid souvenir of the city’s golden age, in the 14th and 15th centuries, when the dukes of Burgundy presided from Dijon over a realm as powerful and wealthy as France itself. But above all, it is wine and food that give Dijon—capital of the Cote d’Or, which is one of France’s greatest vineyard regions—its flavor.

In gastronomic terms, Dijon may seem to live in the shadow of Lyon, a little more than 100 miles to the south—but that hasn’t stopped it from becoming a gourmet powerhouse in its own right, famous for the “rich winy spiced cuisine” that author M.F.K. Fisher celebrated after living in the city for a time in the early 1930s.

Dijon is where Fisher met, and fell in love with, French cuisine. It was here that she feasted on escargots a la bourguignonne and Charolais beef, and discovered the city’s famous pain d’epices, or gingerbread. It was here, in this city surrounded by rolling hills covered with vineyards, that she sampled the great wines of Burgundy and drank the aperitif made of white wine and the local currant liqueur, creme de cassis, that would later become known as Kir (after a local clergyman and mayor who favored it). And it was in Dijon that Fisher learned about mustard—the burnished-yellow, creamy condiment for which the city is renowned all over the world.

If Dijon has a distinguished history, mustard has a history of its own. The Egyptians entombed their kings with bags of mustard seed. The Greeks thought mustard improved memory. The Romans, who made mustard in a way strikingly similar to the modern method, brought mustard seeds to Burgundy—Dijon was strategically located along their major trade routes—and by the Middle Ages, the bright yellow blossoms of abundant mustard plants could be seen covering the region’s hills each spring.

Grapevines were also growing in profusion in the region by this time. Since, in making mustard, wine or vinegar is the traditional medium with which crushed mustard seeds are mixed, this was obviously a product waiting to happen—for what recipe could be easier than “Crush seeds, add liquid”?

Because of the essential affinity between mustard and wine, the condiment was soon being produced in other wine-growing regions throughout France as well—but it really caught on in Dijon. As early as the 14th century, local ordinances in Dijon laid out rules for its manufacture; one specified the use of only “good mustard seed soaked in good vinegar”. By 1634, an official alliance had been formed in Dijon to regulate the profession of the moutardier.

There are two basic types of French mustard: old-style, a coarse-grain, mild mustard often referred to in French as a l’ancienne; and Dijon-style, a creamy, spicier product. The former is made by mixing cracked, unhulled seeds to a rough paste. The most famous preparation of this type comes from Meaux, on the edge of the Champagne region, though it is also produced elsewhere. (Even in Dijon, a small quantity is made in this style.) Mustard makers in Bordeaux use the local red wine vinegar to produce their own version of the coarse-grain mustard.

But the smooth Dijon-style product remains by far the definitive French mustard. Ninety percent of all the mustard made each year in France is of that kind; 70 percent is produced in and around Dijon itself.

All mustard was “a l’ancienne” until the beginning of the 18th century, when an Englishwoman named Mrs. Clements began milling mustard seeds the way one milled wheat—grinding them and sieving the powder through coarse cloth to remove the husks. The technique produced a pungent mustard that married well with hearty foods. Dijon’s moutardiers discovered the new process and adopted it as their own—lending it their city’s name.

Mustard was made in Dijon with hand-operated grinding mills until the middle of the 19th century, when one of the city’s most famous sons, moutardier Maurice Grey, invented a steam-driven machine that could crush the seeds, remove the husks, and grind the remains to a fine powder in one operation. Today, husks are removed from cracked seeds by centrifuge before they’re ground into a paste.

Though techniques and recipes can vary, laws strictly regulate the manufacture of Dijon mustard, and—like the wines of Burgundy—the product is protected by an appellation controlee, granted in 1937. The law states that only black and/or brown mustard seeds may be used in dijon mustard (the product of milder white seeds may be labeled “condiment” but never “moutarde”), and that the seeds must be mixed with either wine, wine vinegar, or verjus, which is the juice of unripe grapes. Wine vinegar, which produces a mustard which is slightly more pungent than the other liquids, is most widely used in Dijon. Salt and herbs are added—generally summer savory, tarragon, and lavender, or a combination thereof—and, with a touch of golden turmeric to heighten color (and sometimes sulfur dioxide to preserve it), the mustard is complete. Flavored mustards, with such added ingredients as green peppercorns, honey, horseradish, shallots, or, in earlier times, anchovies or truffles, have never been allowed to bear the Dijon label.

But the Dijon mustard law says nothing about the provenance of the mustard seeds. When the rules were written in 1937, the idea of importing seeds from another part of France, much less another country, was probably unthinkable, so abundant were the mustard fields around the city. Now, though, Burgundian farmers have given over most of the fields around Dijon to more profitable crops, like colza, used to make canola oil—and most of the seed used in Dijon mustards today is imported from Canada. The authors of the law apparently didn’t think they had to specify where Dijon mustard would be made, either. Though the vast majority of Dijon-style mustard is still made in the city itself, it can be legally produced anywhere in France as long as the rules about mustard seeds and manufacturing techniques are followed.

Back in the days before mega-corporations and industry consolidation, there were close to 40 mustard houses in Dijon. At that time, shoppers carried their empty mustard pots to local shops for daily refills. Today, though some smaller producers still exist, most independent moutardiers have been bought up by, or merged with, larger companies.

And what about Grey-Poupon? This famous brand has now all but vanished in France—though the name lives on just about everywhere else. Grey-Poupon was formed in 1870, when the aforementioned Maurice Grey made his associate, Auguste Poupon, a partner in what had hitherto been the Maison de Grey. A century later, in 1970, the directors of Grey-Poupon and of another Dijon mustard firm, Andre Ricard, having earlier bought the popular Maille label, formed a conglomerate called S.E.G.M.A. Maille. Soon afterwards, the new company decided to phase out the Grey-Poupon label in France. It is still, however, manufactured for export, and a small amount continues to be produced for sale at the historic Maille-Grey-Poupon boutique on the rue de la Liberte in Dijon itself. (M.F.K. Fisher wrote of smelling the aroma of mustard as she passed the shop—which she called “a kind of showplace.”)

The Grey-Poupon sold in the U.S. is another story: Heublein purchased the American rights to the name from the original company in 1946—and though it is prominently labeled as “dijon” mustard, our own Grey-Poupon is now made by Kraft.