How Food Blogging Changed My Life 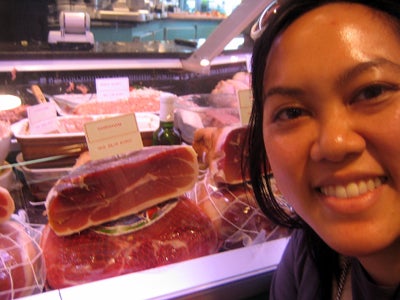 I began my food blog, Eat Drink One Woman, in July of 2004, which in internet terms makes me something of a stone-ager. Back then, the idea that I might be a professional food writer seemed like a pipe dream; I loved writing about food, but I had no idea how to make a career of it. So I did the next best thing: I wrote about food for myself, on my own website, and waited to see if anything would come of it. I covered the kinds of restaurants I liked most in New York City and foods I came across while traveling (like the Ganda ham I took a picture with while in Belgium, pictured right.) I mostly wrote to exercise my writing muscles and to make myself laugh; I had no idea at the time how much it would shape my career and my friendships.

My first regular weekly feature was “You Are What You Eat,” a Proust questionnaire-ish feature on New Yorkers’ gustatory likes and dislikes. After it became clear that I’d soon run out of friends to interview, I reached out to fellow food bloggers I admired. The first internet friend I made that way was Adam Kuban, a then copy editor by day and proprietor of two blogs, Slice and A Hamburger Today. Serious Eats hadn’t yet given his blogs a home; he was just another guy with a passion for particular foods, a few good URLs, and a knack for great web writing. Not only did he happily answer my questionnaire, but he also introduced me to other food people he thought I should feature. Unlike celebrities, magazine editors, or book authors who funneled mail through fan clubs, assistants, and general P.O. boxes, getting in touch with other bloggers was as easy as finding publicly-posted contact information on their websites and sending an introductory note.

Every site I read would introduce me to other fully-formed blogs I hadn’t heard of. I found extraordinary pleasure in digging into the archives of a new favorite site, getting to know who they are and the food they love. When you read a writer’s words and see what their cameras capture every day, their lives become an integrated, regular part of your own. If you’re like me, you remember when Smitten Kitchen announced her pregnancy with a recipe for cream cheese-covered cinnamon buns and an adorable reference to the other bun in the oven. Maybe, like me, you got a little teary eyed and hung in there when The Wednesday Chef revealed, with a forlorn can of baked beans and a broken heart, that she wasn’t ready to start cooking again so soon after the end of a major relationship. And you might have gasped with glee when Orangette told us that she got engaged over champagne and chocolate truffles to the young man for whom she’d baked orange-nutmeg muffins.

As food blogs became more popular, and the genre became more respected, it was exhilarating to watch the shift in journalistic authority. Food blogs leveled the playing field: chefs, cookbook authors, critics, home cooks, and civilian diners like me were all suddenly sitting at the same table. Instead of a rarefied and inaccessible group of print reviewers having a say, suddenly thousands of voices of varying skill levels and interests chimed in, and the conversation became livelier. Soon, sites popped up for niche appetites covering everything from Chinese stir-fry to raw food, written by amateurs and professionals alike. Readers who didn’t have blogs on their own could still join the discussion in the comments sections, which, on sites with the most devout readerships, were as informative as any article.

In 2004, to be a food blogger was to be an outsider in the world of food media. Today, it couldn’t be more different. The Pioneer Woman is about to star in her own show on the Food Network. Heidi Swanson of 101 Cookbooks has added two of her own volumes to the shelf of books that inspired her blog. Readers have proven that they have as keen a sense of talent as the most in-the-know editors, lifting self-made writers like Chocolate & Zucchini, Tartelette, and countless others to the top of the traffic pile (which, in turn, helped to land them book deals). A few years ago, the James Beard Foundation Journalism Awards created categories for best food blogs; today, blogs and magazine articles compete in the same categories.

After years of food writing being a hobby — albeit a passionate one — last year I landed here at SAVEUR as director of the website. It was a natural fit; the magazine has always aimed to celebrate the human spirit behind every dish it features, and to me, the food blog just may be the purest expression of that objective. Writing about food is, at its core, the simple, generous, and beautiful act of sharing a meal with another human being; the internet has eliminated virtually every obstacle to its expression. I feel honored to have been a part of this community for so many years, and to have been a witness to just how rich, vast, diverse, and valuable a world it has become.