I had never truly understood the versatility of matzo until now. 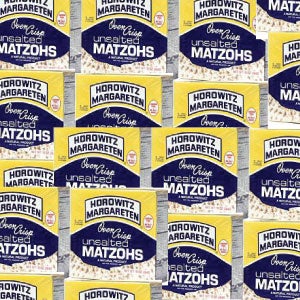 I had never truly understood the versatility of matzo—the unleavened flatbread that is a symbolic and culinary focal point of the Jewish Passover feast—until I attended a seder with the family of my husband, Josh. I had eaten matzo every year at my family’s seder table in memory of the Jews’ flight from Egypt in biblical times, but in our barely observant house it was more a treat than a religious symbol. My dad liked to smear it with butter and make jokes about packing us ham and matzo sandwiches for lunch. In Josh’s kosher household, by contrast, matzo was taken very seriously. His mother, Barbara, kept a few boxes of store-bought Manischewitz matzo in the cupboard during Passover, but there was also the harder-to-find shmura matzo. Remarkably thin and charred around the edges like a wood-fired pizza crust, shmura matzo is made exactly as prescribed by Jewish law: once the water is added, the matzo must be completely cooked in no more than 18 minutes, to preclude any rising.

Matzo, as an ingredient, can be used in many ways, as I learned from Barbara. Ground-up matzo meal can be made into balls for Matzo Ball Soup; pieces of broken-up matzo, called farfel, can be baked with apples and cinnamon for a casserole called kugel; and matzo cake meal can be used for airy chocolate souffles. My favorite matzo-based dish, though, is a staple of many Jewish households: Matzo Brei. Basically a fluffy, fried-up concoction of eggs and moistened matzo, it’s Barbara’s twist on french toast.