My Deli, Myself: Betsy Andrews and Her Grandmother

Life lessons were served with corned beef sandwiches on rye 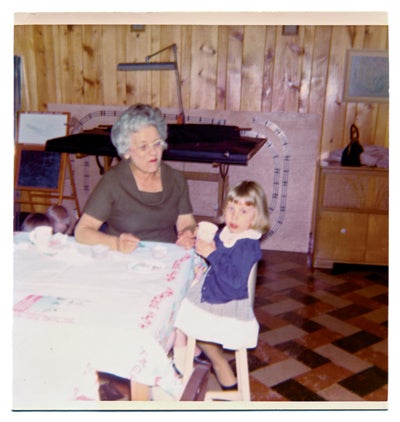 I was raised in a little place on the western border of Philadelphia. It had a blue-vinyl and wood-laminate decor, and there was always food on the table. I am not talking about my parents’ house; I’m talking about our favorite booth—my grandmother’s and mine—at City Line Deli, in Philly’s Overbrook neighborhood. Our booth was the second from the door, from which my grandmother could watch other customers enter and I could gaze out the window. There, several times a week, she and I would eat our favorite foods: for me, a corned beef special, with coleslaw and Russian dressing, on rye; for her, chopped liver, and chicken soup with matzo balls the size of my fist.

My maternal grandmother, Sylvia Benson Kohn, was born in West Philadelphia in 1905. Her father, Nathan, a machinist at the U.S. Mint downtown, spent his early years in his native Kiev before immigrating to the States. Benson was a made-up name, given to him when he arrived. Her mother, nee Kate Bogutz, came to America with her family from Kremenchuk, Ukraine, when she was an infant, around 1885. From her mother, Sylvia learned how to cook: tender brisket in a sweet-sour, tomatoey braise; cabbage rolled with a moist, beefy filling; crisp, golden latkes; chicken stewed whole, stuffed with rice and onions caramelized in schmaltz. She made biscotti-like, almond mandel bread and wafer-thin mohn, or poppy seed cookies. I looked forward to Purim each early spring, when my Grandma Syl would spoon her homemade apricot jam into hamantaschen, those pastry triangles we took to resemble the hat worn by the villainous Haman, the antagonist of the holiday story; hers were the most delicate and flakiest I’d ever tasted.

My grandmother—a longtime widow with a string of boyfriends, a penchant for politics, and a knack for canasta—was a terrific schmoozer, as well as a terrific cook; for her, one of the attractions of City Line Deli was the abundance of opportunities it provided for small talk, with the old guys slicing meat at the counter, with the young gals ferrying platters to tables, with the hugs-and-kisses owners, and with the other customers, almost all of whom she seemed to know. Like much of her generation of Jews, my Grandma Syl’s Yiddish was impeccable. She never taught it to me, but I gleaned some words as she kibitzed at the deli, including the word kibitz itself. Mainly, I learned the terms for foods: kasha varnishkes for buckwheat groats cooked with bow tie noodles, one of my favorite dishes; prakes for stuffed cabbage; knaidelach for matzo balls; pupik, literally “belly button,” not quite the right term, but still what my grandmother called her favorite part of the chicken, the fatty tail.

In the suburbs where I grew up, plenty of kids went to Hebrew school and got bat or bar mitzvahed. I wasn’t one of them. My father had been brought up Catholic; we celebrated Christmas and Easter. But we also shared spirited Passover seders with my grandma’s extended family. I experienced my Jewishness through eating and talking. At home, my parents fought all the time; at the deli, my grandma and I fressed (ate) and kibitzed and fressed some more. So when I read David Sax’s book, Save the Deli (Houghton Mifflin Harcourt, 2009), a paean to such places, I nearly cried. And when I read his story in this issue on the roots of American deli food in eastern Europe (see Roots of the Deli), I gained something more: a sense of where all our kibitzing and cravings for certain foods had come from, before the painful transformations of the 19th and 20th centuries brought my great-grandparents to the States.

As she got older, my grandmother grew smaller. By the time she died, at 93 years old, she was a tiny, skinny thing. But like the garrulous ladies Sax met while reporting at the Bucharest Jewish Community Center, her appetite for a good conversation over good Jewish food remained undiminished. On Grandma Syl’s penultimate birthday, my mother threw a brunch. Grandma stood before a deli platter and held the serving spoon aloft. “I love chopped liver,” she announced. “I’m gonna take it all.” And she did, her wizened face bouncing and dentures clicking with each soft bite.

Since this article was published, Senior Editor Betsy Andrews has received many warm notes from readers across the nation who were moved by her essay. Did you have a special relationship with your grandmother? What did she teach you about food and life? Tell us about her in the comments.