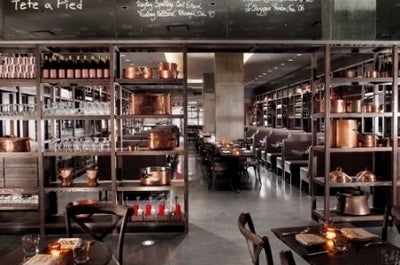 When I spent five months living in Paris in 2000, I fell in love – with loose, fluffy omelettes stuffed with gruyere; creamy pate slathered on crispy baguettes; and pillowy, sweet pains au lait that I picked up each morning at the patisserie on my way to class. After my return stateside, I made it my mission to find solid approximations of these and my many other edible French amours, and though it took some hunting – I tried many a leaden croissant – New York City ultimately supplied my fix. Even better, la Grande Pomme knows no closing times; the City of Light is available any time of day in the city that never sleeps. Here’s a 24-hour guide to eating French in New York.

Noon: Dejeuner
Tucked away on a West Village side street, the humble Cafe Henri (27 Bedford St.; 212/243-2846), with its bright blue door and handful of tiny tables, is the perfect place for a simple French lunch. Try the classic jambon-beurre sandwich (ham and butter on a crispy baguette with a side of cornichons) or choose from one of the lacey and light crepes salees. Cafe Henri’s omelettes are also up to exacting French standards, slightly loose and velvety soft.

2 PM: Un peu de shopping
Murray’s Cheese Shop (254 Bleecker St.; 212/243-3289) offers an impressive array of French fromage, like Persille du Beaujolais, a sweet cow’s milk blue or the preferes des montagnes, a creamy, aromatic approximation of the beloved raw milk reblochon, which is no longer legal to sell in the U.S.
Before opening Le Du’s Wines (600 Washington St.; 212/924-6999), Jean Luc Le Du was the long-time sommelier at the renowned restaurant Daniel. Though Le Du’s sells wines from around the world, the selection of French bottles, representing each of the nation’s growing regions, is extraordinary, ranging from very fine $10 bottles to pricey, extremely rare vintages.

3 PM: Le the
The Adore (17 E 13th Street, 212-243-8742), a rustically cozy snip of a place just off of Union Square, is a French-style tearoom with an Eastern twist. The tea menu features a wide selection of Mariage Freres blends alongside Japanese favorites like Hoji-cha and Sen-cha. Relax with a cup and a plate of light, spongy madeleines.

5 PM: Le petit gouter
The pastry cases at Chelsea patisserie La Bergamote (177 9th Ave.; 212/627-9010) are lined with fine versions of French favorites like moist fruit-filled financiers, delicate meringues, and range of gorgeous gateaux. But the real stunners are the gleaming glazed fruit tarts, sweet and fresh-tasting on top of their buttery pastry base.

6 PM: L’aperitif
Head uptown to the base of the legendary Seagram Building, the sleek, ultra-modern Brasserie (100 E. 53rd St.; 212/751-4840), is the pinnacle of New York urbanity with a side of French flair. Sip a traditional kir royale or the -8˚ Martini (Ciroc vodka, 8 Brix verjus, frozen muscat grapes) and snack on gougeres or a mini croque-monsieur.

8 PM: Le diner
DBGB (299 Bowery; 212/933-5300), the newest and most casual of Daniel Boulud’s New York eateries, updates the classic brasserie with a little downtown edge. Resist the temptation of the menu’s hearty French favorites (including a sublime_ fromage de tete_, the same as the famous version served at the restaurant’s uptown sibling Bar Boulud), and focus instead on the stars of the show: sausages and burgers. Start by sharing a few links among the table—”Parisiennes,” small, tight veal sausages that pop with smooth meaty flavor, or the succulent “Viennoise,” a joyfully messy version of the Austrian kaiserkrainer, stuffed with emmenthaler and served with tangy housemade sauerkraut. The Frenchie burger, with confit pork belly and Morbier cheese on a brioche bun, injects Continental flavors into the American classic.

10 PM: Le digestif
With a wine list practically bigger than the bar itself, the intimate Blue Ribbon Downing Street Bar (34 Downing St.; 212/691-0404) is a cozy after-dinner retreat. Split a bottle or try one of the tasty cocktails like Provençal Punch (Pastis, lime juice and soda) or White Oak, which combines Surrenne cognac with maraschino liqueur, triple sec, and lime juice.

Midnight: Du vin
Snag a burgundy leather stool and pull up to the long zinc bar at Balthazar (80 Spring St.; 212/965-1785), Soho’s ever-popular, always bustling bistro stalwart. Brass mirrors lining the wall are the perfect tool for spying on a crowd of locals, tourists, and the odd boldface name as you sip wine by the glass or splurge on a bottle from the pricey but well-maintained reserve list. For a petit snack, try the justly famous steak tartare or a goat cheese tarte.

2 AM: Le champagne
To keep l’esprit de France going into the wee hours, stop by Flute (40 East 20th St.; 212/529-7870), whose impressive menu of bubblies is anchored by a strong Champagne list, available by the flute, flight, bottle, or in mixed drinks.

4 AM : Moules frites
In the wee hours, hop across the street from Flute to L’Express (249 Park Ave. South; 212/254-5858), a textbook-perfect French bistro experience merged with a 24-hour diner. The moules frites are the star of the show, garlicky and briny, perfect washed down with a bracing espresso to power you through until the sun comes up.

6AM: Les croissants
To assure that you get them at their freshest (and before they’ve run out), hit these downtown bakeries as the sun rises over Manhattan. Start your tour with Ceci Cela‘s (55 Spring St.; 212/274-9179) classic version, a perfect French specimen with a flaky outer crust and diaphanous, buttery interior (note that they open at 7 a.m., but they’ll be in there baking if you show up earlier). A few blocks away, Francois Payard Bakery (116 W. Houston St.; 212/995-0888), has crisp croissants aux amandes studded with almonds and powdered sugar and filled with a velvety almond cream. Patisserie Claude (187 W. 4th Street, 212-255-5911) doesn’t open until 8AM, but it’s worth the wait for a taste of the bakery’s luscious pain au chocolat fresh from the oven.

9:30 AM: Le petit dejeuner
Rest your pieds and recharge for the day at Cafe Cluny (284 W. 12th St.; 212/255-6900), another of the West Village’s picture-perfect Parisian transplants. Start with a grapefruit brulee or mixed berries with cream, and move on to an omelette aux fines herbes and a cafe au lait — or two.

11 AM: Le chocolatier
Famed chocolatier Michel Cluizel has been making chocolate in France since 1948. At his New York outpost Michel Cluizel Chocolate (584 Fifth Ave.; 646/415-9126), indulge in his intensely rich, silky single-source bars (the darkest of which are 99% cacao), springy, crackly chocolate macarons, and for les enfants, milk chocolate lollipops with hazelnut praline.

Noon: La grande finale
The grand-pere of New York French restaurants, La Grenouille (3 East 52nd St.; 212/7521495) has epitomized classic haute cuisine since opening in 1962. Though dinner in the opulent dining room can run well into the three figures, two- and three-course lunches are comparatively affordable, and offer the chance to try the delicate sauteed frog legs or the earthy, sweet calf’s liver with dates and raisins. No matter what your entree, end the meal with one of La Grenouille’s impossibly airy souffles.

Where to stay: Sofitel (45 West 44th St.; 212/354-884)
At this French-owned modern hotel, you’re greeted with “bonjour” or “bonsoir” before being escorted to the chicly appointed rooms, which are sizeable for Manhattan standards and stocked with Bose iPod docks, marble baths, and L’Occitane toiletries. The convenient midtown location makes the Sofitel parfait for exploring the city’s French wonders.**