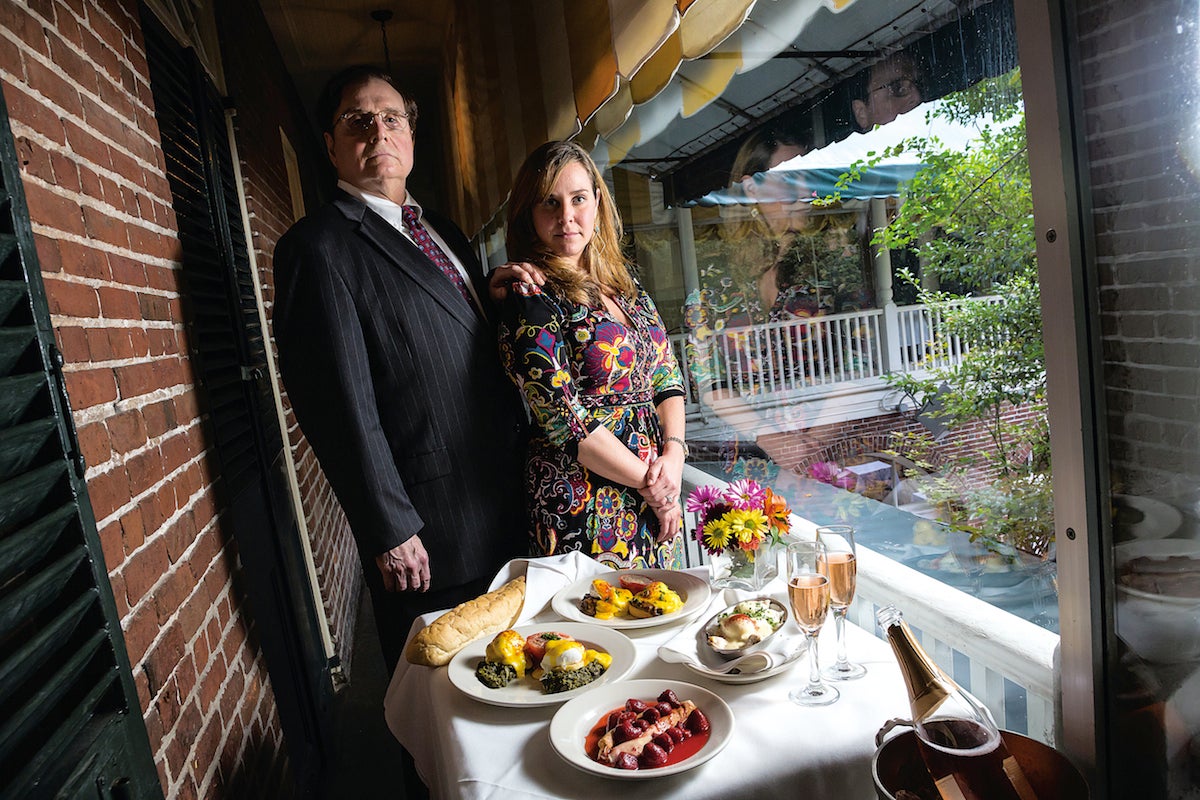 In the photo in Time-Life’s 1971 American Cooking: Creole and Acadian, Ella Brennan stands behind her nephew Pip and a table loaded with “typical breakfast items”—including chilled rose—on a balcony overlooking the courtyard at their French Quarter restaurant, Brennan’s. But something doesn’t look right. The woman who, to many, represents New Orleans hospitality, appears far too stern. When it comes to how the city eats out, Ella Brennan has been an influential person for more than half a century, matriarch of a dynasty of restaurateurs whose establishments define a kind of quintessential New Orleans dining. It started in 1943, when Ella’s older brother Owen opened Brennan’s in the French Quarter. With its lavish music-filled brunches and elegant service, Brennan’s captured all that was grand about eating in New Orleans and almost overnight became the city’s most important restaurant. After Owen’s death, Ella took control. Then in 1974 after a family split (Pip’s brother Ted, shown above with his daughter Alana Brennan Mueller, owns Brennan’s today; the two sides of the family do not speak), she decamped with most of her siblings to the Garden District, where they had bought the century-old Commander’s Palace. The laboratory for Ella’s experiments in cuisine and hospitality, Commander’s launched the careers of influential chefs including Paul Prudhomme and Emeril Lagasse, and its kitchen created dozens of iconic, beloved dishes—shrimp and tasso Henican, eggs Louis Armstrong, and more. Today, though Ella, age 87, is effectively retired, her children, nieces, and nephews preside over a local empire of 13 restaurants that constitute a bona fide genre in New Orleans. Different cousins own different places, and some are more posh than others, but each showcases the family’s trademark style. There’s always a Brennan in charge: Cindy Brennan Davis at Mr. B’s Bistro; Ella’s daughter Ti Martin and her cousin Lally Brennan splitting duties between Commander’s Palace, Cafe Adelaide, and the new Sobou. On the menu, you may find a gumbo or a sherry-drizzled turtle soup. The list of entrees may feature Louisiana seafood, from oysters Rockefeller to sauteed Gulf fish topped with lump crabmeat. For a sweet finish, there may be some riff on bread pudding, perhaps topped with cherries jubilee or reimagined as an ethereal souffle. At the fancier places, your meal will be served “gang style” in a well-choreographed routine wherein a group of waiters float to your table, set down the plates in unison, and retreat before you can pick up your fork. And in keeping with family tradition, a midday cocktail is always encouraged. Though it’s out of fashion elsewhere in the country, there’s still nothing quite like a three martini lunch (the house limit, at 25 cents a drink) at Commander’s: It makes you feel like you’re getting away with something, even in a city that revels in its excesses.