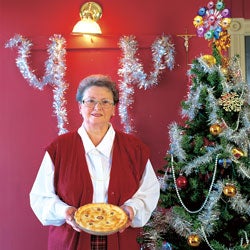 It’s Christmas Eve in rural Quebec, and festive appetites soar. And so, despite the subzero Canadian cold and the five-foot-high snowdrifts obscuring the curves in the road ahead, Claire Morissette, a 39-year-old social worker; her husband, Serge Belanger, a furniture designer; and their children, Veronique, 5, and Genevieve, 9, are in their Ford station wagon driving as fast as they dare to the home of Claire’s mother, Cyprienne Morissette, with visions of dishes to come dancing in their heads. Claire dreams of the warm, fragrant, classic pork pie called tourtiere, which she’ll devour as if it were going out of style. Serge imagines slow-roasted pork, a seductive hunk of flesh so defiantly, deliciously fatty that its juices drip recklessly down chins. And as for Veronique and Genevieve, Grandma’s triflelike bagatelle—a splurge of whipped cream, white cake, Jell-O, and strawberry preserves—beckons them on.

All 24 members of the extended Morissette family are assembling tonight at the clan’s stately patrimonial home in St-Georges, about 55 miles south of Quebec City, for Le Reveillon, the Christmas Eve whizbang, pull-out-all-the-stops French-Canadian holiday celebration that makes other holiday observances look like chance encounters. They are coming to escape the weather (tonight it’s 10 below), to attend midnight mass, and to bask in sentimental old family stories and create raucous new ones. But most of all they are coming to eat till they nearly burst and to marvel at the energy of 73-year-old Grandma Morissette as she moves—scratch that: flings herself—through the kitchen, doting over every bubbling, hissing pot like a mama cat dispensing equal licks to all her newborn kittens.

“She has only two speeds at this time of year: asleep and 78 rpm,” Claire says, as her turbopowered mother—just call her Mother Christmas—ladles melted butter over a roasting turkey, then swiftly spins to pepper a steaming cauldron of pea soup. “Sometimes we have to tie her to a chair to keep her from moving.”

Christmas blasts in like a big brass band in St-Georges, the unofficial southern capital of the farming region of La Beauce. No wonder. Good times came late to the French settlers who, for nearly three centuries, have harvested this harsh yet fertile land of spruce trees, chilly rivers, boulder-strewn hills, and maple groves—at just under a hundred thousand acres, the world’s largest concentration of maples. Lured from Normandy, Île-de-France, Poitou-Charentes, and Brittany to work as tenant farmers on huge tracts owned by _seigneurs _(aristocrats who oversaw the area for the French monarchy), these original immigrants were devout Catholics who sought milk and honey but instead encountered floods, isolation, and winters so long and brutal that many froze to death. La Beauce, with its brooding vistas of the northernmost reaches of the Appalachian chain, was not—is not—green, gentle France.

But, thanks to God’s grace and pure Gallic ingenuity, a hardy handful of these pioneers survived. And for their descendants, life’s rhythm isn’t very different. Many can still be found raising dairy cattle and harvesting the sugar-rich maple sap that flows during spring thaw, the products of which find their way into many local dishes, including soups, stews, and desserts. Most still speak the same rough-and-tumble French dialect, as different from Parisian French as Brooklynese is from the queen’s English. And most still cope with winter’s icy howl with a relaxed shrug and a simple “Ah, c’est l’hiver”—only now, of course, there’s central heating. As Roger Carette, the mayor of St-Georges, sees it, “Beaucerons have long overcome great odds. We know we can survive on our own. It’s been our habit for centuries.”

Another long-standing habit has been to embrace food as a hallowed member of the family. Yes, life can be bitter, but it tastes so much sweeter when there is rich fare to be consumed. And what rich fare it is: the region’s winterproofing stews, roasts, and casseroles are meant to provide nourishment for the entire day. But mealtimes in La Beauce aren’t just about delivering fuel—about work and no play. There are whimsical flourishes that brighten the table, such as fruit preserves and the homemade wines served by Gisele Bolduc, a retired home-economics teacher from St-Georges, especially during the holidays. Crafted from produce abundant in the warm months (beets, blueberries, chokecherries, currants, and dandelion flowers), such meadlike bottlings were once a regional staple; these days, only a few people still bother with them. Bolduc’s wines, made from recipes handed down for generations, add a sweet rush of history to the Christmas season—and summon up summer, too: the dandelion bursts with the warm sunshine of morning; the chokecherry is a brambly afternoon stroll; the beet, a crimson sunset.

“We make a feast of everything here,” says Carette. “When the river overflows, we eat. When someone’s barn burns down, we eat. And when Christmas comes, we really, _really _eat.” Noella Vachon, president of a Ste-Marie farm women’s group and something of a patron saint of local cooking, agrees. “During the holidays, everything is white and quiet,” she says. “It makes us feel special—and like feasting a whole lot.”

North along the Chaudiere River, which winds through La Beauce like a lazy gray snake, on the fringes of a blink-and-you’ll-miss-it village called Vallee-Jonction, the Nadeau family, dairy farmers for two generations, is also deep in Reveillon ritual. A lunch for a large family gathering is being served in the cozy farmhouse kitchen—picture a 1945 Frigidaire ad—of Paul-Émile Nadeau and his wife of 50 years, Therese.

The meal begins with a quick, whispered prayer and warming bowls of soupe au pois, made of dried yellow peas that have been allowed to retain their pearly shape and enlivened with herbes salees, a salt-preserved herb-and-vegetable mixture that gives a green kick to Quebecois soups and stews all winter long. Then Madame Nadeau, with her elegantly farm-worn hands, bears to the table a golden roast turkey; a simple salade de choux (a quick coleslaw lightly dressed in sugar, vinegar, and oil); and a spate of pint-size pates a la viande (meat pies similar to tourtieres) that have been deeply seasoned with nutmeg, cinnamon, allspice, and cloves. So fork tender are their light, lard-based crusts that each pie—accompanied by pickled beets and thick, sweet dabs of homemade red and green ketchups (the red made from ripe tomatoes; the green, from unripe ones)—is as easy to eat as candy.

The desserts that follow are a celebration of milk: an eggy white cake served with strawberry preserves and whipped cream, and another local favorite, beurree de creme avec sucre d’erable—thick slices of yeasty white bread drenched till soaking in heavy cream, then topped with crisp shards of freshly grated maple sugar. Zen-like in its simplicity, this lovely confection, a perfect counterpoint of bland and sweet, moist and crunchy, moves Monsieur Nadeau, a man of famously few outbursts, to a fit of giggles.

These dishes, both the sweet and the savory, are the backbone of Madame Nadeau’s Christmas kitchen—the rich, fortifying foods of the cold months. They owe their character to France, the mother country, and also to Britain, which established a presence in Quebec as early as 1760. Desserts—sugar pie (typically made with maple sugar) and the trifle—and sweet-and-sour condiments like the ketchups all hail from England. Cretons (a poor man’s pate of spiced pork and veal) is similar to France’s rillettes; tourtiere and soupe au pois are of French origin, too. But Madame Nadeau is quick to clarify that she considers France a distant relation, the source from which Quebec’s culture trickled before it became a thriving independent river. “We speak French, but we are not French,” she says with a sniff, and sinks her teeth into another spoonful of beurree de creme.

Like rosy cheeks and caroling, snow on Christmas Eve is a given in La Beauce. And sure enough, at 7:42 p.m. it begins—lightly at first, with tiny, glittering flakes, and then, about an hour later, more heavily, with big, puffy ones like meringues.

Inside the Morissette home, winter might as well be breathing down someone else’s neck. Dining-table details are being fine-tuned by Serge and Cyprienne’s husband, Marcel: old family flat-ware is placed beside cheery holly-rimmed china; napkins are folded into crisp diamonds. In the wood-paneled rec room, one group of kids is glued to a rousing round of marbles, another to Pokemon. An uncle takes a long-overdue snooze in an out-of-the-way armchair. And in the kitchen, Grandma Morissette’s movement continues, unflagging. In addition to the roast pork, the bagatelle, the pork-stuffed roast turkey, the pea soup, and the tourtiere, she has made ten other dishes, including feves au lard (a baked bean dish, all but sacred in La Beauce); a platter of grillades (fried bacon, liver, and crisp chips of salt pork); ramekins of cretons; and luscious, oozy maple-sugar pie—a caramel lover’s path to nirvana.

“Oh, God, please stop. Not more food!” is a common cry (a whimper, really) around the table. But this is not a negotiable menu, with dishes decided by caprice. It is a fixed artifact of Morissette tradition, as essential to the family’s life as air. Grandma Morissette’s great-great-grandmother served this menu, as will Claire’s great-great-grandchildren, even though they must assemble it without the original handwritten recipes: family legend has it that, many years back, Claire’s long-deceased grandfather inadvertently donated all the heirloom family recipes to the village dump (Claire managed to reconstruct some of them by watching her grandmother cook). “My grandmother was packing up for a move and put the recipes in a plastic bag to protect them,” Claire explains. “And poor Grandfather, thinking it was trash, made a very, very big mistake.”

Everything that follows this evening is just as it should be. From the countless hugs to the sumptuous spread to the bottles of home-brewed maple liqueur that are cracked open at meal’s end, nearly every snug, secure thing in the world seems to have convened here. Later, long after all have toasted Grandma Morissette on a job extraordinarily well done, the entire clan will crunch and fumble through knee-high snow to midnight mass at the nearby St-Georges cathedral, insulated from winter’s deep chill by the timeless warmth of family.