Dinner in the Piazza 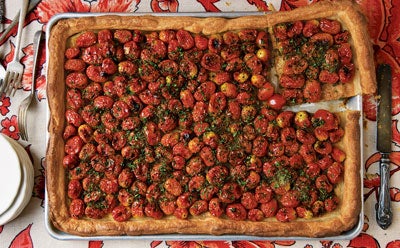 This year, for the first time, I was invited to sit on the women’s committee of Buggiano. Just as they have every year for as long as most residents of this tiny Tuscan hill town can remember, the group of a dozen or so local women met in the circolo, the little bar and social club off the main square, to plan the menu for the town’s annual grand summer dinner, known as La Cena.

At that first July meeting, as men played cards at the other tables, we talked about roast pork, which has traditionally been the Cena’s main dish. The committee members were enthusiastic about a sauce of prunes and oranges that Vanna Disperati, the robust, 60-something woman who has managed the Cena for many years, had made for them recently. It was quickly agreed that this sauce would be the perfect match for the pork. But when I showed up for the next meeting, only a week later, the decision had been made to replace that sauce with an herb stuffing. When I asked why, Miranda Vitali, another committee member, told me that the prune-and-orange-flavored roast pork was “too wintry.” Vanna confided to me later that prunes were just too expensive.

The third meeting of the women’s committee was dominated by a discussion of the antipasti. Over the years, ambitious spreads had been served—the scores of small dishes were marched out ceremoniously to a long buffet table set in the middle of the piazza, or village square—and this year the women were determined to outdo themselves, a decision heralded by the name they chose for the soon-to-be-printed menu: Buffet di Antipasti Fantasia. In the end, we came up with a list of more than 25 dishes. Several new ideas were put forward. After some spirited debate, Gabriella Arrigoni’s tuna and pickled onion crostini met with the committee’s approval. But I encountered resistance when I proposed to contribute an herbed tomato tart. “We have so much already,” said Vanna. But the others bravely stood by me, and so, for the first time since I moved to Buggiano, more than three decades ago, I was given a chance to add something to the dinner. The approval of other fare went more smoothly. Daniela Cardelli would bring a beloved bread soup, and Vanna would make her renowned maccheroni, two-inch squares of fresh pasta covered with a richly aromatic ragu. As for the desserts, we would follow long-standing tradition: almost every household in the village would supply a sweet, making for an extravagant “Fantasia di Dolci.”

Buggiano, one of many medieval fortified hilltop villages in northern Tuscany, overlooks the Valdinievole, a broad valley that encompasses some 160 square miles in the provinces of Pistoia and Firenze. It is an enticing place, snug against the Apennine foothills and partially enclosed in ancient stone walls. A weed-covered 15th-century stone portal, reminiscent of a Piranesi etching, beckons visitors into the winding streets, which lead to the medieval piazza, the village’s high point. Just down a path from the square stands the small farmhouse that my husband and I purchased 30-odd years ago. We’d bought it impulsively as a vacation home after visiting the village from our home in Jerusalem, but eventually we decided to take advantage of our “mobile” professions—my husband was a historian and biographer and I’m a food writer—and settle here for good.

Many Tuscan villages hold communal meals and sagre, outdoor festivals that celebrate the harvest of a cherished local food. In the province of Pistoia, of which Buggiano is a part, olives—frantoios, leccinos, pendolinos, and other oil-making varieties—are widely harvested, and lemons, citrons, clementines, and other citrus fruits thrive in gardens throughout the village. Such gatherings are a testament to Tuscans’ abiding attachment to the seasonal rituals that have been the foundation of rural life in the region for centuries, despite the fact that nowadays a large portion of the residents of Tuscan villages, including Buggiano, commutes to work in nearby cities.

In Buggiano, we have several communal suppers, but our Cena (the name simply means dinner) is special. It is held in the piazza, a square paved with hand-chiseled stones and bordered by a 13th-century palazzo pretorio, or town hall, and the imposing belfry of an 11th-century church. The meal is lavish, distinguished by both the abundance and the variety of its foods. The feast, which raises money for cultural events in the village, attracts dozens of visitors from neighboring towns, and over the years it has come to crystallize for me the simple joys and sensual pleasures that first drew me to this part of Tuscany.

“The dinner really cements the feeling of family,” Miranda Vitali once told me, “even for us new people.” It is telling that Miranda, a vivacious redhead in her 40s who has lived in Buggiano for ten years and grew up in a nearby town, still considers herself a newcomer to this hamlet of 130 people. Old-timers in Buggiano descend from just a few farming and artisan families and generally keep to themselves. During our first summer here, my husband and I would saunter through the tightly shuttered village every morning with our two-year-old daughter, Danae. Few people ventured outdoors during the day, and a week could go by without a neighborly conversation. After a time, though, windows would open and someone would call out a friendly “Ciao, Danae!” Everyone seemed to know our daughter’s name and that foreigners had moved into the old farmhouse below the square. The piazza was Danae’s playground, and eventually we got to know our neighbors by spending time there; we soon felt warmly welcomed.

But when it came to food—no matter that I’d written cookbooks on Italian cuisine, had reestablished an old vineyard and olive grove on our house’s property, and took pride in my culinary skills—I was suspect. “Grazie, non ti preoccupi [Thanks, but don’t bother]” was the usual reply when I volunteered to prepare food for any of the feste. I just could not be trusted with such a thing. I might help set the tables, but that was about all. So, this year, my sitting in on the planning committee meetings and being allowed to offer my herbed tomato tart felt like a rite of initiation.

By nine o’clock on the morning of the Cena, I’d already assembled my four large tomato tarts, so I decided to pay a visit to some of the other committeewomen, who were doing the final cooking and preparation for the meal—which would be attended by some 200 people—in their homes. I found Noemi Disperati, a serious-faced 64-year-old who is a cousin of Vanna’s by marriage, in her kitchen, methodically peeling and slicing a formidable pile of white button mushrooms for mushroom crostini, or toasts. A short while later I dropped in on Franca Biondi; she had just finished grinding 20 pounds of chicken liver to make the pate for her famous crostini di fegatini—the most popular and traditional version of crostini.

In Paola Canepari’s kitchen, just down the road in a restored guardhouse that still bears a Medici coat of arms over the front door, more than 200 tomatoes were resting in baking dishes. I helped Paola, a pretty brunette in her 50s, stuff the tomatoes with a mixture of bread crumbs, capers, basil, and parsley. Later, she’d take them to the village bakery, where they’d be cooked in the huge oven alongside the pork roasts.

The summer afternoon’s heat in Buggiano is intense, so no one thinks of serving a big meal in the piazza before well into evening. And it’s a good thing, because there was still plenty to do later that afternoon, even after most of the food had been prepared. At around six, Luciano Disperati, Vanna’s husband, transported the pork roasts from the bakery’s oven to the square in his three-wheeled mini pickup truck along with some of the equipment he’d need in order to help ready the piazza for the party.

I’d arrived in the square around five to help dress the dining tables with white linen tablecloths and runners made of ivy boughs. I also set out bottles of red table wine made in the nearby village of Montecarlo. Meanwhile, in several of the town hall’s rooms, the final touches were being applied to the dishes that had been carried from homes around the village. In one room, Daniela Cardelli and her husband, Vincenzo, an accomplished gardener, had just carted in an enormous tureen of Daniela’s borlotti bean and vegetable soup. In a second room awaited a mouthwatering array of cremes, nut cakes, tarts, fruits, and other desserts. Next door several women were spreading toppings on bread slices for the various kinds of crostini that would be served, as others laid out bowls of Tuscan olives sprinkled with grated lemon peel and used their hands to break hunks of Parmigiano-Reggiano into bite-size pieces. I noticed that my tomato tarts had been sliced into neat squares.

By 7:30, the piazza had been transformed. Even though I’ve attended many Cenas, the sight never ceases to move me, rekindling a sense of communion with this singular place. Strings of cheerful white lights dangled over the square, and a feeling of anticipation pervaded the air. I raced home to clean up and change my clothes. When I returned, at around eight, guests were arriving in the gathering dusk; they milled about, sipping glasses of prosecco and snacking on puff pastry antipasti that the committee member Gabriella Meoni had made. Alessandro Vezzani, a musician who lives in a nearby town, had set up an electronic keyboard and was playing jaunty tunes. Everywhere I looked, old friends were embracing and admiring the beautiful piazza. All the guests had paid to attend the dinner, and yet the gathering had the feel of a giant family reunion.

As soon as everyone was seated and Giancarlo Panconesi, the president of the village’s cultural association, had given a short speech, Alessandro struck up a triumphal march. At that moment, we committeewomen made our grand entry into the square, each bearing a tray of antipasti and setting it on the buffet table. Amid lots of oohs and aahs, the great rush to the buffet was on. Plates were filled and then filled again. Guests ate with gusto, and I marveled at the power of this simple, homemade food to bring so many people together, to cheer and energize them.

Finally, when we deemed the antipasti course to be finished, the other committeewomen and I leapt up to clear away the plates. The next course came out a bit more quietly than the first: tureens of bread soup and plates of Vanna’s maccheroni. They were the perfect prelude to the pork roasts, which had been carved in the town hall just minutes earlier. The meat was redolent of herbs and garlic. Roasted potatoes, the baked tomatoes, and big bowls of mixed-greens salad were placed on the table alongside the pork.

A contented, chatty calm fell over the crowd after the main courses had been cleared away and the desserts were readied. Finally, well after ten o’clock, the Fantasia di Dolci was paraded out to a round of applause. Amid the scores of gorgeous fruits and sweets, my favorite was Gabriella Meoni’s delicious pear and nut tart. And though I could not have imagined such a thing was possible after beholding the spread of rich sweets, the desserts were all eaten. Not a spoonful remained in any of the serving dishes. Glasses of homemade limoncello—a lemon liqueur that is a village specialty—were poured as some of the men moved the buffet table to make room for dancing, which lasted well into the night.

Tired as I was, I danced too, happy with my success at this year’s Cena. I hadn’t failed to notice that, of all the antipasti, my tomato tarts had been among the first to disappear.