Food in the Shinto Spirit 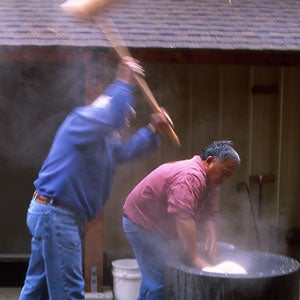 I wound through the valley of Rancho Santa Fe one chilly, foggy morning late last December, as the skies were turning that California-dawn palette of periwinkle and pink, toward Chino Nojo, the Chino family’s farm. The Chinos are four siblings who have achieved a near-cultlike fame for growing perhaps the finest fruits and vegetables that can possibly be grown on their 50-acre plot just north of San Diego. I was headed there to take part in their annual mochi-tsuki, a Shinto celebration that begins the period of the New Year—and which, Tom Chino says, is an important part of life on this farm.

I parked and walked behind the Chinos’ farm stand, officially (although rarely) called the Vegetable Shop, to a group of four simple structures, painted a muted, mustardy yellow and positioned around a courtyard in a formation that, in its simplicity and grace, looked entirely Japanese. Kay, Fred, and Frank Chino all live here. Hideo lives in San Diego with his wife, Sheridan Reed, and their two children, and although not involved with the business of the farm, he often stops by to visit. Tom lives nearby with his wife, Nina McConnel, and their 12-year-old son, Makoto, and arrives at the farm at 4 a.m. seven days a week, 52 weeks a year.

I found the family in the courtyard, huddled around a fire in a galvanized tub over which flats of soaked rice were stacked, giving off the smells of sweet rice and redwood as they steamed. Makoto was sent to wake up “Alice”, as she’s known here—Alice Waters, of Chez Panisse. When Alice, sporting a purple knit beanie, arrived from the room the Chinos keep for her, Tom dumped the contents of the bottommost flat into the giant granite mortar, or usu, that sits permanently in the center of the courtyard, then handed Alice a long, heavy mallet called a kine. She lifted it up over her shoulder, swung it down onto the rice, and almost came down herself with the force of it. The group clapped. And the mochi-tsuki had begun.

When Hatsuyo and Junzo Chino bought this farm in 1952, they did not set out to grow famous vegetables. Even now, their children don’t claim that their produce is the best. “But what we present to our customers,” Tom does say, “is the best we can produce.” The family humbly went about growing their museum-quality vegetables in obscurity until the late ’70s, when a box of their green beans made its way 500 miles north to Berkeley and into the hands and mouth of the American chef most likely to get excited about a green bean. To this day Alice Waters recalls the moment wistfully. “They were straight little haricots verts,” she says. “Just like the ones I had eaten in France…and delicious. It was love at first sight.”

I grew up in San Diego, and in the 15 years since a friend first took me to the Chinos’ as if it were a rite of passage, I’ve made a pilgrimage there every time I’m in town. It takes only one trip to the stand to see that something special is going on. The Chinos grow vegetables in shapes and colors that make you question what you’re seeing: red and white carrots; a large cluster of light green turrets that turn out to be romanesco cauliflower. What’s more, because of the Chinos’ extensive knowledge and the total devotion with which they raise these things, even ordinary varieties of broccoli and radishes and squash look uncommonly fresh, dewy, and bright.

The Chinos have a reputation with customers for being distant and, well, not particularly friendly. (“We’re not effusive,” Tom admits. “We’re Japanese.”) They are modest and matter-of-fact and seem somehow detached from the outside world, as if they were deeply connected to something not readily accessible to the rest of us. The mochi-tsuki offers the Chinos a chance to share that part of themselves with their friends. It also allows them to carry on a tradition they inherited from their parents, as they did so much of what defines them—and, in so doing, to keep their parents’ spirits alive. (Hatsuyo died in 1990, Junzo a year later.) For me to be included in the celebration, well, that’s what I call pure mochi-tsuki luck.

Mochi-tsuki literally means making mochi and refers to the continuous pounding of steamed glutinous rice to form a dough and the shaping of that dough into tender cakes, often filled with sweetened adzuki bean paste, called mochi. According to Shinto belief, making mochi invites the kami, or gods and spirits, to visit. (Kami may reside in natural phenomena, such as a mountain or a stream, or in extraordinary human beings—including, historically, Japan’s emperors.) The mochi themselves are thought to contain the presence of the kami; they also represent perfection and purity and are believed to imbue the eater with these qualities. Mochi are eaten during the first week of the New Year, often grilled or broiled or served in a vegetable soup called ozoni, a traditional New Year’s Day breakfast. Large mochi are placed on household shrines as an offering to the kami.

Because making mochi is so labor-intensive, few people do it at home, even in Japan; instead, they go to mochi-tsuki parties like the Chinos’—or, truth to tell, buy their mochi premade or make it with an electronic machine. There’s even microwavable mochi. Given enough shortcuts, Tom says flatly, “the spirituality can be completely eliminated”.

I’ve rarely, if ever, heard the Chinos talk about Shintoism, maybe because for them it would be like talking about the earth’s being round. Shintoism is really more of an expression of cultural identity than it is a religion. It has no scriptures or explicit moral code; just a worldview expressed by gratitude to the spirits and ancestors, a love of purity, and a deep appreciation for the beauty and power of nature. Shintoism’s raison d’etre is the celebration and enrichment of life, and nowhere is this more apparent than at the Chinos’ mochi-tsuki.

On the day before last year’s mochi-tsuki, Kay and Nina, along with two family friends and me, spent the entire day in the kitchen, a freestanding building with a sliding glass door that opens onto acres of vegetables on one side and to the courtyard on another. Trey Foshee, of George’s at the Cove in La Jolla, and his former sous-chef, A. J. Voytko, of Chive in San Diego, came to slice meat and fish for the nearly 600 kushi-age (“fried sticks”) that we would make: beef rolled around scallions, shrimp stuffed with slivered ginger, baby artichokes, hard-cooked quail eggs—each so delicate and pretty that it looked like a long-stemmed lollipop. Meanwhile, Tom and Fred and a few employees and interns moved furniture, picked debris out of the rock gardens, and hosed down every last surface, from benches to beams. Hideo and Sheridan arrived to help rice potatoes for making buns that would be filled with mirin-and-soy-flavored shrimp. When I left, at 8 p.m., they were still going.

After Alice’s inaugural swing of the kine, she passed it to Fred, who brought the mallet down on the sticky rice with a confident thud—and then we all took turns pounding the rice, slowly transforming it into a luminous round. Between each drop of the mallet, Tom would dart in, fold the rice over, and punch it to mark the site of the next pound so that the rice would be evenly mashed; then he’d pull back, his head just avoiding the descending mallet. The thump of the mallet and Tom’s punching, which he did for hour after hour, formed a rhythm that became the heartbeat of the entire day.

By noon, the guests had all arrived, including some prominent people in the American food community—Nancy Silverton and her husband, Mark Peel, of La Brea Bakery and Campanile; Vogue columnist Jeffrey Steingarten (Wolfgang Puck, who usually comes, happened to be away)—but, here, just friends of the Chinos. As soon as each mound of dough formed, it was whisked away to a big wooden table, where a mass of us stood in anticipation. Hideo pinched small pieces off the mound and handed them out. Alice showed me how to flatten a piece in the palm of one hand with the thumb of the other: “If it doesn’t burn your hand, you’re not doing it right.” We topped each disk with sweet bean paste and then pinched the warm mochi closed. Those we didn’t pop into our mouths we lined up in one tray after another until late afternoon.

Throughout the day, we stopped to enjoy the feast that the Chinos offered, including the kushi-age, which had been dipped in egg and panko bread crumbs and fried till golden, and impeccable sushi from Taka Sushi in San Diego, whose staff also made a salad of vibrant Chino-grown greens. A man with wild bluish hair and blue-lensed, silver-rimmed glasses—a Beverly Hills hairstylist named Hiroshi Kitamura, whom the Chinos met when one of their friends sent him to cut the family’s hair—enthusiastically hawked his own hot, brothy Japanese dote-nabe and shabu-shabu, both meals in a pot. And Kay and Nina walked through the crowd, handing out bowls of simmered daikon with miso sauce, along with the shrimp-stuffed potato buns, each topped with baby Chino spinach.

As we made mochi and ate and talked, at least a few of us began to notice the way the Chinos’ worldview becomes contagious when you’re in their presence. You start to think a little like them, or at least you think you’re thinking like them. I began contemplating moving home to be closer to my family, who still live in San Diego. Another guest remarked on how even the commonest things in the compound, like gardening tools, are arranged so that they look like a shrine. And I realized that at the heart and in the seed of every Chino vegetable is everything the Chinos are and do and believe.