Iowa's tenderloin sandwich is bliss on a bun 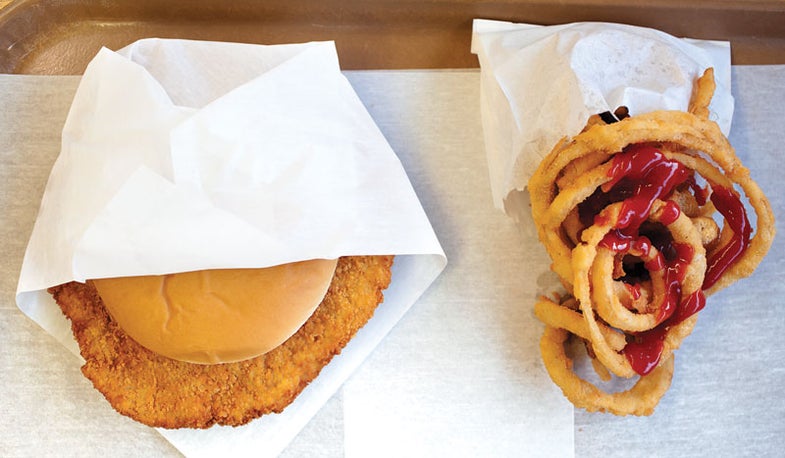 Of pork products that make Iowans proud, the tenderloin is king. We don’t mean a roast that requires marinade or seasonings, then gets carved, plated, and eaten with knife and fork; in Iowa the tenderloin is a sandwich. Sometimes abbreviated to BPT for “breaded pork tenderloin,” it consists of a trimmed and pounded-tender slice of pork loin that is battered, fried, and sandwiched in a roll along with pickle chips, raw onion, ketchup, and mustard. (It’s not a schnitzel because it’s deep-fried rather than pan-cooked, and is always served on a bun.) You’ll find BPTs at cafes, diners, drive-ins, and eat-shacks that earn partisans because they serve the juiciest or the widest.

Why Iowa for such a thing? A stroll through the spectacularly large Swine Barn at the annual State Fair helps explain the local passion for pork. Here you’ll learn that pork production adds $2.5 billion to the state’s economy and that one out of three hogs raised in America is Iowan. Indiana actually lays claim to having invented the BPT—at Nick’s Kitchen in Huntington, in 1904—but nowhere is the tenderloin more exalted than in Iowa, especially in the farmlands of the western part of the state, where hogs’ favorite food, corn, grows especially high.

Some BPTs, particularly those made in and around Des Moines, flaunt a disk of fried pork as wide as a dinner plate, making its placement between the top and bottom of a standard hamburger bun comical. The Original King Tenderloin, served since 1952 at Smitty’s, just minutes from the airport, is too broad to be hoisted by the bun in any normal way—even by a person with abnormally long fingers—but it is thin enough to tear off and eat pieces of the circumference until the bun is reachable. Twice breaded with cracker meal procured in Chicago, and then deep-fried in soybean oil (“for the flavor,” says third-generation chef Ben Smith), Smitty’s tenderloin is all about the crunch that envelops the slim layer of juicy pork.

Mr. Bibbs Tenderloins, a stark, open-kitchen sandwich shop in Des Moines’s Highland Park neighborhood, serves its own double-wide, centimeter-thin ‘loin fully accoutred (if you order it “deluxe”) with ketchup, mustard, pickles, sliced tomatoes, lettuce, and onions. Essential companion: lushly crusted onion rings. We happened to eat our tenderloins at 10 a.m. on the first day of classes at nearby North High School, since proprietor Kathy Essex fretted that, by noon, her tiny establishment would be overwhelmed with students who come for sandwiches and extra-thick chocolate malts. At B&B Grocery, just a few miles away, we ate insanely wide tenderloins alongside lunching local police officers who took great delight in demonstrating how to fold the meat over once or even twice inside the bun to make it easier to handle.

The following day we ventured an hour west to what many connoisseurs consider the heart of tenderloin country. Here in Audubon and Cass counties, the cutlet is significantly thicker and therefore juicier and porkier; some sandwiches overhang their bun, but few are silly-wide. At the Farmer’s Kitchen, co-owner Charlene Johnson’s fried pork is plump and succulent, merely haloed by a buttermilk-tinged, seasoned breading. At the Chatterbox Cafe in Audubon, Samantha Goetz took our order, cooked it, and delivered a piping-hot slab of sweet pork with an especially gnarled crust, the sandwich sided by a heap of pickle chips and topped with a thick slice of white onion. Samantha also gave us the lowdown on the restaurant’s rather goofy signature item, the “hamburloin”—a burger atop a tenderloin in a single bun. She was joined in her regional-food discourse by various men and women from other tables, all of whom treat this place as a second home, pouring their own coffee when they need refills or when they come between meals to chat with friends.

From the outside, Darrell’s Place in Hamlin looks more like a crop-duster hangar than a notable restaurant. The interior is all beer signs and bare Formica. And the tenderloin, made in the thick-patty style, is magnificent. Winner of the first annual Iowa Pork Producers Association Award in 2003, this sandwich sports a wavy, thousand-faceted bread crumb crust that hugs a luscious lode of pork. And by the way, Darrell’s rhubarb pie, made using stalks secured from customers’ patches, is peerless in a state famous for its pie: piled into a master-class crust, its tantalizing sugar-tart filling is balanced by the cascade of soft-serve vanilla ice cream that is its traditional garnish.

Just south of Audubon, in Exira, we had what might be our favorite Iowa tenderloin at a low-slung eatery with four tables called Red Barn. Costing $3.60, it is super wide but also mighty thick, really juicy and snug inside a savory crust, garnished with pickles and onions. The tenderloin is just one item on an exemplary Hawkeye State menu that also includes pea salad with shredded cheese bound in Miracle Whip, a lovely loosemeats sandwich special made of spiced minced beef and onion, and nutmeg-dusted vanilla custard.

By 11:45 a.m., every seat in the Red Barn was occupied and we were sharing our table with four strangers. Whereas habitues may linger when they come for coffee midmorning or in the afternoon, country-cafe courtesy at mealtime demands freeing up a seat as soon as one has finished eating. We quickly polished off dessert and paid our check, worrying all the while that we had appropriated two seats from a rotation of customers that rarely includes anyone from out of town.