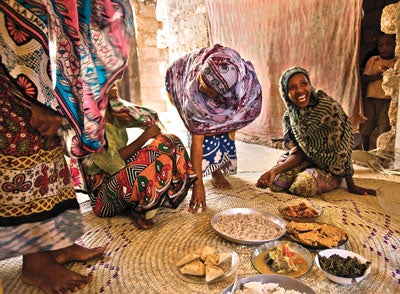 In the Old Town of Mombasa, Kenya, the call to prayer comes before dawn. Soon after, the dusty lanes of this port city awaken with delivery carts and fishmongers; along the waterfront, white-robed men in patterned caps gossip over endless cups of spiced coffee and mandazi, cardamom-scented fritters. Women in brightly colored headscarves sell fried-lentil bhajia and roasted cassava sprinkled with chile powder to uniformed schoolchildren. At makeshift sidewalk restaurants, chunks of barracuda sizzle atop oiled griddles. Later, as the noonday heat grows unbearable, the people of Mombasa retreat into shade.

I find shelter behind twin blue doors in an alleyway, at the home of Lela Abdulaziz, whose family owns several fruit and vegetable stalls in the city’s main market. I struck up a conversation with her earlier this morning, while buying black Zanzibar peppercorns from her father. On hearing that I’d come to Mombasa to learn about the foods eaten here, she invited me for lunch—my first taste of home cooking in this part of East Africa, a region knit together by a complex skein of linguistic and religious kinship that constitutes Swahili culture. In her foyer, Lela sheds her bui-bui, the black robe and head covering worn by many Swahili women, and begins preparing the meal. First, she unfolds a low wooden stool that has a serrated blade affixed to one end. She sits, a half coconut gripped in her hennaed hands, and grates the white meat against the blade into a fired-clay bowl. Then she stuffs handful after handful of shredded coconut into a woven-palm-frond strainer called a kifumbu. I watch as she pours in a cup of water and squeezes the kifumbu to extract the coconut’s rich, thick milk, which she stirs into a chicken stew, called kuku wa nazi, that has been simmering in a pot on a charcoal brazier.

I hear the slap of rubber slippers on the path outside; Lela’s brother Ahmed Athman has returned from the market. A short man with amber eyes, he casts off his shoes at the entrance and sets down bags of chiles, a jar of tamarind paste, a sack of basmati rice, and packets of turmeric and cloves—staples along the Kenyan coast since seafarers from the Arabian Peninsula and India first landed in Mombasa centuries ago. Ahmed unwraps a whole white snapper, which he cleans and then marinates with lime juice and chiles for a dish called samaki wa kupaka. A short while later, Lela places the fish over the fire and bastes it with a sauce made from garlic and tamarind.

When the fish is seared on both sides, we carry platters across the foyer to a breeze-cooled living room. Seated on the floor next to me, Lela deftly scoops up some of the stew with a ball of the clove-infused basmati rice. “Eating this way, you enjoy the taste of the food,” she says softly. With my right hand, I pluck off a flaky piece of the snapper and pop it into my mouth. I relish the heat of the chiles and the lingering notes of coriander and ginger in the snapper’s firm flesh. Later, when I dream of Africa, it will be of this fish flavored just so.

The next day, I leave Mombasa behind, flying north along the coast that Arab traders have always called sahel—the word from which Swahili is derived—and taking a ferry to the mangrove-fringed island of Lamu. There, I’ve been told, cooks hew faithfully to traditional Swahili cooking, with its Arabic-inflected dishes, so distinct from the austere food of pastoral inland Kenya. Stepping onto the Lamu Town pier, which is piled with sacks of rice and cases of ginger-soda bottles, I make my way along the waterfront, lined with wooden sailing dhows, to meet Fateema Adnan, who was introduced by a friend in Nairobi and has offered to cook with me. She finds me sitting on a bench, easily spotting the unveiled foreigner in a crowd of women swathed in swirling chiffon. Tall and slim, Fateema leads me along sandy paths lined with coconut palms until we reach a coral-stone house in a fishing village nearby.

In the common room, Fateema introduces me to her mother-in-law, Rahamah, a lively woman clad in boldly printed kanga cloth, and to Rahamah’s husband, Mohamed, a fisherman who is seated on the pounded-dirt floor weaving palm fronds into a round mat. Rahamah’s grandchildren tumble in the doorway shouting “jambo [hello]!” It takes us much of the morning to grind rice into flour and roll it between our hands to make couscous, which we’ll simmer in coconut milk.

When Rahamah and Fateema have finished cooking, they sit down on one of the room’s two wooden settees and show me how to twist kanga cloth into graceful head wraps. Then Mohamed spreads clean palm mats on the floor, signaling that it’s time to eat, and I realize that he has woven them especially for my visit. We wash our hands in bowls of cool water drawn from the village well.

I taste the couscous; the sticky, coconut-infused beads are sweet, and suited to sopping up the mackerel stew the women have cooked. Rahamah has also made samaki wa kupaka, and her grilled snapper is coated in an onion-tomato marinade that is less fiery than Lela Abdulaziz’s version; it calls to mind a creamy kurma from India, an ocean away. The meal’s centerpiece is kuku wa rojo, sauteed pieces of chicken smothered in curry gravy. Faintly redolent of the smoke from the coconut-husk cook fire, the meat is lean and gamey, a special treat for frugal Swahili fishermen, and the family’s generosity is not lost on me.

After the meal, Rahamah gives me a spice basket she has fashioned from palm fronds and places her hand over her heart, repeating the word rafiki, Kiswahili for friend, several times. I am reluctant to leave. Then she dons her bui-bui, and only her brown eyes remain visible. I follow her outside, and we make our way on foot back to Lamu Town. Reaching the waterfront, we walk side by side a while longer, jostled by the crowd of early-evening shoppers. Momentarily distracted, I turn my head. Just as quickly, I look back again, to find that I have lost her in a sea of veils.