Why Switzerland's Gruyère-filled malakoff is a secret worth sharing 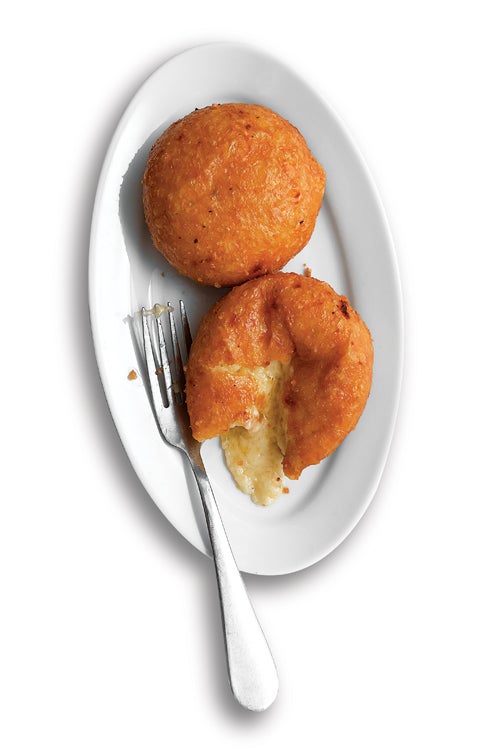 Like the hordes of diners crowded around the tables at Au Coeur de la Côte, a rustic restaurant with a wood-beamed ceiling in the picturesque village of Vinzel in western Switzerland, my friend Caroline and I have skipped breakfast. That way we can do full justice at lunchtime to the malakoff, a Vinzel specialty and arguably Switzerland’s best-kept culinary secret.

Golden cheese-filled domes, malakoffs start with grated Gruyère that’s often seasoned with nutmeg, white wine, and kirsch, a sour cherry-flavored brandy, then mixed into a batter with eggs and flour, mounded onto rounds of white bread, and deep-fried. Cradled by the bread and crusted by the hot oil into an inverted teacup shape, the malakoff is a fritter of fondue; it’s a beignet of raclette. But unlike those more high-profile cousins, it is not easy to find, even in its native Switzerland. Lucky for me, Au Coeur de la Côte, which serves the country’s best rendition of the malakoff, is only a 30-kilometer drive from my hometown of Geneva. So every summer, when I visit, I grab a friend and head for the cheesy treat.

Over a bottle of chilled chasselas—a steely aperitif wine made from grapes that grow in the restaurant’s own vineyards—and a bowl of crisp greens dressed in a creamy sauce maison, we sit in anticipation of our first steaming malakoff.

There are all sorts of tales about malakoffs’ beginnings, but the most likely explanation I’ve found is that they were brought back to the Vinzel area by Swiss mercenaries who, in 1855, fought against the Russians alongside French and British troops to capture the Malakoff Tower in what is present-day Ukraine, during the Crimean War. Those mercenaries were often fed deep-fried strips of cheese, a military camp snack they took home with them to Vinzel and surrounding villages. The recipe would undergo some minor changes by the late 1800s—morphing from strips of cheese to fritters—when area restaurants started offering malakoffs on their menus.

Though I have eaten malakoffs many times before, the first crunch of crispy exterior and its subsequent surrender to the gooey, winey Gruyère are as unexpected as they were the very first time I devoured one.

Though I’ve eaten good versions of malakoffs elsewhere, I pine for Au Coeur de la Côte’s all year long. When I ask owner Philip Wolfsteiner what makes his so exemplary, he is cagey. “It’s a well-guarded fourth-generation secret,” he says, laughing, though he hints that the cheese, which has been furnished by the same supplier since the restaurant first opened in 1896, should be “neither too salty nor too mild.”

Caroline and I eat our first round of malakoffs along with a couple of tart cornichons, pickled onions, and a bit of strong mustard to cut the richness. Then we refill our glasses and wait for round two. As we do, we take in the atmosphere of this place, its vibe as convivial as a fondue party. All around us old friends are catching up with each other, discussing jobs, children, and dreams that didn’t happen but may still come true. I notice how, after gobbling up one malakoff, and then a second, they debate, as Caroline and I do, whether to have a third, or even a fourth. Eventually, after more wine and some cajoling from Wolfsteiner, the decision is made with a joyful “Why not?”

Once we can’t possibly eat another, Wolfsteiner insists we stick around for dessert. His recommendation: cerises à l’eau de vie, locally grown cherries soaked in liqueur. Light and mildly sweet, they are the perfect counterpoint to our heavy main course. But as we leave the restaurant and step out into the warm air, we realize they have cleansed our palates perhaps too much. Right away we start pining for next year, when our annual pilgrimage for malakoffs will take place again.

See the recipe for _Malakoffs »