The Star of Siam: Thai Curries

True Thai curries are more than the sum of their parts 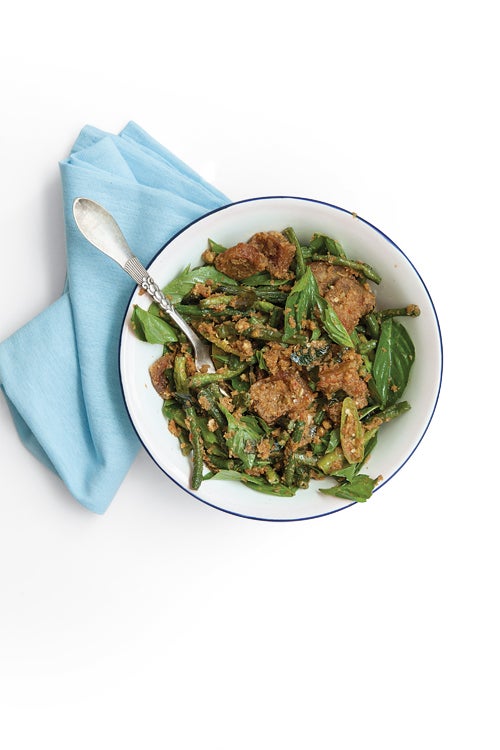 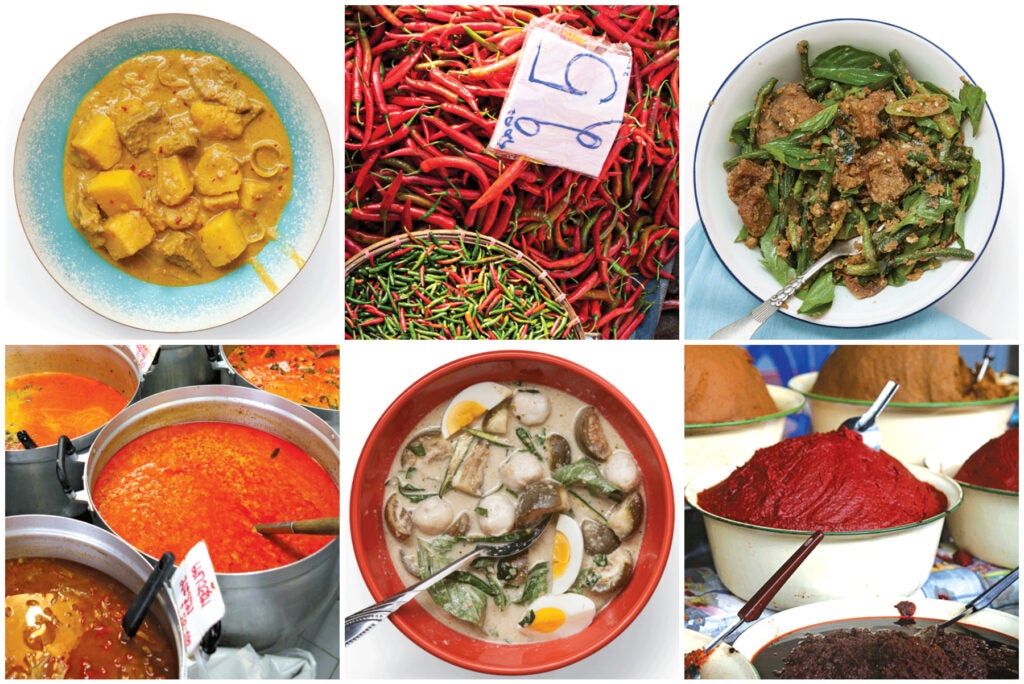 When I first went to Thailand in the 1980s, I found out that curries there aren’t at all like the heavy, busy ones I knew from Thai restaurants in the U.S. In Thailand, curries are far more diverse; there are scores of regional versions. And there are classic curries like the ones in the following recipes—sour curry, tart with tamarind; coconut milk—enriched yellow curry, and green curry blazing with fresh chiles; fiery red curry that’s sometimes cooked dry, almost like a stir-fry. Thai curries might be hot, but they are balanced, with sweet, tangy, pungent, and aromatic notes. They’re also more spare because they’re not meant to be one-pot meals. Rather, they’re the sauce that flavors rice. But what a sauce it is. The Thai call curries kaeng, which refers to foods that start with a paste, a smooth-ground, fragrant mixture of chiles, rhizomes, shrimp paste, herbs, and spices. The ingredients might seem disparate, but when you make one of the curries in these recipes, you discover that, through careful cooking, they come together into something delicious. It’s not really difficult to make curries from scratch, but it takes patience. In Thai Buddhism, there’s a word, sati. It means mindfulness. That’s what making a curry takes. 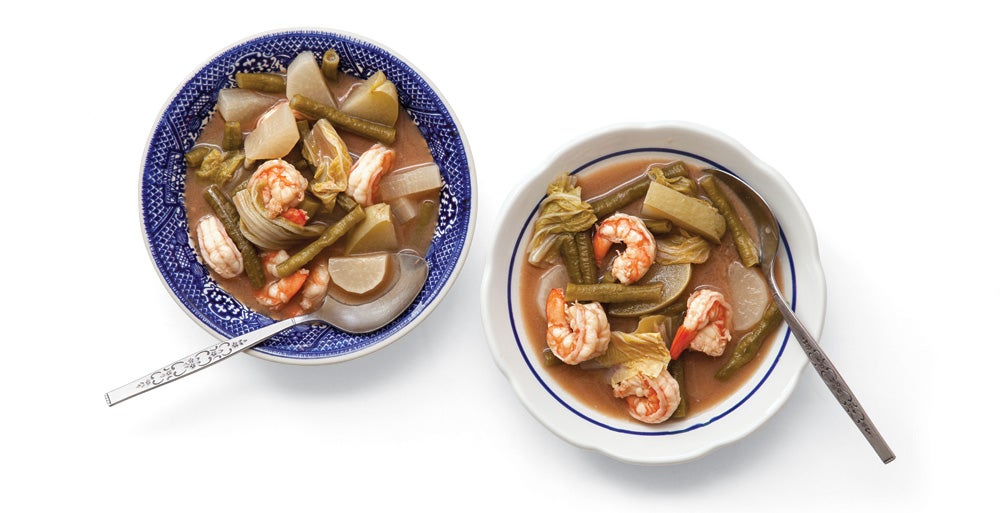 Curries aren’t always creamy with coconut, and curry paste isn’t always fried. One of the most common curries cooked in Thai homes, restaurants, and markets is kaeng som, a quick soup with a clean, sour flavor and absolutely no coconut or oil. The central Thai version in this recipe is made with nice big shrimp, and it’s soured with concentrated tamarind juice. But I’ve tasted lots of variations on this curry, including ones soured with lemon or lime, and I’ve never had one I didn’t like. Light, tangy, and cooked with a modest amount of heat and any available seafood and fresh vegetables, kaeng som is an elemental and satisfying dish, and it’s an easy curry to master. This recipe kicks off with a basic paste enriched with raw shrimp and shrimp paste to boost its umami depth and add body to the simmering broth. Learning to make that broth, which leads with tart, pungent flavors but also delivers measured amounts of sweetness, salt, and spice, helps you understand the balance in Thai cooking. 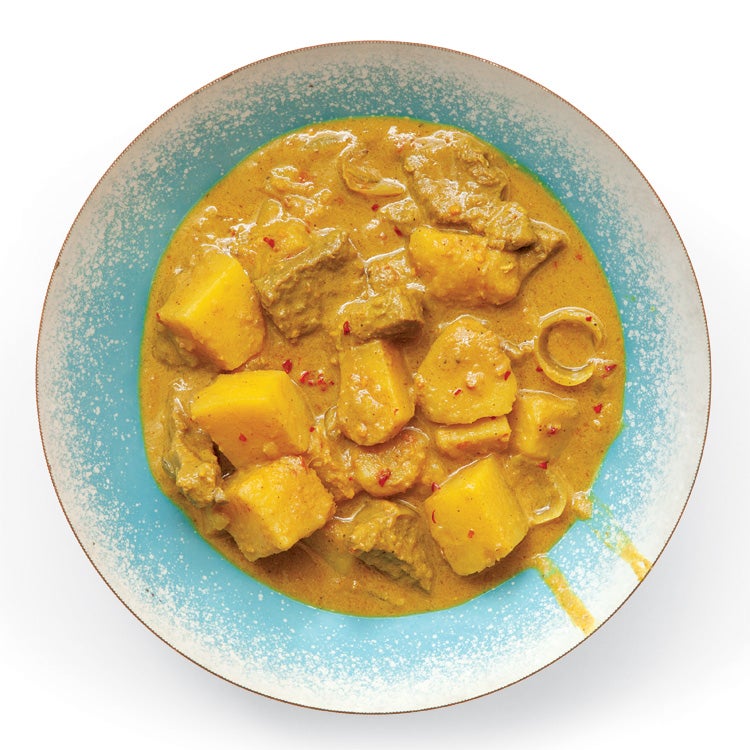 To the Thai,_ kàrìi_ means “curry powder,” an ingredient not usually found in Thai cooking. Curry powder and other dried spices like turmeric traveled to Thailand along the spice route. The dried spices in this complex, coconut-enriched curry reveal the recipe’s South Asian origins. Thai cooks like to experiment. Over the centuries, they’ve absorbed Indian spices, Chinese techniques, and Western ingredients like chiles. At Pok Pok, my restaurants in Portland, Oregon, and New York City, we care about accuracy, but we’re not slavish about it. For instance, this recipe calls for beef chuck; it’s more tender than the cuts of beef Thai cooks might use, and in proportion to the sauce, we’d serve a lot more of the meat than the Thai ever would. These are some ways that we make the recipes our own, which is totally in the spirit of Thai cooking. An approach like this teaches you about the food; you start to understand what happens if you add ten chiles instead of five, more palm sugar or less. So here’s my advice: Follow the recipe exactly the first time, then adjust the seasonings and the coconut milk. Put your stamp on it. After all, that’s what the Thai do. 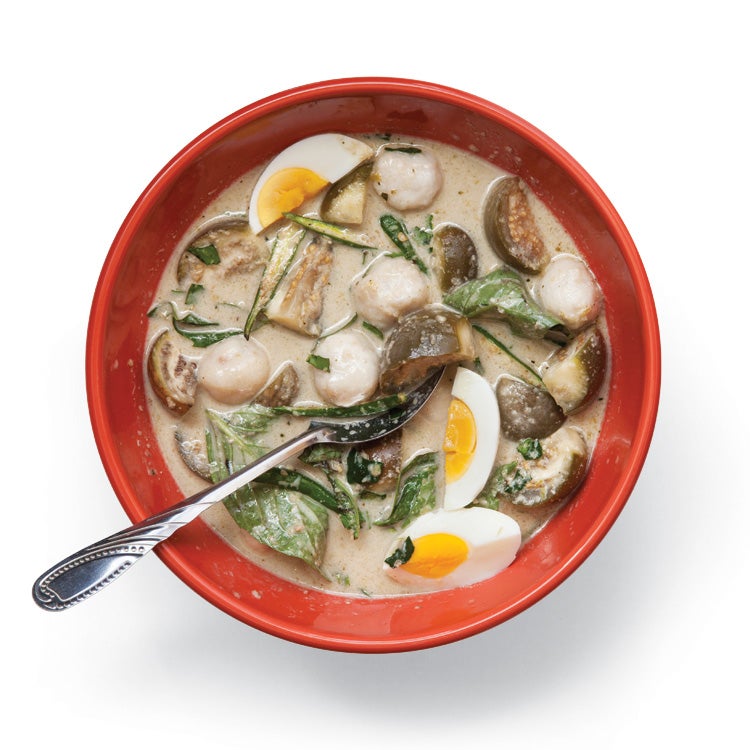 Every region of Thailand has its version of kaeng khiaw, or green curry. On my first trip to the south, I ordered a green chicken curry that was so spicy, I initially had trouble eating it. But I also couldn’t stop myself. It was creamy with coconut, fragrant with basil and lime leaf; I had never tasted anything so darned hot and yet so good. Then I realized that at the bottom of the bowl were half a dozen sliced green chiles, their heat fresh and potent. The dish gets its name from these intense little peppers, which get incorporated into the paste. In the south, where food is particularly spicy, fistfuls of them go into the finished dish. But green curry actually originated in central Thailand, where it’s just as luscious and aromatic but milder. There you’ll likely see it made with fish balls—these Thai-style dumplings add a nice, bouncy texture to the dish. You can make your own, which isn’t hard, or buy fresh or frozen fish balls from an Asian grocery. 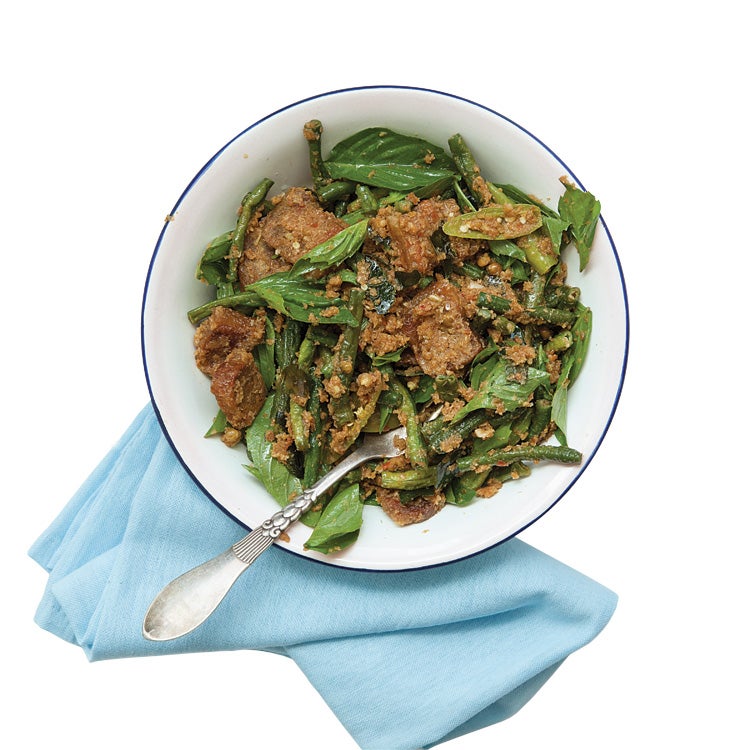 In rural Thailand kids learn how to make curry paste at a young age, sitting on the ground with their legs wrapped around the mortar and pestle. My friend Sunny Chailert, who taught me much of what I know about Thai cooking, told me that his mom never said, “Here’s how to do it.” She’d just say, “Make the curry paste.” He’d do it and fail, do it and fail, until she liked it. This recipe, adapted from one in David Thompson’s Thai Food (Ten Speed Press, 2002), benefits from that kind of attention. It belongs to a category of curries called phat phrik khing, “dry curry”; it’s caramelized in pork fat rather than cracked coconut cream, and there’s no coconut milk added to make a gravy. This means it’s all about the paste, bright red and blistering from a load of dried chiles. Without coconut to soften them out, the flavors of the paste—citrusy lemongrass, gingery krachai, briny shrimp—are more pronounced. Beginning with a fresh, well-balanced paste, and then paying close attention so it doesn’t burn, are definitely key. And while American cooks might find it counterintuitive to plunge pork belly into hot water, boiling and then browning the fatty meat gives it an excellent texture: crispy outside, soft within.