Indonesia's peanut-sauced gado-gado satisfies even the heartiest of appetites 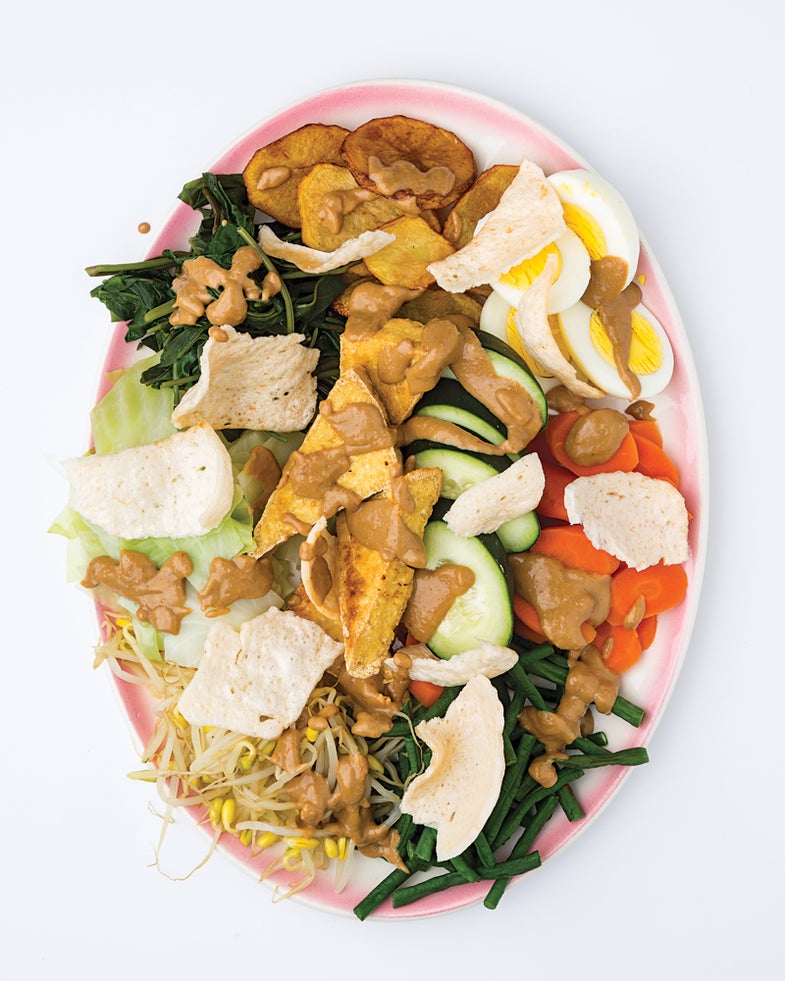 It was gamelan music that woke me from my sleep, but it was the gado-gado that awoke my palate. One night back in the early 1980s, while I was staying with friends in Jakarta, the rhythmic strains of an Indonesian band of xylophones, gongs, and cymbals beat in through my darkened window. Curious, I rose from bed and went out to the back alley, where a group of transvestite performers—one of many such roving troupes called banci—were executing an exquisite West Javanese dance. They were performing for loose change, which I gave them, along with friendship, and one night, while they were still encamped nearby, they invited me to dinner. Beside the fire, we ate a meal of such intricacy and flavor, it was even more thrilling than the dance. This was my introduction to gado-gado, a dish I have loved ever since.

Gado-gado, Indonesian for “potpourri,” truly lives up to its name. It’s a salad, but a monumental one: a kitchen-sink assemblage of raw, blanched, and fried vegetables—carrots and cucumbers and shredded cabbage; long or green beans, spinach, and bean sprouts; even potatoes. Hard-cooked eggs, along with fried tempeh or tofu, lend protein. Lontong, white rice steamed in a shaft of bamboo and sliced into thick green-tinged disks, is loaded on for substance. Krupuk, puffy fried chips flavored with dried shrimp or bitter melinjo seeds, add crunch.

But the pièce de résistance of gado-gado is the ambrosia-like sauce. A dressing of fresh-roasted peanuts, it bespeaks the historical importance of Jakarta as a trade center. The nuts, a 16th-century Portuguese and Spanish import from the Americas, get blended with chiles, garlic, palm sugar and vinegar, coconut milk, and shrimp paste to make a spicy, pungent concoction, whose main ingredient gives it smoky-sweet depth. More complex, and also lighter, than the knock-off peanut sauces found at Westernized Thai restaurants in the States, it is a staple, also used for dipping the grilled skewers called sate, that shows off the sophistication of Indonesian cooking. Atop the melange that makes up gado-gado, it shines.

There are many variations of gado-gado in Indonesia. The dish originates in Western Java, where Jakarta is located, and it benefits from the abundance of fresh produce in that agricultural region. At streetside pushcarts there, diners choose from a veritable salad bar of ingredients, assembled to their liking and dressed on the spot. Karedok is a version made entirely of raw vegetables and aromatics; ketoprak includes vermicelli-like noodles (see “All in the Sauce,” below).

At home in Manhattan, I make my gado-gado with the works, stopping at the nearby farmers’ market and loading up on whatever looks good. When my American friends ask me why I’m so compelled by Indonesian food, I tell them about this triumphant dish, and then I invite them over for a taste. At first they’re skeptical: With its hodgepodge of ingredients, gado-gado sounds like it wouldn’t work. But then they eat it, and they experience, as I did years ago in Jakarta, the music of this dish, as its flavors and textures so deliciously coalesce.

All in the Sauce

See the recipe for gado-gado »