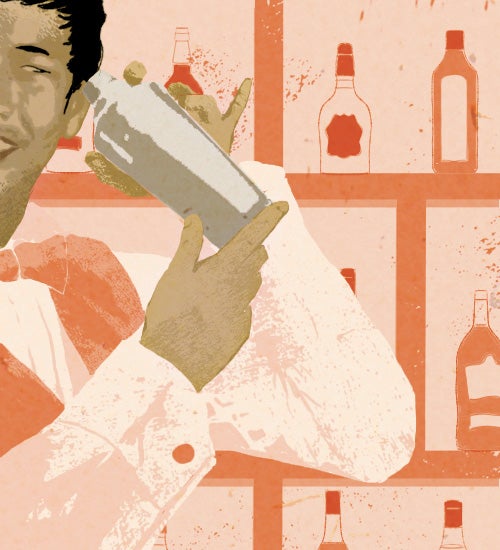 The mai tai at Dragon 88, a scruffy suburban Chinese restaurant an hour west of Boston, is the color of tea. It’s served over crushed ice, a plastic skewer spearing maraschino cherries and pineapple chunks emerging from a fine white froth on its top. Like all the best tiki drinks, this one possesses a flavor that is hard to place: fruity, tangy, tart, and boozy all at once. And while it’s still the middle of the afternoon, well ahead of cocktail hour, no one at Dragon 88’s battered wooden bar is drinking anything else.

When someone orders one, the bartender shouts “Yessssuh!” like a native-born Massachusettsian—though his name is Dave Chow and he’s from Myanmar—and he dips a ladle into a vat filled with golden liquid. He decants the concoction into an ice-filled mixing glass, tosses in a slice of lime, pops a Boston shaker over the top, and shakes with a curious delicacy: pinkie in the air, head cocked toward the glass, as if listening to a whispering child.

The 88 in the restaurant’s name refers to the year Dave Chow opened it. He had come to the U.S. 15 years before and perfected his mai tai while working at another area restaurant called Honolulu. He won’t share his recipe, and after drinking quite a few over pupu platters with my husband, Amol, I can say with confidence only that it’s got plenty of rum. That’s fine because we’re here to feel at home again, though we haven’t lived in Massachusetts, where we grew up, for years. Tonight at Dragon 88 we can hang out and yell at the Sox on TV. We can let our accents creep back. You know how people like to justify an early drink by saying “It’s five o’clock somewhere”? For us, that somewhere is Dragon 88.