Shop at the Incredible Portuguese Market on This Tiny Island 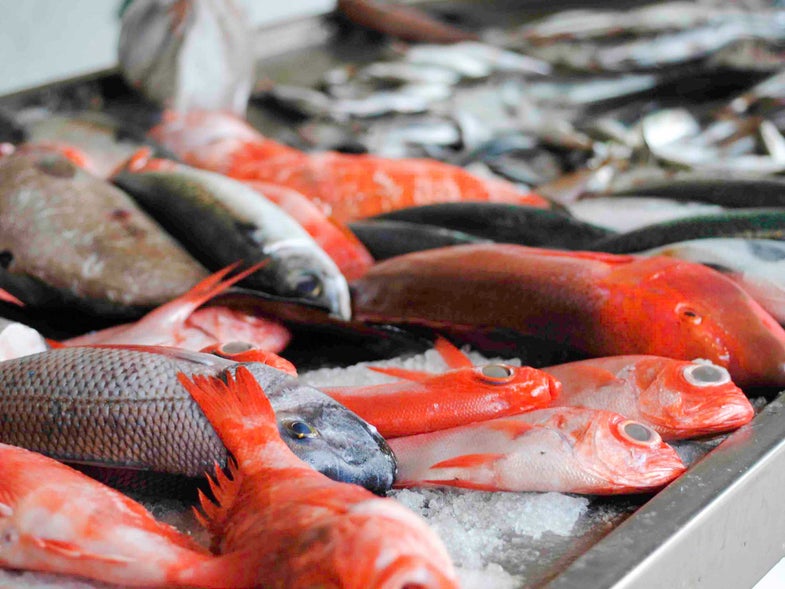 There’s no avoiding the ocean when you traverse Sao Miguel. The largest of the nine islands in the Azores—the Portuguese archipelago one third of the distance between Europe and the United States—“Saint Michael” covers around 290 square miles. The soil is volcanic, the result of hundreds of thousands of years of violent eruption that ended in the 17th century, leaving behind active hot springs, rolling hills cut by winding roads, and the bright blue of the Atlantic around every corner. Trees and flowers grow lush and lavish, making “The Green Island,” as locals call it, a popular stop for migrating birds and the watchers who follow them. Between land and sea, Sao Miguel’s isolation and robust environmental health yields a bounty of unique foods not found anywhere else.

Around 140,000 people live on Sao Miguel, most in row houses extending from the cobblestoned center square of each municipality, then stretching out and up into the hills. My father was born and grew up in Povoação, one of Sao Miguel’s six vilas—municipalities built around the largest craters shaped by the volcanoes—on the west side of the island. He emigrated as a teenager with his parents and siblings, but still returns regularly to see extended family there.

The first time he took me, I gorged on super-sweet bananas, green figs fresh off the tree, and sun-speckled oranges from my grandparents’ small backyard orchard and impressive garden. Sardines, caldo verde (kale and potato soup), blood sausag,e and soft goat cheese graced our plates on a regular basis. Cows teem on the island, and their meat made hamburgers as juicy as an 11-year-old American girl could ask for. I remember once running through the banana trees and turning a corner to find my grandmother calmly sitting and plucking the chickens I had fed that morning. I was getting an education on where food came from years before “farm-to-table” became a stock term for food writers. Economic hardship and physical isolation impose challenges on the Azores, but that same isolation means that offers incredibly unique experiences, too, like slow-cooking big pots of stew with the heat of the volcanic ground, or pulling wild honeysuckle from the side of the road to sip while on a long, meandering drive.

Ponta Delgada, the capital city of the Azores, plays home to the airport, mall, lone movie theatre, many government buildings, and countless churches. It’s the center of shipping, tourism, and commerce. But it’s also where most restaurant owners on the island stock up on both imported and local foods at a gem of a market nestled between narrow roads, a few blocks from the sea.

The Mercado da Graça (R. do Mercado, 9500-326) is not particularly large, nor particularly beautiful. It resembles an abandoned indoor car park. There are no prepared food stalls or tchotchkes. Much like Azorean cuisine itself, it does not try to be fanciful or photo-ready. Instead, the locally-grown and imported foods you can get there reflect the honest cooking of the island: fresh fish, meat, herbs, fruit, and vegetables are steamed, roasted, or broiled together for rich, earthy results.

My cousin Rita once owned several restaurants on the island, and now plays tour guide to those needing a smiling face and an easy translator. On my most recent visit back “home,” she’s surprised I’ve never visited the Marcado da Graca before and offers to show me around. It’s 11 a.m. on a Tuesday, and the bustle has long since died down. Most cooks get in there early, she says, as she calls out warmly to those she’s worked with in the past.

We start to explore.

The islanders call it “coracao negro,” or “black heart”, since it darkens to a harsh black as it ripens and then expires. A transplant to the islands from the Philippines, it’s grown on Pico, a neighboring island, too. Once you slice it open, it’s easy to remove the black seeds and eat the pulp with a spoon. The ripe fruit has a custard-like texture and is incredibly sweet, like a cross between a mango, a pineapple, and a banana.

Bananas grow everywhere and easily all over the island—the trees produce huge bushels with little tending from human hands. Much smaller in size than American versions, their thick yellow skins yield extremely concentrated flavors reminiscent of the small red bananas of South America. Unlike the half-dozen an American family might pick up at one go, it’s common to find an entire bushel hanging in a garage, being plucked progressively as they ripen. They’re generally eaten without fanfare off the bunch a few at a time; an on-the-go snack for those who work long hours from home.

Azorean pineapples are a thing of beauty. The islands aren’t tropical: While the temperature hovers at a moderate 50-75 degrees or so year-round, there are very few months of full sun, and the humidity is harsh and chilly rather than warm and balmy. So Azoreans, with the ingenuity that comes from isolation and economic necessity, learned to cultivate pineapples (originally brought over for ornamental purposes) in greenhouses. They speed up the ripening process by light smoking, concentrating the sugars and ripening the pineapples at a smaller size. The result is a compact, floral, bracingly sweet fruit that is most common simply sliced at picnics and formal celebrations alike. Pineapple jams are a common gift-shop purchase, as well as boxes of whole pineapples ready for taking directly on a plane and home.

Because of its volcanic history, the irregular sea floor surrounding the Azores provides many cliffs, reefs and plateaus for an abundant variety of fish. Red snapper, bluefish, and a variety of tuna come to feast on the abundant anchovies and sardines that the Portuguese are best known for. At the market, the fishmongers will boisterously make sure everyone knows their fish are fresh, and if you wake in the dark and head to the docks surrounding the entire island, you’ll find proof of that. Because of this, Azorean food relies much more heavily on fish than continental Portuguese. Because of their abundance and robust health, every restaurant on Sao Miguel will have plump sardines on their menu, most often simply grilled with salt and served with lemon and boiled potatoes. Sardines are an extremely affordable fish that are easy and quick to fry up, so everyone knows how to cook them at home, perfectly filleting and removing the bones before feasting.

The island of São Jorge started producing one of the most recognizable Portuguese cheeses centuries ago, when the robust cattle that fed alternatively on pastures of grass and legumes produced so much high-quality milk that islanders soon found they could produce far more than they ate, and started exporting. The raw milk is aged for a minimum of three months, producing a semi-hard, yellow cheese with a mild tang and a subtle grassy aroma. Aged longer (usually around nine months), it becomes slightly crumbly, far deeper in peppery and musty flavor, and leaves an almost puckered feeling in the mouth. On São Miguel, São Jorge cheese is most often served at the beginning of a meal, sliced thin, next to Portuguese rolls. It’s also a common quick breakfast or lunch sandwich.

When most people think of Portuguese sausage, they think of linguiça first, but in the Azores it’s all about spicy chouriço. We eat a lot of it, and it’s everywhere. Similar to Spanish chorizo, the smoked and dried links are dark with pepper, paprika and garlic; a bit smokier and darkly flavored than linguiça. Growing up, my grandparents used chouriço exclusively in their caldo verde (the most popular Portuguese soup, with pureed potato, thinly-sliced kale and rounds of sausage), and most restaurants on the island do the same. It’s also commonly served as an appetizer on slotted ceramic dishes, under which aguardente—a liquor similar to moonshine or gin—flames, giving the sausage its final outward char before getting sliced and eaten.

While pineapples need to be grown indoors, the cool winter winds, moist ocean air and limited sun means that hearty vegetables do particularly well on the island. Minhostos (or what my dad just calls “Azores yams”) are grown most often in Furnas; the municipality with the hot ground and boiling springs. They’re less sweet and far starchier than most yams, and are commonly served simply peeled and fried. Other favorites are purple yams, which are also sliced thickly and fried in oil until sweet and crisp.

It’s not uncommon to drive in a low gear up and around a winding road, and then come to a dead stop behind a herd of cows casually walking down the road. Cows outnumber humans in the Azores, and they’re often rotated to pastures every few days that are only reached by using the same narrow roads everyone else uses. Because of the vast amount of green, thriving, fertile land, all of the beef on the island is grass fed, incredibly rich and marbled, and is slaughtered continually for local use. It’s mostly prepared in stews or broiled and served with a fried egg on top.

Most Azoreans have a garden; even those in row houses will grow a few tomatoes or herbs with whatever light they can find. And because of the simplicity of the cuisine, fresh herbs are grown on a large commercial scale to accommodate those who use more than they can grow. Like the meat and fish bread or caught nearby, the herbs are also kept as simply grown and organic as possible. Mint, sage, rosemary and especially parsley are often added to the end of dishes to bring some brightness to the otherwise hearty cuisine.