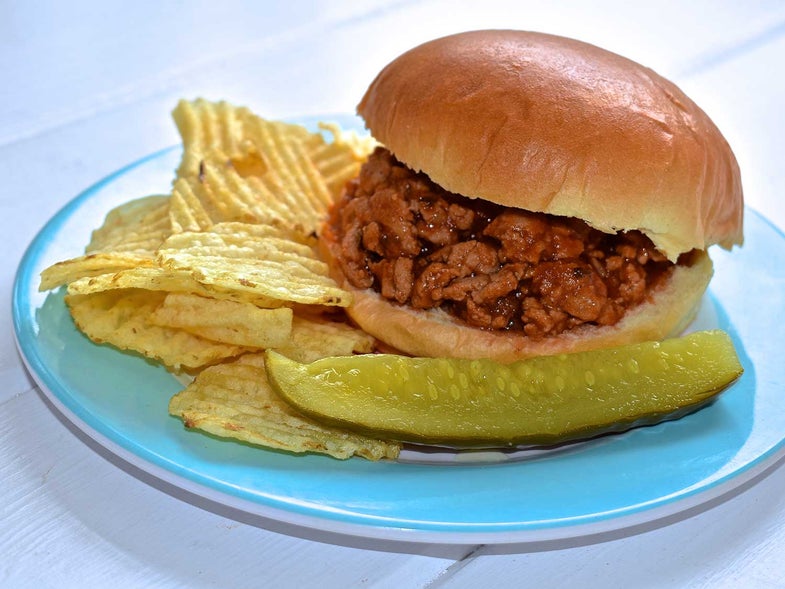 When it comes to legendary American lunches, the sloppy Joe ranks among time-honored classics like grilled cheese and PB&J. But before becoming a cafeteria mainstay, the humble sandwich actually rose to popularity in the years following The Great Depression and into World War II.

Adding common fillers, such as chopped onions and tomato sauce, was an easy way to stretch affordable cuts of beef and feed an entire family on a shoestring budget. But while the concept is relatively simple, the true origin of the sloppy Joe is about as messy as the sandwich itself.

One of the most popular—and widely believed—tales actually traces the roots of this American favorite to the shores of Havana, Cuba. According to lunchtime lore, a bar owner named José García started serving his handheld adaptation of the traditional ropa vieja dish in the 1930s to satiate his hungry (and often inebriated) patrons. Not particularly known for his tidy establishment, people began calling him “sloppy Joe,” a nickname that apparently stuck, both to José and his culinary creation.

And supposedly it was Ernest Hemingway who bridged the gap between the sandwich’s conception in Cuba and its rise to household fame in the United States. Hemingway allegedly frequented the Havana hot spot and enjoyed the snack so much, he implored his favorite bar in Key West adopt the name (and according to some accounts, the recipe as well). Today, Sloppy Joe’s remains a Floridian staple, selling more than 60,000 of the namesake sandwich each year.

Yet another legend insists the low-key lunch is as American as cheeseburgers and apple pie, born in Sioux City, Iowa during the 1930s after a chef (of course, named Joe) introduced tomato sauce to the typical loose meat sandwiches that were already popular in the region.

Over time, the sloppy Joe has undergone countless evolutions, enduring slight recipe alterations and assuming new monikers along the way. But the most notable (and adored) deviation can be found in New Jersey. Straying from tradition, Garden State eateries like Millburn Deli serve their sloppy Joe as cold double-deckers on rye, overstuffed with deli meats, cheese, coleslaw and Russian dressing. Believe it or not, the infamous bar in Havana also happened to inspire this unique statewide adaptation after a local politician visited Cuba, became a fan of the sandwich and urged local delis to create their own variation.

According to Donna Edwards of Sloppy Joe’s in Key West, the sandwich represents “good comfort food. All you need is the right mix of beef, sauce and spices.” The exact combination of those ingredients is entirely up to the creator, which is possibly the simplest way to understand why the sloppy Joe is an irrefutable icon of America’s beloved lunches.

At the end of the day, it really doesn’t matter where it came from, who invented it, or how it should be presented. Because if it tastes good, fills you up, and brings a happy memory to mind, it has done its job.