A Brief History of Cheddar Cheese 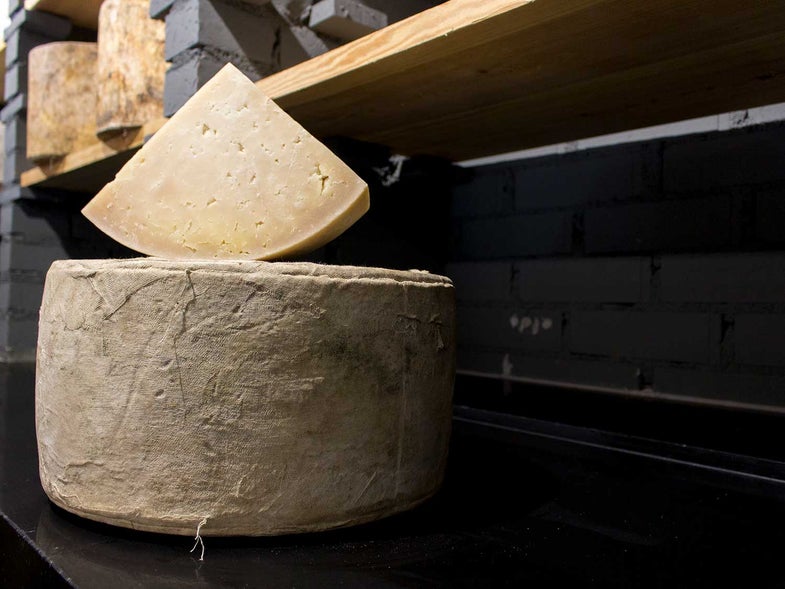 40 Cantagrullas will soon be available in select US Cheese Shops. Queserìa Cultivo
SHARE

The history of cheddar is the story of the transformation of our food supply. Over the past hundred and fifty years, cheddar cheese, once a regional specialty, has become one of the world’s most widely produced dairy products. Along the way, the cheese has evolved in style, flavor, and process. In spite of decades of mechanization, cheddar is still being made in vastly different ways—clothbound, lard-sealed wheels, wax-covered slabs, and six hundred and forty pound monster blocks—each style has its own uses and attributes, which makes defining “cheddar” a tricky proposition.

The word “cheddar” refers to many things; it is a noun, a verb, and even a place. A town in south-western England gave cheddar cheese its name; the act of piling slabs of curd on top of each other to make a long-lasting cheese is known as “cheddaring”. However, a cheddar, even when it is not cheddared or from the town of Cheddar, can still be considered a cheddar.

Three traditional cheddars are recognized by Slow Food as the world’s most historically important versions of that cheese. West Country Farmhouse Cheddar is the name reserved for traditional producers from Cheddar’s Region of Origin. “Cheddar” without modifiers is defined rather bloodlessly by the food laws of different countries using only fat and moisture levels. In the United States, for example, the FDA dictates that a cheese labeled “cheddar” must have a “maximum milkfat is 50% by weight of the solids, and the maximum moisture content is 39% by weight.” The milk type, method of production, and age are up to the producers, so long as they hit those targets.

Cheddar is especially well-suited to mass production, industrialization, storage, and travel. The first recorded cheese from Cheddar, England dates back to the 12th Century. Historically, cheeses were named for their origin rather than method of production and it wasn’t until the mid-19th Century, when producers in England, Canada, and the United States began collecting and comparing their best cheesemaking practices, that cheddar became codified. In the mid-19th Century, cheddar became the most widely produced cheese in the US, and so it remained for 150 years.

At its essence, cheesemaking is a means for extending the life of highly perishable milk protein. This is central to understanding cheddar’s rise to prominence, because the innovations in its method of production coincided with the industrial revolution. As food production shifted from the farm to the factory, cheddar was poised to be the “it cheese”. Essentially every step made to improve it either increased yields or improved its stability for shipping and storage before the ubiquity of refrigeration. 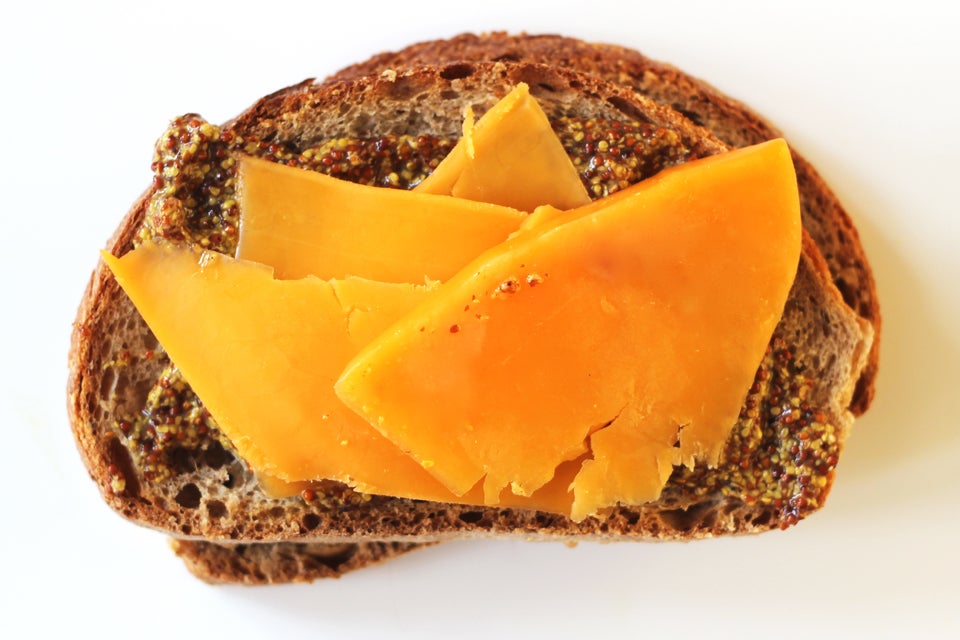 Dense rye bread is the perfect base for a generous smear of not-too-spicy whole-grain mustard topped with thin slices of a sharp cheddar. Get the recipe for Sharp Cheddar Sandwich »

Starting in the mid-1800s, a series of technological and scientific improvements were introduced to adapt the already hearty cheddar cheese to fit into industrializing food production, propelling it into its current popularity.

The “cheddaring” process is a technique through which excess whey is expelled from the curd; it made the cheese dryer, more durable, and less prone to spoilage. The technique replaced the old method of cheddar-making called “stirred curd” which was precisely as labor-intensive as it sounds. At the time, cheddaring made the whey extraction process faster and more efficient. (Contemporary industrial cheddars are made using automated curd-stirring equipment and are no longer “cheddared” at all.)

The “scalding” process, by which the curds are heated to rapidly expel moisture, was also introduced, and a subsequent milling and curd-salting step stopped fermentation so that the cheese would not be prone to bursting during aging.

A number of different techniques were introduced to protect cheddar from weight loss and mold. Initially, salting the rind was common practice, then buttering it. When cheap cotton—made possible by slavery—became available in the late 18th century, cheesemakers found that wrapping the fabric around the cheese and coating it with lard created an excellent protective seal. Today, most cheddars are aged in plastic or wax which, on an efficiency level, protect the cheese even better.

Finally, and most importantly, there was an increased understanding and adoption of modern hygiene standards across the cheesemaking industry, which ushered in a dramatic improvement in consistency and food safety.

Though many individuals played their parts in the evolution of cheddar, an English cheesemaker named Joseph Harding is often called the “Father of Cheddar” for putting together these technical improvements and combining them with rules for timing, temperature, and acidity to create a recipe that produced consistently good cheese. This allowed cheddar to take its “great leap forward” to becoming the world’s favorite cheese.

Indeed, cheddar is now produced all over the English-speaking world, with large and small-scale producers operating in the UK, US, Ireland, Canada, New Zealand, and Australia. In terms of volume, it is still one of the world’s most widely produced cheeses.

Regionality has always had an impact on cheesemaking; differences between local milks traditionally affected the flavor of cheese and informed the preferences of the people eating it. And yet, there is arguably no cheese subject to as much regional particularity as cheddar—even on the industrial level. New England block cheddar boasts a bitter-sharp flavor which lends itself to pairing with apple pie. Wisconsin typically turns out a moist, sweeter, annatto-tinted version, while UK supermarket cheddar tends to be tart, acidic, and crumbly.

“Clothbound” or “bandage-wrapped” cheddar is the most traditional style available today; wheels of the cheese are wrapped in cheesecloth and sealed with butter or lard, which allows a firm natural rind to form. Clothbounds tend to be less “sharp” than waxed or plastic-sealed cheddars because the older method does not allow for the extended aging periods common with block cheddar. However, this doesn’t mean that clothbound cheddars are lacking in flavor; fans of this style favor the deep and complex notes that develop with a more traditional aging process—at once earthy, grassy, dank, and fruity. Clothbounds were once nearly extinct, but there has been a major resurgence of this style of cheddar, both in the UK and the US, over the course of the last twenty years.

A new style of cheddar is emerging as well. By combining traditional bacterial cultures with those usually used in other cheeses (such as aged gouda and parmesan), cheesemakers have begun to create sweeter, more crystalline cheddars that are surging in popularity throughout the US; Americans love sweet, even in cheese.

Cheddar is perhaps the only cheese that allows the taster to sample their way through the history of modern cheesemaking. That’s just one of many reasons it’s so easy to love.