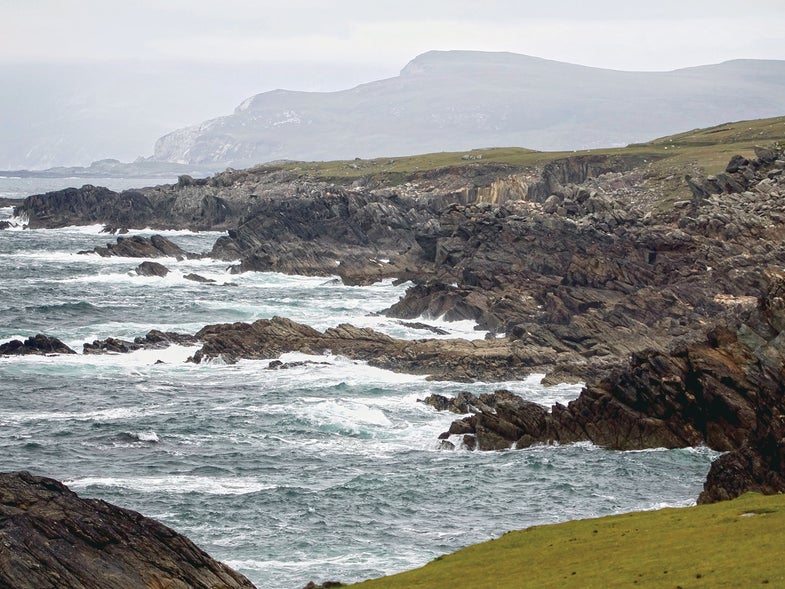 Ireland has always been known more for its natural beauty and spirited people than for its food, but times are changing along the nation’s 1,600-mile western coastline stretching from County Donegal in the north to West Cork in the south (called the Wild Atlantic Way). It offers a crazy tangle of a drive, full of extraordinary views from atop towering cliffs and inviting villages tucked snugly into nearly every twist. Because of a mix of geography and grit, new food artisans are emerging to join beloved businesses that have been around for decades. A road trip in the area has always promised to clear the mind. These days, it’ll enliven the palate, too. 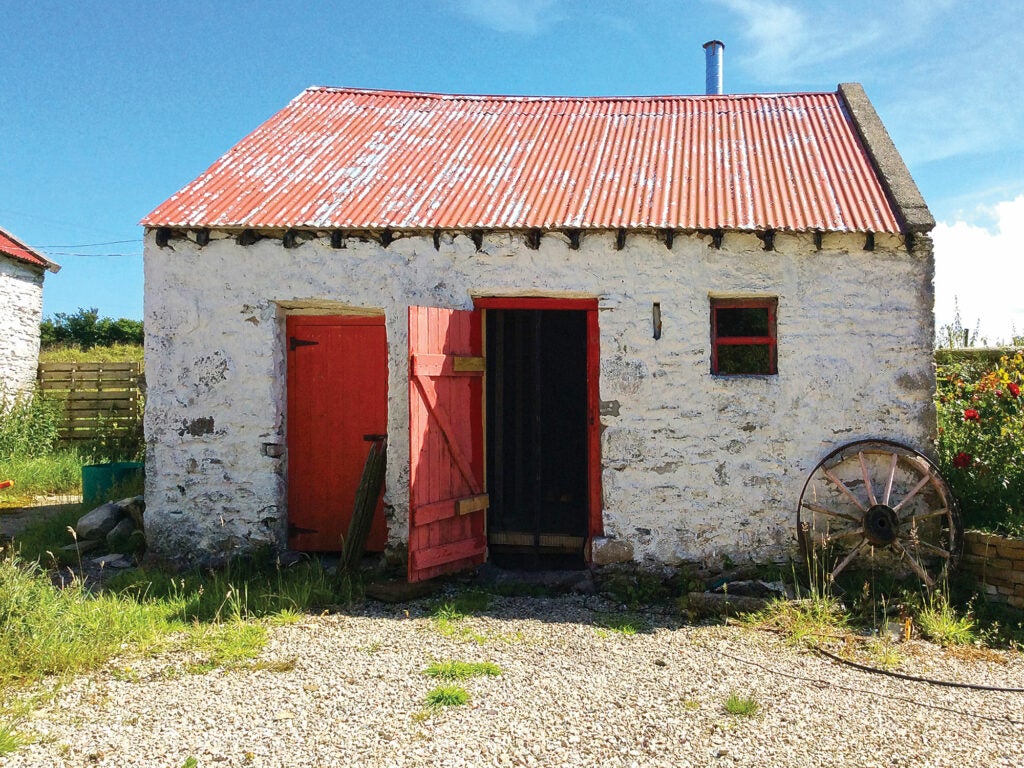 Locals have been smoking salmon in an age-old way, using peat—known in these parts as turf—for as long as the cliffs here have been softened by the raging ocean. In 2013, Sue Cruse and Declan McConnellogue traded in their urban life in London to open a traditional fish smokehouse on the northern cusp of County Donegal. McConnellogue hangs his salmon from the ceiling in his hand-built smokehouse and cold-smokes it for two days, a process that yields a sweet, earthy flavor and clean mouth-feel. “It’s best served unadulterated, without lemon, pepper, or bread,” he says. “It tastes of the sea and earth and nothing else.”
Claggan, Carrigart, Co. Donegal
tatuanseo.com 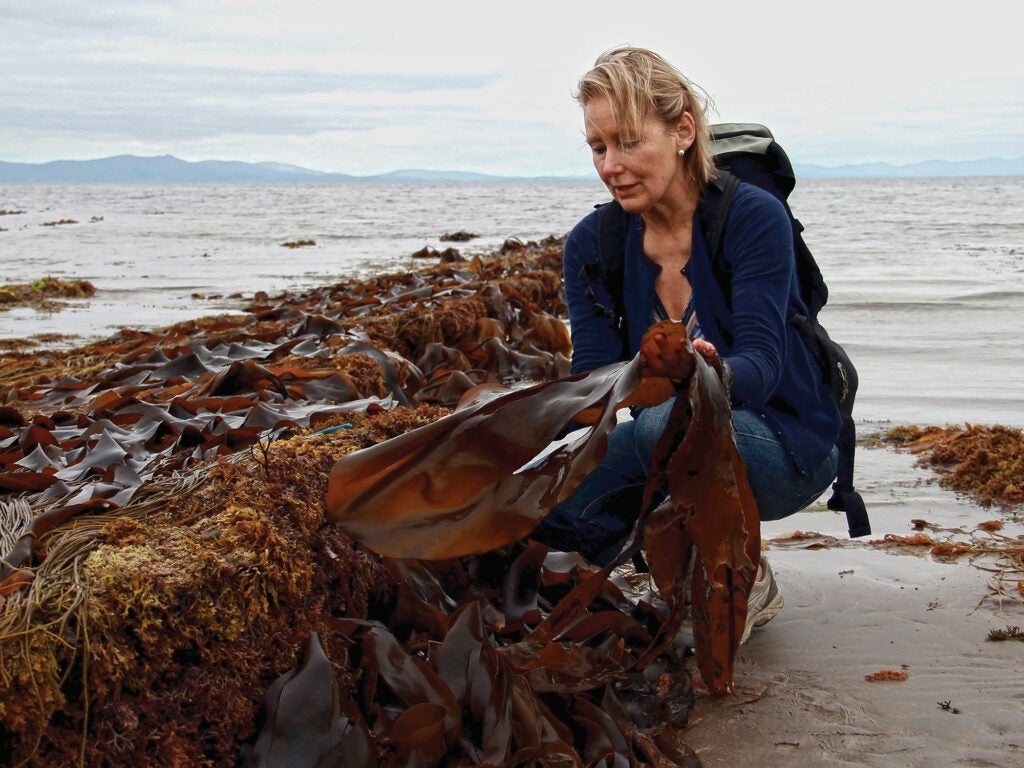 A Foraging Walk by the Sea

A Foraging Walk by the Sea

Seaweed once held an esteemed position in Irish culinary, medical, and agricultural traditions. Packed with healthful nutrients and minerals, it was appreciated for its texture and briny flavor in dishes, its rejuvenating properties in lotions and bath salts, and the fertilizing wonders it worked in the garden. The modern Irishman may have moved on from seaweed’s virtues, but Prannie Rhatigan, a doctor and author of the book The Irish Seaweed Kitchen, is on a one-woman mission to change that. Take a seaweed identification walk with her along the Streedagh Coast. It usually begins at Eithna’s by the Sea, a pioneering restaurant championing the culinary benefits of the algae. There, you can taste Prannie’s carrageenan panna cotta, which gets its firm texture and faint saline taste from—what else?—local seaweed.
irishseaweedkitchen.ie 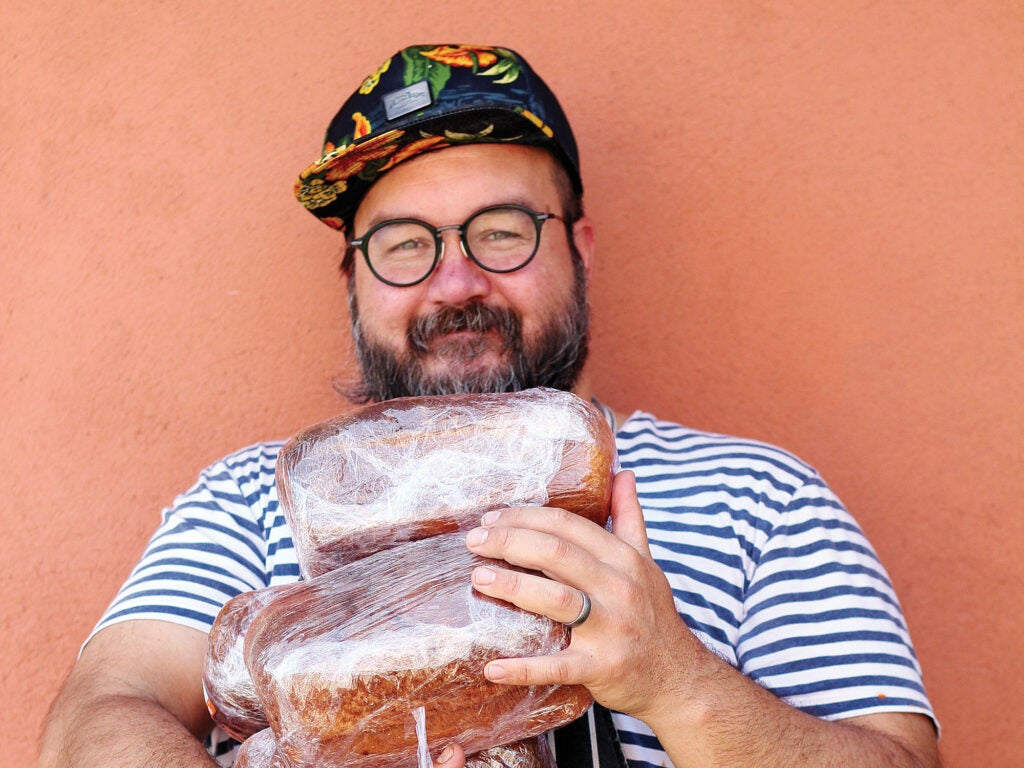 Myles and Jane Lamberth searched the world for a restaurant location before settling on the surfing village of Strandhill. Shells Cafe has a breezy deck overlooking ocean waves that draw surfers from around the world. After a dip, you can tuck into the Lamberths’ hearty dishes, like a peppery pulled pork shoulder piled high on toasted brioche with candy-sweet grilled tomatoes and hollandaise. While you (undoubtedly) wait for a table, head to the adjacent Little Shop, where you can browse shelves stocked with local products such as Mill Lane honey and Richmount elderflower cordial, or have a nibble of house-made baked goods to tide you over. Choose from cherry scones, bakewell tarts, and apple pies.
Seafront, Strandhill, Co. Sligo
shellscafe.com 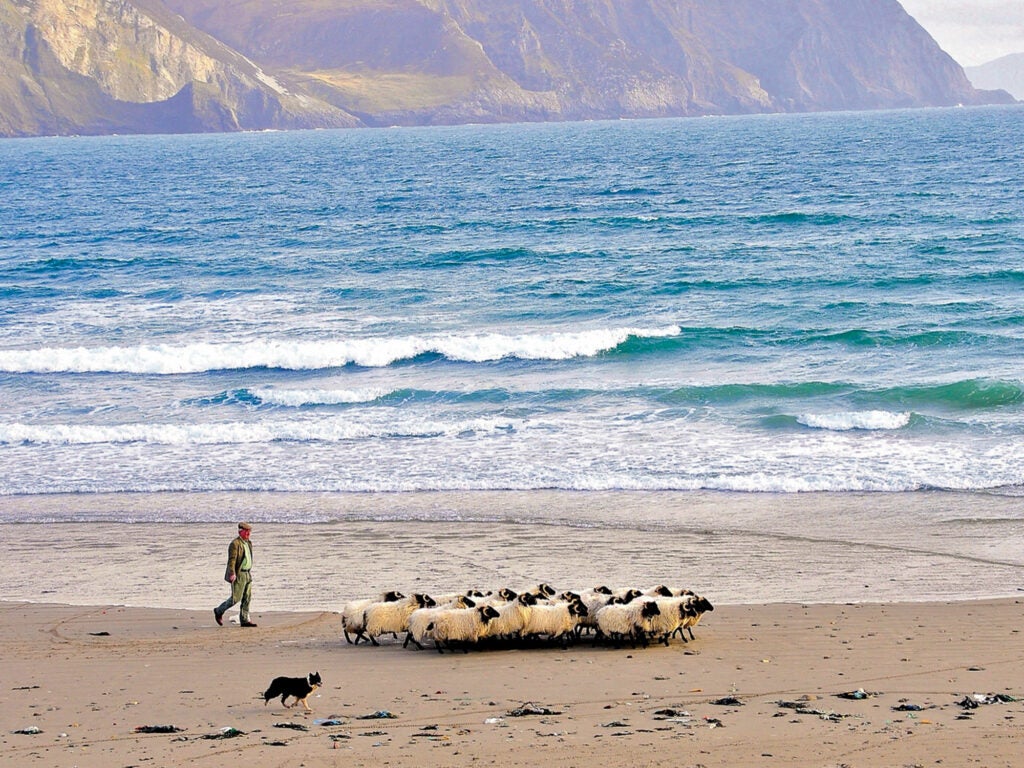 The sheep of Achill Island, which is connected by bridge to the mainland, roam over 20,000 acres of “commanage,” pasture shared by the island’s residents. They graze on samphire, seaweed, and calcium-rich grasses along the shore, and heather and wild herbs in the mountains. The result: meat that is “ocean-salty and heather-sweet,” says Martina Calvey, one of the ten children of Martin Calvey, who founded the business 50 years ago. The operation has grown to include Top Drawer and Pantry, a shop where you can take away dishes like honey-glazed, oven-roasted rack of lamb, or stock up on local products like sea-salted oil and homemade lamb sausage rolls.
Keel, Achill Island, Co. Mayo
calveysachillmountainlamb.ie 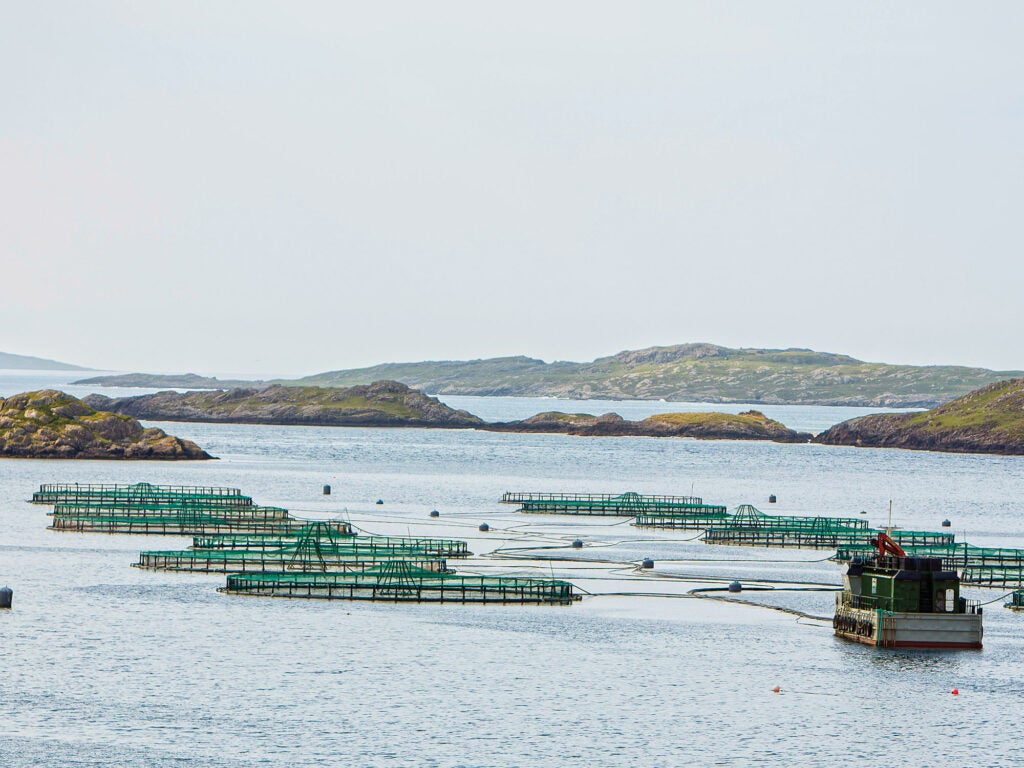 The tale of Marty’s Mussels, which opened in 2000, is one of love—and not just for the acclaimed bivalves, farmed in the open waters of Killary Harbor. Marty and Catherine Nee, two of the business’ founders, met as children when Catherine’s family summered in the area. She never forgot the local boy who charmed her, and years later, gave up a high-profile marketing job in Paris to join him back in the quaint town of Renvyle. Three children and tons of mussels later, the couple supplies to many restaurants throughout the region and has founded the popular Connemara Mussel Festival, which takes place in May. Pick up mussels at the farm if you have the means to cook them—it’s hard to find a fresher meal.
Lettergesh West, Renvyle, Connemara, Co. Galway
martysmussels.ie 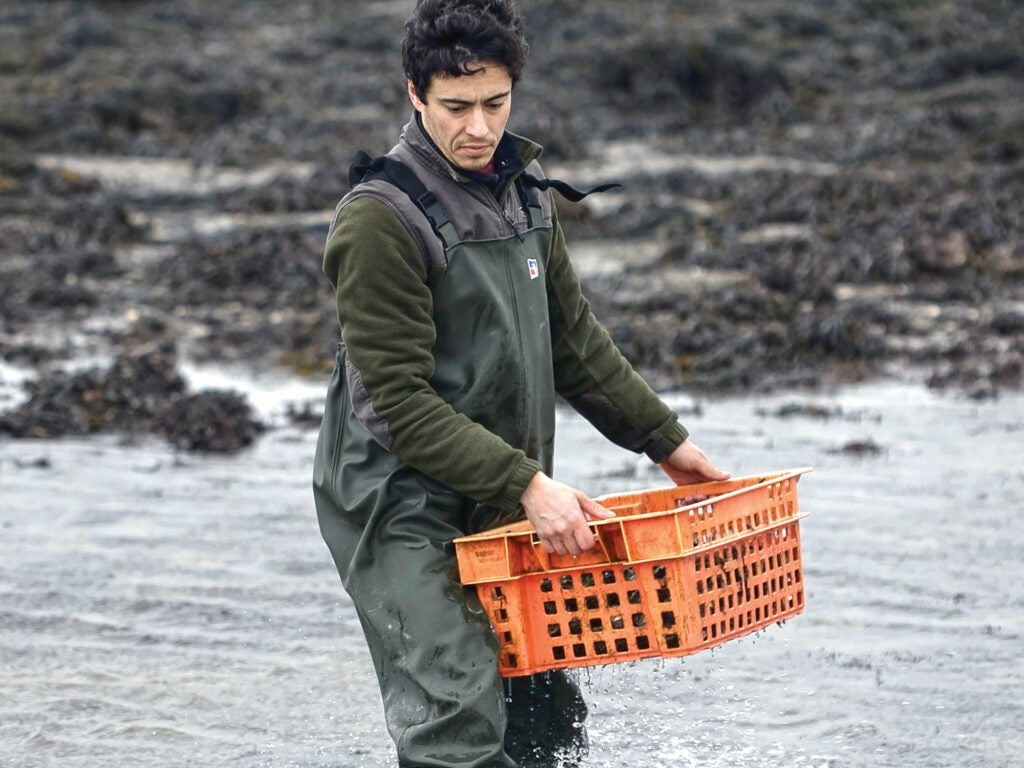 “It’s an old tradition in Ireland, but only recently have contemporary Irish begun to appreciate it,” says Diarmuid Kelly of eating the country’s oysters. Kelly Oysters was founded more than 60 years ago by his father, Michael, and now Diarmuid and his brother are part of the family business. Their coveted oysters are exported to places as far away as Dubai, and in raising and harvesting the shellfish, the family is keeping alive a tradition that goes back 1,000 years, to when the ancient kings of Connaught feasted on oysters harvested from Galway Bay. If you’re there in September, don’t miss the Galway Oyster & Seafood Festival, an event that welcomes more than 30,000 people each year.
Aisling, Tyrone, Kilcolgan, Co. Galway
kellyoysters.com


Hover over hot points to interact with map 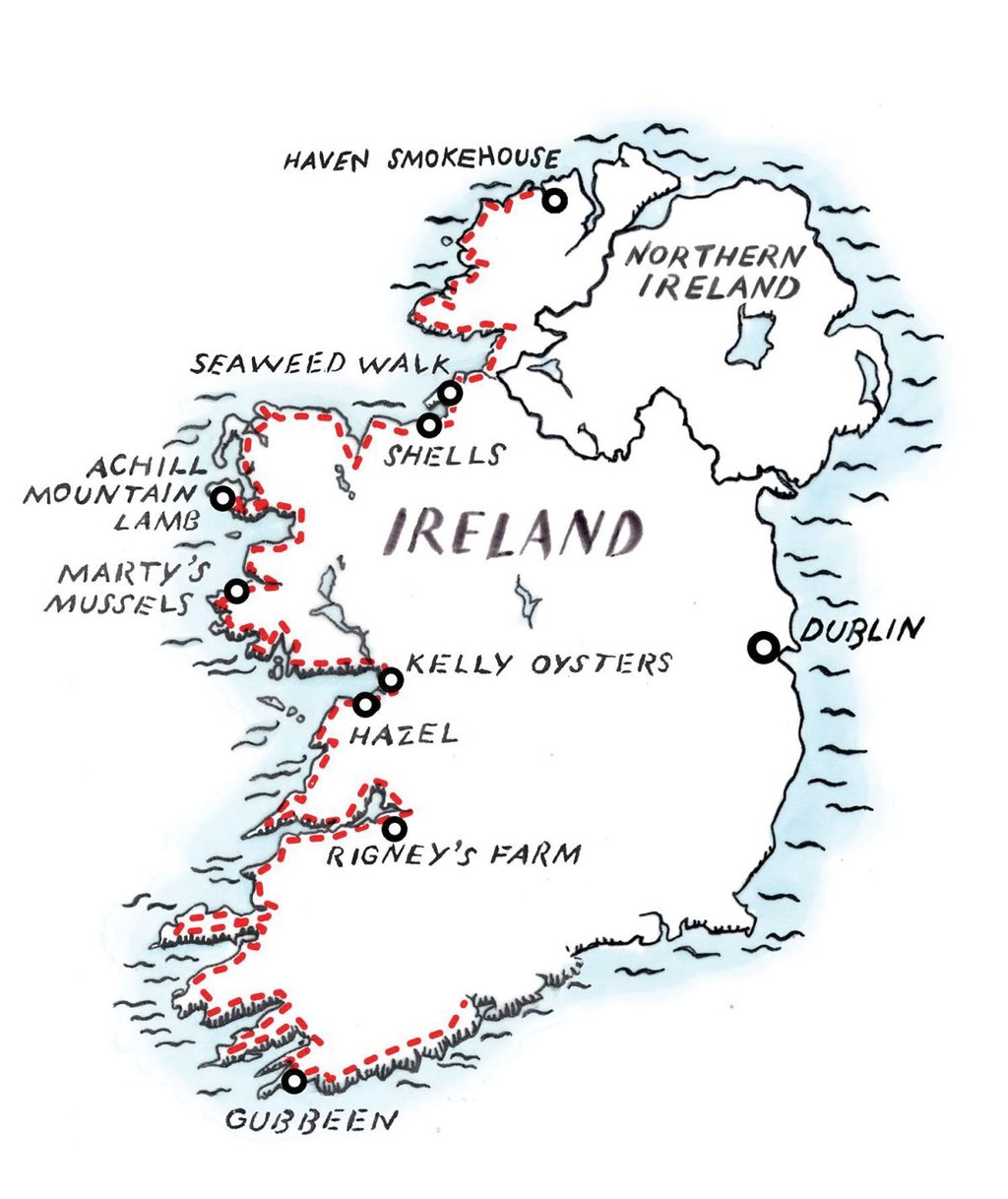 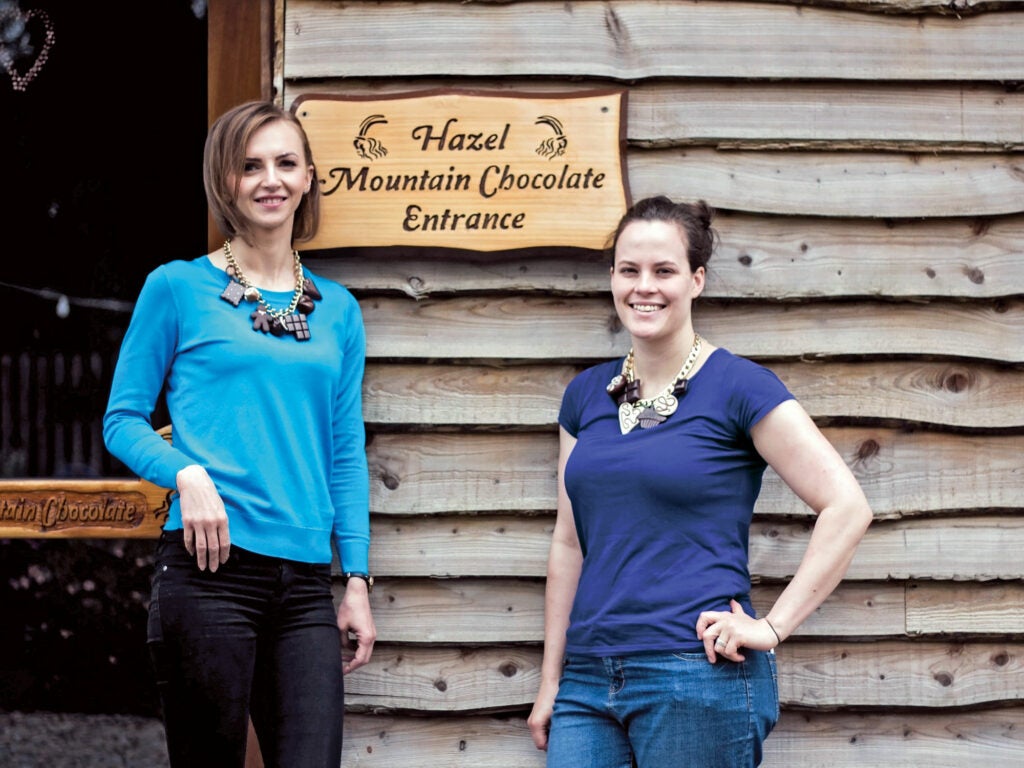 Owners Kasia and John Connolly, with help from chocolatier Ana Murphy, run the nation’s first “bean-to-bar” chocolate factory in the foothills of County Clare, and its confections speak to their varied heritage. Ana is from Texas, Kasia from Poland, John from Ireland: The factory’s café, where you can sample innovative dishes such as goat cheese and potato dumplings with sage cacao butter, is located next to the factory in his grandparents’ former house. After a tour, head to the shop, where you can buy innovative chocolates featuring Irish seaweed as well as pecan pie truffles.
Oughtmama, Bellharbour, Co. Clare
hazelmountainchocolate.com 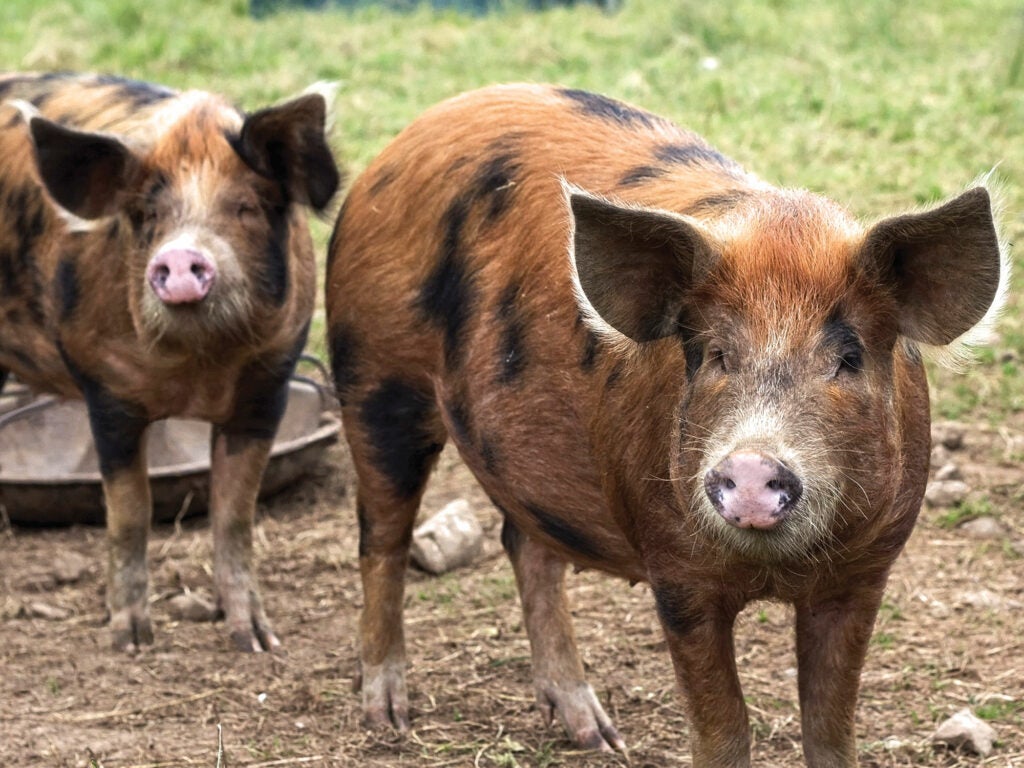 There’s an enchanted ring of trees in the middle of Rigney’s Farm, a B&B and family farm that opened in 2007 and raises rare-breed animals. “The cows come here to give birth,” says co-owner Caroline Rigney. “I suppose it’s because it’s flat in the center, but I also like to think there’s some energy at work from the past that brings them to ‘the farm’s maternity wing.'” She serves arriving guests scones hot from the oven and sells sweet-cured rashers and other products made from the farm’s pigs. Guests can gather their own eggs for breakfast and feed the livestock with Caroline’s husband, Joe, before venturing out on a hike through Curraghchase Forest Park, a 700-acre wood that Alfred Lord Tennyson wandered for inspiration.
rigneysfarm.com 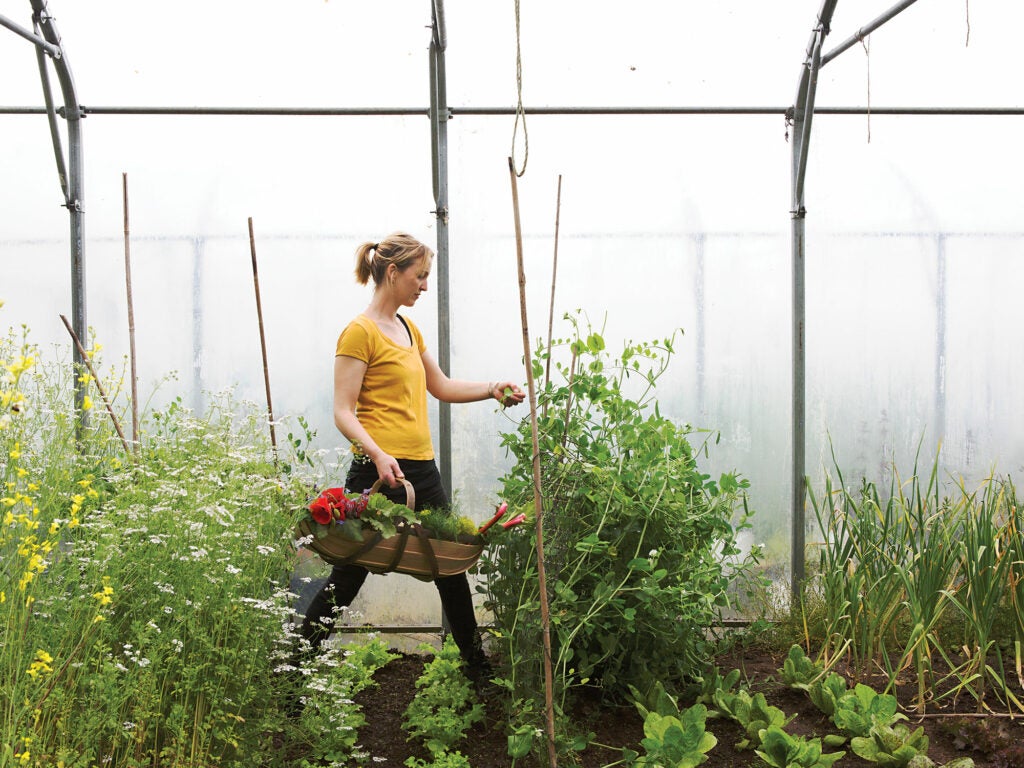 Gubbeen Farm, near the village of Schull in West Cork, has stood on the edge of the ocean for six generations, each passing down the traditional practices of their ancestors to keep alive a thriving, self-sustaining farm. The current caretakers are Tom and Giana Ferguson and their children, Fingal and Clovisse. Between the four of them, there’s a cheese maker, charcuterie producer, gardener, and knife maker. Gubbeen’s products, such as Ireland’s first chorizo and a washed-rind cheese that has notes of bog, forest, and earthy mushrooms, are found in farmers’ markets and stores throughout Ireland. On a visit, you might sample a warming bowl of bean and sausage stew from the on-site smokehouse, featuring tender pork infused with the flavor of the Celtic Sea, which roars just beyond the farmhouse doors.
Gubbeen, Schull, Co. Cork
gubbeen.com

Get the recipe for Gubbeen Farm’s Bean and Sausage Stew