The Last Lebanese Steakhouse in Tulsa

The city was once a hub for Lebanese immigrants, and a century later, tabbouleh and hummus still have a place on the table 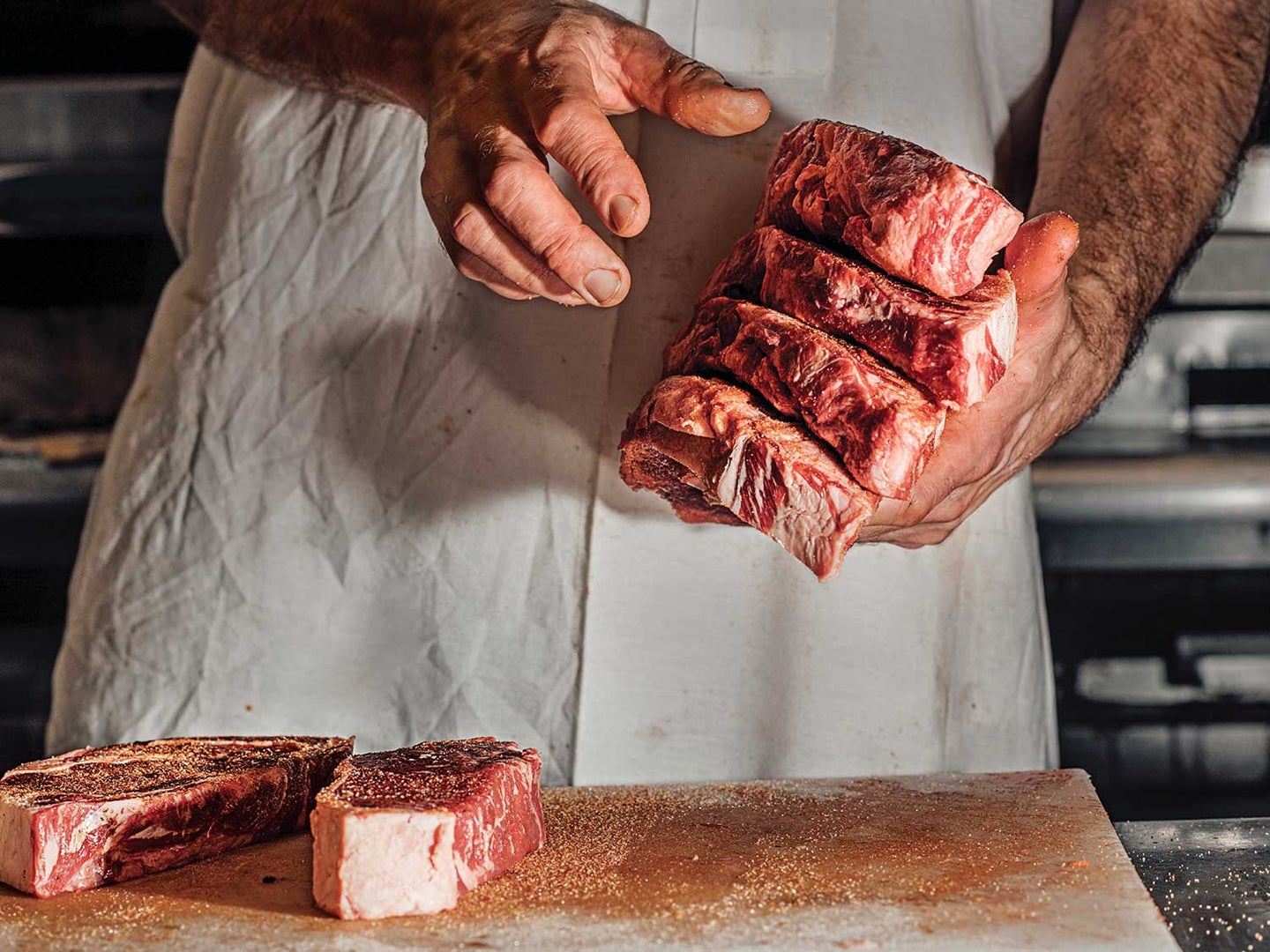 Like a lot of kids growing up in Oklahoma in the 1970s and ’80s, the first time Joe Davidson ate hummus was at a steakhouse. In the latter half of the 20th century, a series of Lebanese-owned and -influenced steakhouses—Eddy’s, Freddie’s, Joseph’s, Jamil’s, the Silver Flame—ran the scene in Tulsa.

“They didn’t tout it as Lebanese,” remembers Davidson, who is now the owner of Oklahoma Joe’s BBQ. “We didn’t even know where Lebanon was. But if you wanted to have a great rib-eye, that’s where you went.” Just one of these restaurants remains within city limits, serving gut-stuffing steak dinners where the Middle East meets Middle America.

The new location has plenty of old-school ambience. Denny Culbert

At Jamil’s, third-generation owner Jennifer Alcott’s feathery blonde hair floats around her face as she checks on diners with a gravelly, worn voice. Her grandfather, Jamil Elias, opened the original Tulsa location in 1946. It has moved three times since then, most recently in 2008 to a nondescript brick building just off I-44 in the southern part of the city. Inside, the faded floral booths, low lights, and endless array of old photos telegraph its age far better than its exterior. But to locals, it’s what’s on the tables that best evokes nostalgia. They come set with butter and crackers, and soon the hummus will arrive, along with tabbouleh, pita, and a refreshing and retro relish tray of pickles and crudités topped with ice cubes. The warm appetizers follow: barbecue sauce spiced with za’atar and sharp with vinegar and mint comes to the table in a metal creamer jar, and a basket with rib tips and smoked bologna arrives alongside cinnamon-scented cabbage rolls in a pool of tomato-tinged butter. It’s a cultural wormhole connecting Beirut and Tulsa. Finally, the entrée arrives—a thick hunk of beef, medium-rare, unadorned, with a foil-wrapped baked potato.

Meat and potatoes are only part of the draw at Jamil’s. Denny Culbert

More than half a century before hummus became a default supermarket snack and well ahead of the advent of “fusion cuisine,” Lebanese restaurateurs created their own hybrid style in Tulsa. A member of the founding generation, 90-year-old Don Abraham is one of the few who can shed light on how the Lebanese steakhouse came to be. He says it started with his uncle, Joe Abraham, who arrived to the U.S. in 1898. “Somebody beat him up, and he tried to get even with them. So my grandpa put him on a boat,” Don says. With little more than a gift for making deals, Joe worked his way across the country, trading, buying, and selling whatever merchandise he could get his hands on, until he landed in Oklahoma, where he eventually became a millionaire. (Legend has it that the peddler in the musical Oklahoma, who was a similarly gifted salesman, was based on Joe.) When word of his success reached the old country, Don says, “like half the town wound up here.” According to the 1900 census, when the area that would become Lebanon was still part of the Ottoman Empire, 100 “Syrians” lived in Oklahoma. By 1910, that doubled, and 1920 showed almost 700—in a place with fewer than 400,000 people.

Unconventional steakhouse sides are ready to be run out. Denny Culbert

Don was born in Oklahoma, but he grew up in Lebanon. When he returned in the early ’50s, he recalls hearing people speak Arabic in the streets. He took a job at a club that his brother-in-law Pierre Saab had opened and named after himself. “To me, he’s the one who started everything,” he says. His description of Pierre’s conjures scenes reminiscent of the 21 Club or Copacabana in New York City. Stars such as Ella Fitzgerald entertained as Saab served guests with the food of his heritage. “Pierre was classy, he was dressy, he was sharp,” Don says. For the oil big shots who patronized the club, steaks were a natural part of a night on the town, but the hummus and tabbouleh were the sleeper hits. The Lebanese steakhouse was born.

Pierre’s didn’t last, but it pioneered a lasting formula. Don went on to found his own restaurant, the Phoenicia. And Jamil’s added some Oklahoma flair in the form of meaty rib tips and sliced wedges of smoky bologna. For decades, these restaurants have been a throwback to a time when ribs were cheap enough to serve gratis as a show of hospitality.

It is the third incarnation of Jamil’s, the one that opened in 1957, that everyone remembers—­the white house with the red awning and carpet. Alcott, the current owner, is the rare person who won’t glorify the old Jamil’s. Diners recall the quirky entrance through a screen door that led them right into the kitchen, where a custom-made smoker did its work on the rib tips, big-handed cooks tossed steaks on the grill from the grocery bag on the floor, and the wonky construction created a warren of cozy nooks. Alcott remembers her grandfather bringing his dogs into the kitchen, how hot it got with no air conditioning, and the flies that descended the moment they opened the door. The restaurant also dealt with regular raids by the vice squad—­selling liquor by the drink was illegal in Oklahoma until 1984, and Jamil’s was well-known for selling “liquor by the wink.”

These days, the conventional wisdom among Tulsans is that Jamil’s was never quite the same after freeway construction forced the restaurant to move. The transition was a mess. “My dad didn’t have the new location inspected or anything, we were in such a hurry,” Alcott remembers. “So I deal with the plumbing problems now.” It closed for just two days between spots, but to many locals the essence of a place that drew celebrities like Muhammad Ali, Ray Charles, and Mickey Mantle couldn’t be transported. Alcott sees things differently, marking the decline to her mother’s death in 2006: “My dad was never the same.” Alcott estimates the restaurant was $350,000 in debt by the time her father, Tyrone Elias, died in 2018. As he suffered from dementia, the restaurant fell into disrepair. In 2014, he stopped paying taxes. “Dad, you’re going to have to give me this business or the IRS is going to take it,” Alcott remembers telling him.

Like Steve Elias (on left), much of the staff at Jamil’s has worked here (or at other Lebanese steakhouses in town) for decades. Denny Culbert

Even without those issues, the business model is a relic of another era, says Edmond Slyman. He worked at Jamil’s when he was young (including with Saab, after Pierre’s closed) and now owns the only other remaining Lebanese steakhouse in the Tulsa area, Freddie’s, in the suburb of Sapulpa. The crowd digging into the cabbage rolls is overwhelmingly white-haired. These steakhouses trade on value rather than luxury: a mountain of food, with nothing on the menu over $30. “Ribs are expensive now. If I tried to open a place like this right now, I couldn’t,” Slyman says. “The only reason I can do it is my base—land prices and so on—is back in 1979.”

Get the recipe for Za’atar Barbecue Sauce » Denny Culbert

But even as rib prices soar, the same thing that ingratiated Pierre Saab to the high rollers in the first place keeps today’s steakhouses alive. “I don’t have a nickel’s worth of culinary artistry,” Slyman says. “It’s hospitality.” His army of teenage servers buzz about the room as he explains how he’s trained generations of employees: That it’s all about the customers having a good experience. Which is why, for so many years, people have trailed to Freddie’s for the exact same level of service and taste of tabbouleh. “If we changed things,” Slyman notes, “we’d get too many complaints.” Alcott, on the other hand, has had to switch things up to keep her restaurant afloat. “I’ve had to slowly charge people that my dad wouldn’t charge,” she says with a shake of her head. Her father’s hospitality meant letting people run up credit that was never paid and free meals for police. Alcott now charges local officers a reduced flat rate of $10.

Get the recipe for Steakhouse Tabbouleh » Denny Culbert

On a recent Saturday night at Jamil’s, people waited outside for the doors to open at 5. Here, the customers are greeted like they’re family. They’re not, but many of the staff are: Alcott’s 68-year-old cousin, Steve Elias, holds court in his tuxedo shirt and bow tie. He worked for his own father’s steakhouse, Eddy’s, until it closed in 2016. He knows the tricks to the menu, advising customers to top the cabbage roll with the tangy hummus and to liven up the ordinary green salad with a spoonful of the tabbouleh. Alcott’s husband is the chef. The oldest of her six kids, Jack, is on the floor tonight.

These are the people who carry on the Lebanese steakhouse tradition. Jamil’s is almost out of debt, and Alcott has just begun to dream of the improvements money could buy. Higher booths, new tablecloths, a point-of-sale system, and maybe—if the changes work—a real bar.

She hopes it will challenge the idea that Jamil’s has never reclaimed the magic of its old location—something that those in the know might already see. Lebanese-Tulsan old-timer Ronald Fogley, sitting with his friend Don Abraham, leans in, as if sharing a secret. “I think Jamil’s is turning around. I think Jennifer’s doing good things with it,” he says. Don, the elder statesman, gives a silent nod.