NYC to CSA: A Pesto for Your Pea Shoots

When salads and sautés get to be too much, spread your greens instead 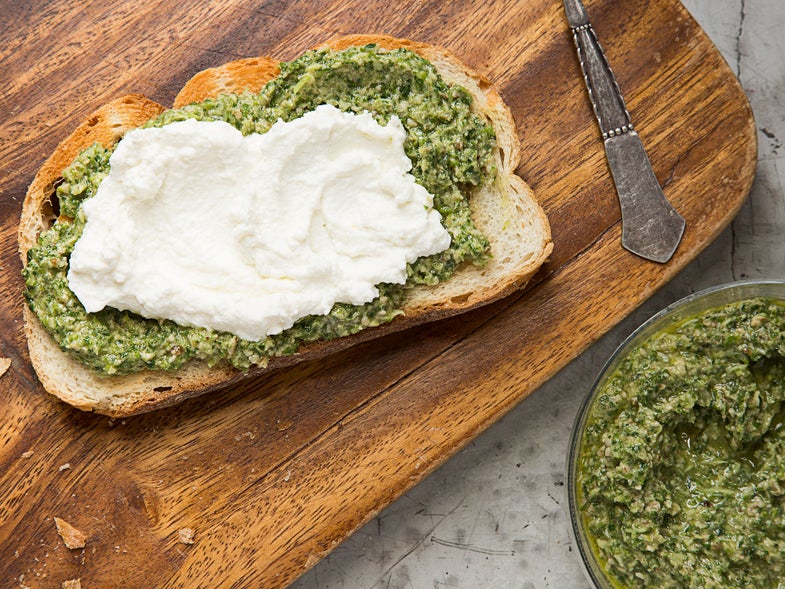 Since moving out of the city and joining a CSA, I have come to love navigating this new world of vegetables. I no longer fear radish greens. Collards are my new black. But some days, when my fridge is bursting with Red Russian kale, Swiss chard, head lettuce, and pea shoots and I have stuff to do, leftovers to eat, and a hankering for grilled cheese, it’s not all rainbows and unicorns. At these times, there is a little bit of concern and a little bit of dread.

Pesto is the natural solution to greens coming out of your ears. But for so long, I resisted making it. My deterrents were twofold. First: Every summer growing up, my father devoted one day in the dead of summer to pesto-making. He would soak and air-dry basil, hand-grate Parmesan, and scrub the blender. He was an artist, and treated both the ingredients and his ratios as though they had some bearing on the delicate balance of the universe. The process took him—I kid you not—from noon until dinner. Whether the tradition took place just once a year for romantic reasons or because it was such an undertaking, it’s hard to say. But I have my suspicions, and they’ve shaped me.

Deterrent number two is a more recent development and has everything to do with being grateful for the farmers at Amber Waves and feeling that taking the greens they coddle from seed to CSA box and blending them into oblivion is both sacrilege and an insult.

So mostly, I steer clear of the blender: I make too-big salads and sauté up a bok choy snack when I’m not hungry. I’m not complaining. But then come the pea shoots, and that’s where I draw the line. Their stems are tangled and woody and a quick drizzle of olive oil and lemon juice won’t help. So, finally, it’s time to get over it. It’s time to realize that the sum of some parts is better than not. I take out the blender and recognize that it can, in fact, accentuate ingredients, not just obliterate them. Often, I add mint instead of basil, because it’s lighter, like eating sunshine, and it can stand up to too much olive oil when you forget to measure. And then I smear that sum on ricotta toast, add it to sweet potato hash, and use chicken or a veggie burger or a rice cake as a vessel for maximum pea shoot pesto consumption. Suddenly I am respecting my father’s tradition, respecting the pea shoots, and wishing they could hang out all season long and forevermore.

See the recipe for Pea Shoot and Mint Pesto »