How Pittsburgh’s Famous Sandwich Became its Most Beloved Fake News

Everyone in Pittsburgh knows the Primanti Brothers namesake sandwich originated as a lunch for local steel mill workers, but … what if it didn’t? 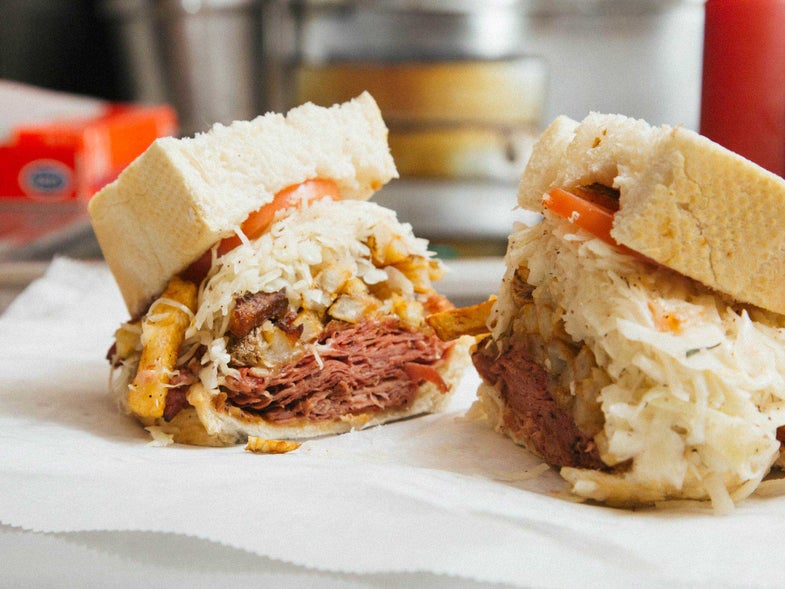 If you ask anyone from Pittsburgh about the history of the city’s beloved “Pittsburgh sandwich,” they all tell you the same things: It dates back to the 1930s. It was originally a lunch for rushed steelworkers on a quick break from the mill. Its most recognizable feature—french fries and coleslaw piled inside the sandwich—came about so that workers could have their whole lunch at once, sides and all. Lauded food historian Donna Garbaccia wrote that the sandwich was likely made this way for the men who “carried their lunch to the mill.” It’s a mythology near and dear to Pittsburghers’ hearts—modern blue collar workers feel pride in their city’s most nationally known food, and both current and former residents can recall the glory days of their great American city with a great American sandwich.

The sandwich’s physical form adds to its impressive stature in the city—first is either a spiced beef patty or any variety of sliced meats, then provolone cheese, a handful of thick-cut French fries, and a pile of vinegar-based coleslaw, skillfully stacked between two slices of soft Italian white bread. It is both an indulgence and a challenge, a trophy best enjoyed with a local Iron City beer.

The problem is that the great sandwich lore, while romantic, isn’t true. Despite the fact that almost everyone in Pittsburgh knows this story, there just simply isn’t any evidence to support it.

Growing up in Pittsburgh myself, I never doubted the story. Not until I set out to document it. Frustrated by a lack of information on the topic, my Google searches became increasingly frantic. The only recountings of the steel worker lunch appeared in personal anecdotes on Trip Advisor, Yelp, and a dated Penn State University article. The rest was divergent. A few sources went as far as describing the sandwich’s creation as an accident. Confused (and bit forlorn), I finally headed straight to the source: Primanti Brothers Co., the restaurant home of the “Pittsburgh Sandwich.”

“Well,” said Primanti Brothers’ Ryan Wilkinson when I asked him about the sandwich’s origins, “it was actually for the guys working the produce terminals and the docks down in the strip when it was a bustling area back in the early part of the last century.” The original Primanti Brothers was adjacent to the city’s produce warehouses, and served truck drivers, primarily, coming from all over the country to deliver produce. Open only from 11:00 p.m. to 11:00 a.m., it also wasn’t even lunch, so much as a bleary-eyed late night meal. No steel mill heroes, no shared conviviality in some great lunch tradition.

The sandwich has since received national press, on the Travel Channel and Food Network’s Man vs. Food, and show writers explicitly state that the sandwich was for truck drivers in the early 1900s. Yet no one in Pittsburgh seems to have gotten the memo. In fact, when I went to photograph the sandwich at the original Primanti’s location last month, a local man waiting in line leaned over, entirely unsolicited, to tell me how this was his city’s sandwich, a steel workers’ sandwich, and you couldn’t find it anywhere else in the country. But actually, Primanti’s has locations in several states now, and, according to another customer there, other regional restaurants will make you a “Pittsburgh” sandwich—with fries and coleslaw on it too.

“Yeah, there is a lot of lore out there,” Wilkinson admitted.

Regardless of its validity, our food lore is a powerful way for us to understand our collective identity. What supersedes the actual origins of this sandwich, or any other dish, is our collective food narrative—a shared history that we continue to pass down, and use as a way to frame our (and our city’s) past. Food myths are notoriously potent—Thanksgiving remains a likely fabricated food story that we nonetheless maintain. New Yorkers ardently insist that the bagels in their city are better due to the quality of the water, (which, may actually be a little bit true), and we continue to recount the myth that “chicken and dumplings” originated as a thrifty, Depression-Era poverty food. There is a pride and an ethics often embedded into our eating mythologies.

And Pittsburgh is just that kind of town—deeply rooted in the pride of being blue collar, welcoming any thread to reinforce that idea. The interesting thing is that while that narrative today is often flecked with conservative political division (many previously democratic, union-friendly counties in Western PA turned red in the last election), the origin of the sandwich is truly about immigrants and diversity.

“At that time, [there were] probably a lot of immigrant workers doing those kinds of physical labor jobs,” Wilkinson explained. “At that period of history, it would have been a lot of Western European immigrants. The [immigrant] makeup of Pittsburgh at that time was going to be represented on the docks of the Strip District.” According to Stefan Lorant’s Pittsburgh: The Story of an American City, by the 1930s, immigrants made up more than a third of the city’s population. They hailed from all parts of Europe, including Hungary, Latvia, Poland, Estonia, Armenia, Ireland, Germany, and Italy—where the Primanti brothers themselves had their roots. Steel tycoon Andrew Carnegie’s agents went to small villages across Europe, encouraging migration to Pittsburgh for jobs in the city’s mills, and by the early 1900s, immigrants were “pouring in by the thousands,” substantially increasing the city’s population. A social census done in 1915 in the neighborhood of the original Primanti’s noted that “83% of the population of the Strip District is of foreign parentage.” Thus, the infamous sandwich was one created by Italian immigrants (or recent descendants), and likely served to newcomers from distant lands.

So if you walk into a Primanti Brothers restaurant, I don’t know what story you’ll hear. Personally, I’ll maintain both—I can’t help but exert some misplaced rust belt pride over the fact that my parents met in a steel mill. Perhaps there are foods in our city that were, in fact, inspired by that infamous industry. But I also hope to tell the story of the “midnight lunch” of truck drivers and dock workers: a sandwich for and from a city of immigrants.