You may start off eating them only because they're free, but there are lots of reasons to like hamantaschen 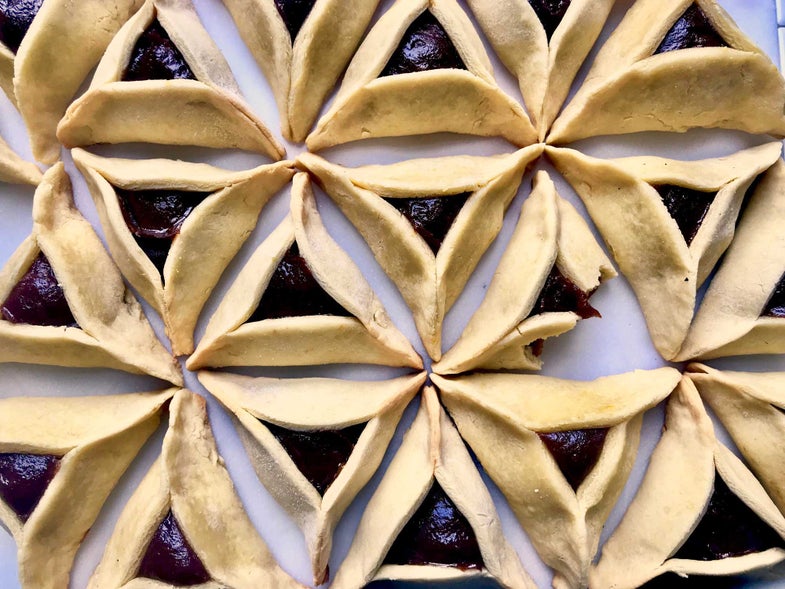 Purim, the Halloween of the Jews, is a time when everyone dresses up in costumes, reads the megillah, and eats triangular fruit pastries called hamantaschen. Like many other Jewish holidays, Purim can be boiled down to one sentiment: They tried to get rid of us and we survived, so let’s eat!

When I recall Purims past, I distinctly remember learning how to make the cookies from the Rabbi’s wife. When I say “learning”, I really mean I rolled out premade dough, cut it into circles with a cookie cutter, plopped a dollop of filling in the middle, pinched them into triangles, and tried not to get caught eating a couple before they were baked. It was a kid-proof lesson with the majority of the process pre-made. The end result less than gourmet—hard and bready, nothing like the Toll House cookies I then favored. The fact that the temple handed them out by the dozen was practically the only reason to eat them.

My parents never had the time to make the Purim treat from scratch—of course, there are no box mixes for hamantaschen—luckily, our local TooJays solved this problem. A working family’s life saver, the New York-inspired Florida deli chain always made enough for all the Jewish moms to play them off as their own.

TooJays also had other Jew-ish desserts, the kind that are present at every other holiday feast—rugalach, coconut macaroons, and black and white cookies—all of which I would have gladly eaten over hamantaschen. But the Jews love tradition, so each Purim I found myself angrily eating the seasonally appropriate cookies.

Every year was the same: Me, probably looking ridiculous dressed up as a princess or a fairy, scowling as I tore into pastry after pastry. It must have been quite a sight, because finally after five or six years, the Rabbi’s wife decided she was fed up with my pouting. She chose me to play Esther in the Purim Shpiel, a play version of the story, which goes a like this: “A triangular hat-wearing anti-semite name Haman (boo!) tried to kill all the Persian Jews and was stopped by Queen Esther (woo!), who was secretly a Jew, and her cousin Mordechai (woo!).” It is an interactive event; whenever you hear the name Haman you boo, and when you hear the names of the good guys, you cheer. As a kid, you are told the hamantaschen’s distinct shape comes from Haman’s three-cornered hat, but like most Jewish things, it is loaded with symbolism.

Originally, the cookie was referred to as oznei Haman, directly translating to “Haman’s ears,” which refers to the medieval tradition of cutting off a criminals ears before they hang, a fate that may have befallen Haman. In 18th or 19th century Eastern Europe, a triangular pastry pocket filled with poppy seeds often called Mohntaschen was popularized—”mohn” meaning poppy seed, and “tasch” meaning pocket. So combine oznei Haman and mohntaschen, and you get hamantaschen.

Why poppy seeds? Since Esther couldn’t tell anyone she was Jewish, no one knew she kept kosher, so she lived of a diet of beans and seeds. Nowadays, however, you can find hamantaschen filled with any type of filling, from sweet to savory.

After years of silently hate-eating hamantaschen on Purim, this year I had the opportunity to make then again—or rather, watch it being made, since I learned nothing the first time around. As our Test Kitchen Manager Kat rolled out the dry dough, filled the circles with heaps of filling, and pinched the dough into three corners, I felt close to this tradition, practiced by the many millions of Jews that came before me.

But these were so much better than TooJay’s and the Rabbi’s wife’s. It reminded me of the real lesson behind Purim: the idea that the Jews could take such a potentially horrible event and turn it into a celebration of strength, perseverance, and community.