Is the World’s Best Butter Worth 50 Dollars a Pound?

Alex Halberstadt scores a bag of the creamiest, most coveted stuff on earth and ponders a question: can you put a price tag on outstanding dairy? 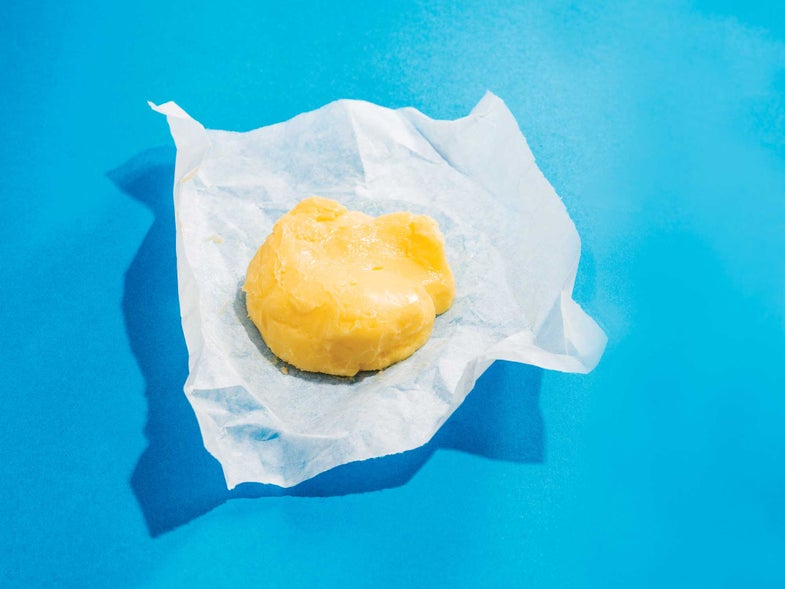 If you’ve never been in the presence of a day-old calf, they happen to be disconcertingly large. Recently I followed one—the color and size of a golden retriever—as it stumbled around Diane St. Clair’s barn, bleating loudly. Rain pounded on the roof, my boots were spattered with mud, and my neck ached after a five-hour drive. But it hardly mattered. I’d come to this sparsely populated corner of western Vermont to taste the country’s most sought-after butter.

In a tiny creamery just off the barn, St. Clair reached into a refrigerator and took out a pound of her product—four dandelion-yellow balls in a large Ziploc bag. A former New Yorker with no experience in food production, she began making butter almost by accident, after buying a pair of Jersey cows. Wanting an expert opinion, she mailed unsolicited samples to Thomas Keller; he called back to say he wanted to buy all of it, and eventually asked her to acquire more Jerseys. These days, outside several fine-dining restaurants, St. Clair’s Animal Farm butter is only available once a year at the Middlebury Natural Food Co-op and at Saxelby Cheesemongers in New York. The butter comes in the same Ziploc bag, costs $50 a pound, and sells out within hours.

For most of my life I’ve been preoccupied with butter. Of course there are those culinary Bartlebys who believe it to be nothing more than a baking ingredient or, worse, a condiment. Nutritionists continue to dispute its merits. Oh, I could tell you that Tibetans make it into sacred sculptures and the ancient Finns were buried alongside barrels of it, but I won’t. I will tell you, though, that for diehards like me, butter is the purpose of mashed potatoes, scones, and summer corn, the reason that bread exists, the very fulcrum of eating. What moves me about butter is that unlike cheese or pastry, its essence isn’t confected but comes directly from the land. Elaine Khosrova, the author of Butter: A Rich History, described it to me as “a pure presentation of man, land, and beast.” Like oysters and wine, it’s one of the perks of being born on this planet.

My obsession with butter began among identical rows of tenements on the outskirts of Moscow where I grew up in the late 1970s. The groceries in our sparsely populated supermarket aisles ranged from unexciting to barely edible; one of the few exceptions was the fresh rye bread sold every morning in bakeries across the city, especially the dense, chocolate-hued loaves topped with coriander called Borodinsky. Naturally, they required butter. This became the best part of my midday meals, eaten in the school cafeteria under portraits of jowly Politburo chiefs. The slightly sour bread was the foil for the Platonic butter of my memories that opened with bright, creamy sweetness and, after a tangy sour note, faded in a long, lightly nutty finish. The mouthfeel was firm and unctuous but never greasy.

Somehow, as an adult, I began to forget butter. I ate supermarket brands and assumed that my longing was a figment of childhood nostalgia. Then, several years ago, while in Reims, I tasted a butter that obliterated the memory of the very worthwhile Champagnes on the table. It was made by Jean-Yves Bordier in Brittany, and was not imported to the United States. But the experience of Bordier stayed with me. In time, it ignited a determination to recapture the taste I remembered.

Finding a stand-in for the bread of my childhood took no time at all. The crusty miche from Bien Cuit, a bakery near my home in Brooklyn, was a delicious substitute for the Borodinsky. But replicating the butter proved slippery and enigmatic. First, I visited New York’s Russian-Jewish enclave, Brighton Beach, for several specimens made in the land of my birth. I found them in a store with smooth jazz on the speakers and the delightful name of Gourmanoff. Unfortunately, these items turned out to be mixtures of butter and vegetable oil with the texture of margarine. Premium and imported brands from the grocery store didn’t approach the experience I remembered either. Most tasted waxy, grainy, or dull, with no discernible finish.

I knew it was time to get serious. So, several months ago, I delved into the surprisingly contentious thickets of butter connoisseurship. I wanted to understand what drove the most obsessed of its producers, and which criteria they prized. I ate more of it than might be medically advisable. I’d assumed I knew my butter, but here’s what I learned: Sometimes the thing we love is the one we know least of all.

The further I waded into what makes for great butter, the less tractable my search became. Many aficionados insist that culturing—the extra step of allowing the cream to ferment before it’s churned—is the key to deep flavor. Certainly the best cultured butters (sometimes labeled “European-style”) possess a subtle tangy note that can add complexity, but the process does not assure a superior product. Some of the butters I enjoyed most happened to be of the uncultured, or the “sweet cream,” variety.

Some brands tout fat content as the key to quality and print it prominently on their labels. In the U.S., federal regulations require butter to be at least 80 percent fat, a level some insist is too low. But to my surprise, several expensive high-fat butters tasted bland and oily. “As you ramp up fat content, you squeeze out more milk solids,” explained Aaron Foster, owner of the Brooklyn specialty food shop Foster Sundry. “The fat itself is relatively mild, so you get richness at the expense of flavor.”

Then there is the dilemma of salting. There are partisans on both sides; a lack of consensus exists even among the butter illuminati. Diane St. Clair doesn’t make a salted variety. “I believe that the flavor shines through better without salt,” she said. Grant Harrington of Ampersand Butter Culture in Oxfordshire, who furnishes some of London’s top restaurants, considers the pink Himalayan salt he uses to be essential. I happen to side with St. Clair. Maybe it’s only because the bureaucrats in charge of the Soviet Union’s food production didn’t believe in salting butter, but what palate isn’t shaped by personal history?

I’d learned about Harrington online; butter nerds in the UK plotzed over his product. According to them, the soap-opera-handsome former chef, who toiled under Gordon Ramsay, practices his dark art while listening to the Wu Tang Clan. His butter isn’t available in the U.S., but Harrington agreed to mail me an unsalted sample of his work. Some friends I roped into tasting it grew quiet and nodded soulfully—the stuff was stupendously rich, with unexpected briny notes of iodine and oysters. Harrington attributes the deep yellow color to the Jersey cows that produce the cream he uses. Jerseys give less milk than the more popular Holsteins—the black-and-white cows of children’s books—but theirs is richer and darker because of the way they process the carotene in grass. This, my friends’ faces seemed to say, was butter.

Harrington believes the key to a great butter lies in extreme culturing. “By fermenting the cream with a specific lactic bacteria that produces a blend of butyric acid and diacetyl—flavors our brains associate with butter—I aim to make it taste as buttery as possible,” he said. He sources the bacteria from a lab in Scandinavia and ferments his cream for nearly a week.

At this point, I knew it was time to revisit Bordier. My beseeching emails and calls to Brittany went unheeded. I heard that an acquaintance had smuggled some home from France, but he sounded about as eager to share it as to volunteer for a root canal. And so it came to pass that a fellow butter zealot who works in this magazine’s test kitchen knew someone helpful in Paris. A huge FedEx bill later, the airlift was complete.

I’m happy to report that the diminutive brick in the plain paper wrapper tasted as breathtaking as I remembered—a vast array of flavors and aromas blended into a seamless whole in the manner of a well-aged burgundy. After churning, Bordier’s butter is kneaded in a 19th-century metal-and-teak contraption called a malaxeur (massager); this unusual extra step is the reason for its mouthfeel, as silky as foie gras. And then there’s Bordier’s uncommon balance of elegance and richness. No wonder the French phrase for making a prosperous living is faire son beurre.

By this time I’d spent too long in butter’s thrall, and thinking about it passively at home was no longer an option. I’d read rapturous reports about St. Clair’s butter but never tasted it. And so while the White Mountains blazed crimson and gold in mid October, I raced up Route 91 to see her.

After I met the 11 buff Jerseys grazing behind her 19th-century farmhouse, it became clear that for her they were not livestock but pets, or possibly oversize children. While talking in St. Clair’s living room, which looks out onto her pasture, she fixed one cow with a worried stare. Her husband, Alan, a large-animal veterinarian, sat beside her. “Does she look upset to you?” St. Clair asked him.

Her butter was the most intense I’d tasted. It had a consistency reminiscent of great vanilla ice cream and a long, worrying finish. Like many artists, behind a nonchalant façade St. Clair happens to be competitive and proud, and alongside her butter she brought out a stick from a well-known Vermont creamery. Comparatively, it tasted like a votive candle. “There’s no secret technique to doing this,” she said. She believes that a good butter is nothing more or less than a reflection of its time and place, “a seasonal product that proudly proclaims where it was made.” Butter churned in spring—when cows graze on new grass—has the deepest color and flavor. In autumn the cows consume hay as well as grass, making for a muted but richer product.

“I wanted to make a butter as close as I could get to what was produced before the advent of the modern creamery in the early 1900s,” St. Clair told me. Though she affected the unflappable manner of a New England farmer, her eyes shone when she spoke about butter, a substance she’s called “the elixir of the human race.” I asked whether for her butter was an obsession.

“Milking every single day, twice a day?” she answered. “And when I’m not milking I’m separating, pasteurizing, churning, bottling buttermilk, moving fences, feeding cows, and making hay? I’d say it’s an obsession or insanity.” She paused for a moment, and then asked, “Is there a difference?”

Radish Leaves: Delicately spicy radish leaves allow the most royal of the fats to reign supreme. Spread butter over herbed crackers or thin slices of baguette, sprinkle with flaky sea salt, and crown with a fresh, de-stemmed springy leaf.

Wheat Bread: Nutty whole wheat breads bring out a premium butter’s sweet flavors and creamy mouthfeel. Choose a fresh-baked loaf with a crusty brown exterior and a soft, fluffy crumb. Crunchy nuts and salty seeds are a plus.