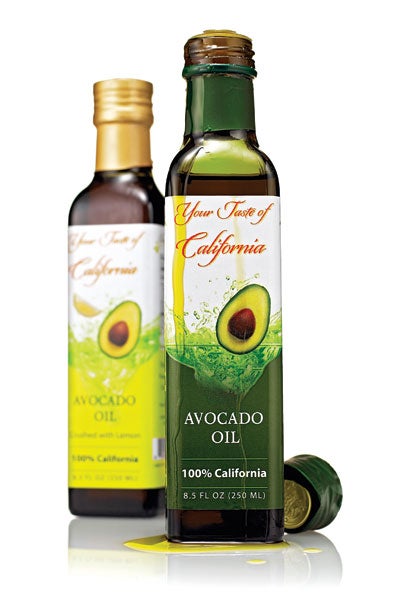 San Diego County is the avocado capital of the United States, and from spring through fall, its markets are inundated with different varieties of the fruit—luscious Hasses, satiny Fuertes, refreshing Bacons, thin-skinned Ettingers. I smash them on toast, slice them into salads, or just cut them in half and dip in with a spoon. Why do anything more? Their earthy flavor and buttery richness can’t be improved.

They can, however, be bottled, as I learned when I met Cid da Silva, a farmer with a 40-acre organic avocado grove in Valley Center, California, who transforms the fruit into oil. “It’s nutty with a velvety texture, and thick, so you don’t have to use much,” da Silva told me. Indeed, his Bella Vado avocado oil has all the qualities I adore in fresh avocados, captured in an emerald green liquid. He first started making the product in 2006, when he was faced with a bumper crop of the fruit. With a surplus on his hands, it occurred to da Silva that avocados’ high fat content could translate into a flavorful oil, something producers in many countries, including South Africa, Mexico, and New Zealand, had already discovered. “It’s truly a new world oil,” said da Silva.

The oil is made from the flesh of ripe avocados that have been skinned and pitted. Da Silva uses Italian machinery that was designed for making olive oil to mash the avocados and separate the oil from the pulp. The liquid is pumped into a polisher, which, by spinning at a rate of 6,000 rpm, removes water and any remaining debris from the oil. Brilliant green and pure, the unfiltered oil is ready for bottling. Da Silva favors Hass avocados because of their high oil content and what he believes to be the best flavor.

Of the five types of oil da Silva makes—pure avocado, avocado with olive oil, garlic-, lime-, and lemon-flavored—I prefer the original and the lemon, which is made with the fragrant Eureka variety da Silva grows on his farm. I like to toss some with kale or Swiss chard, garlic, and salt, and roast the greens until they’re crisp; surprisingly, the lemon flavor withstands the heat. Avocado oil has a high smoke point, which makes it great for frying, though I like to use it at room temperature to preserve the oil’s distinct aroma and flavor—mixing it with herbs and chile flakes, say, to create a dip for bread. Because it’s so mild, it’s well-suited to drizzling over seafood and vegetables. I also use it in vinaigrettes, marinades, or to bring a fruity dimension to aioli. The 250-milliliter bottles cost $10. To order, call 888/299-6457 or visit bellavado.com.