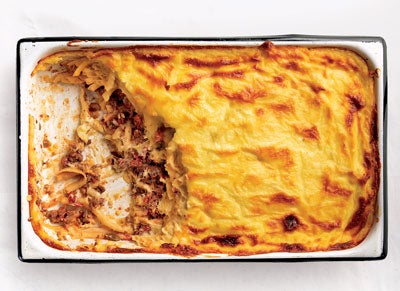 Pastitsio (see Greek Lasagne) is the Greek comfort food par excellence: a layered casserole of macaroni and ground beef, veal, or lamb with cinnamon-scented tomato sauce, topped with a creamy bechamel enriched with cheese. But it isn’t as Greek as you might think. Unlike the seasonal dishes that are the foundation of Greek cuisine, pastitsio as we know it today is actually a French-influenced dish that first appeared in the early 20th century. It is the invention of Nikolaos Tselementes, the French-trained Greek chef who authored Greece’s most popular cookbook of all time, Greek Cookery, first published in 1910. Tselementes’s adaptations of traditional dishes—often radical, as he was introducing classical French technique to age-old recipes—fundamentally changed the taste of modern Greek food. He detested garlic and most spices, which he considered a hateful reminder of the Ottoman occupation, and he thought olive oil too heavy. Longing for the creamy sauces of France, he turned again and again to a bechamel of flour, butter, and milk, adding it to dishes like pastitsio and moussaka, the eggplant casserole. Many Greek home cooks in the early 1900s felt Tselementes’s book was all a household needed to leave the provincial Eastern Mediterranean past behind and step into the glorious European 20th century.

That is not to say that older versions of pastitsio didn’t exist before the book was published. There are actually a number of regional antecedents to the modern dish, all of which were made with a pastry crust. (The name pastitsio derives from an old word for pie.) My mother recalls a heated argument between my grandmother and my aunt over which pastitsio was better: my grandmother’s traditional macaroni pie enclosed in phyllo, or my aunt’s Tselementes-style one, which dispensed with the phyllo in favor of a sumptuous bechamel. My mother went with the more modern version, even going so far as to do away with the careful layering of the ingredients and, instead, simply mixing everything together. It didn’t look as elegant as Tselementes probably would have liked, but we all loved it. Today, I make my own version using a combination of lean ground veal and a smoky sausage produced near my home on the Aegean island of Kea. And cooks continue to update and refine the dish all the time. The version pictured at right has well-defined layers of meat sauce, bechamel, and pasta—in this case, long, hollow noodles designed specifically for pastitsio. There’s also an egg yolk added to the bechamel to give it a custardy texture. It all adds up to a beautiful, satisfying dish.