The Principles of Paella

No matter what kind of paella you're making, the basic steps are the same. Whether cooking over a fire or on a stove top, the key is to build flavors from the bottom of the pan up. Paella pans are designed for this purpose, though a wide skillet of the same size will work, too. 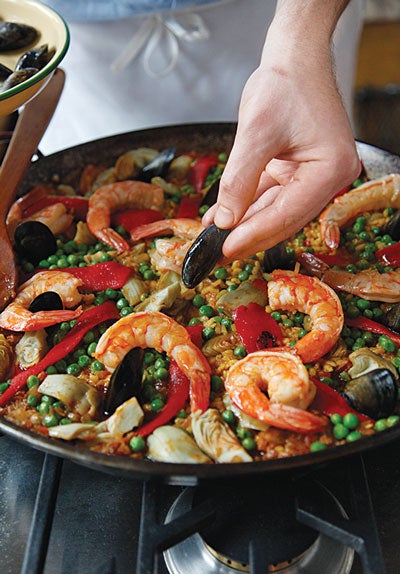 1. Steeping the saffro****n The most traditional way of coloring and flavoring paella is with the dried threads of this spice. Crush them between your fingers over a small bowl and cover with hot water to allow the flavor to bloom.

2. Sauteing the meat or fish Cooking the ingredients in hot oil will build a strong flavor base. If using shrimp or fish, remove it from pan before it’s completely cooked through to prevent overcooking.

3. Cooking the sofrito This vegetable base (garlic, tomatoes, peppers, and so on), cooked with paprika until the spice infuses the ingredients, is another important building block of flavor. The longer the sofrito cooks, the darker and richer the paella will taste.

4. Adding liquid Paella purists in Valencia claim that their local water is an essential ingredient, but using some chicken stock or seafood stock (which should be added at the same time as the saffron and its steeping liquid) will yield a more deeply flavored dish.

5. Cooking the rice After the rice is distributed evenly, stop stirring and allow the grains to soak up the liquid. Move the pan every few minutes so all parts receive direct heat and cook evenly.

6. The final simmer When a thin layer of cooking liquid remains, reduce heat to low, add remaining ingredients, and cook until the rice has absorbed the remaining liquid.