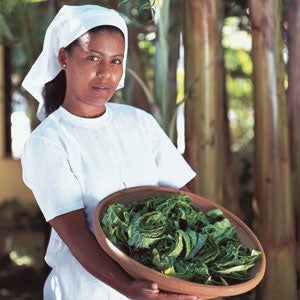 In 1979 I made my first trip to Brazil, landing in Rio on one of those wet, glistening summer evenings just before Carnaval. I stayed up until three that night, drinking caipirinhas–cachaça (sugarcane brandy) and crushed limes—with Dick Elliston, my best friend from graduate school, and his Brazilian wife, Nidia, whom he met while working in Rio as an executive for Sears. On their rooftop terrace, we drank and talked and looked up Corcovado mountain to the massive, floodlit statue of Cristo Redentor.

In spite of the late night, the next morning I managed to drag myself out of bed and tag along with Nidia to the market, where she picked out the kilos of black beans; the dried beef, pig’s ears and tail and foot, pork loin, bacon, beef tongue, and sausages; and the rice, oranges, kale, and manioc flour needed for the classic Brazilian feast called feijoada completa–or feijoada, for short—after the Portuguese feijao (bean).

Me, I’m a guy who likes his meats fat, his drinks strong, and his weather hot. By the next afternoon, when we were up on the terrace by the pool in the sweltering Rio sun, digging into plates of rich meats, smoky beans, and fluffy rice and knocking back one caipirinha after another, I was hooked—hooked on Brazil and its most emblematic dish.

Over the years since then I’ve come to realize that feijoada is not just a meal; it’s a particularly Brazilian collage of eating and drinking, family and friends—and of cultures and history, too.

Accounts differ, but it most likely originated in the 1600s on the country’s northeastern coast, where Portuguese colonists had built vast sugarcane plantations dependent on African slave labor. Feijoada is commonly thought to have been a slave dish, a thrifty combination of black beans with variety meats, like pigs’ ears and tails, that the plantation owners discarded. But Brazilian historians increasingly believe that feijoada, though perhaps invented by slaves in plantation kitchens, was meant for the masters’ tables and that it was an adaptation of the Portuguese meat and vegetable stew called cozido using local ingredients—including those variety meats, which, in fact, the colonists prized.

Whatever its origins, this humble, hearty dish eventually crossed every ethnic and socioeconomic border. Today nearly all Brazilians eat feijoada, regardless of race, culture, or income level; many of them have it once a month or more, usually on a Saturday. Although there are regional variations—in the north, for instance, brown beans are sometimes preferred, and the meats can vary—the dish is fairly consistent nationwide.

When I got back to the States after that first magical venture south, I could hardly wait to try cooking my own feijoada, and once I’d found a satisfactory version, I made it often. But every time I’ve returned to Brazil since then, I’ve been reminded that my own dish lacks a certain, shall we say, authenticity? The tastes of my guests have forced my wife, Shan, and me to eliminate the “cheap” cuts of pig’s ears, feet, and tail (we sneak them into the pot to add flavor and texture to the beans and broth, but we toss them out before serving the dish).

We’re always looking for ways to improve our feijoada. So, when our friends Paulo and Rosane Carneiro, who live in Recife, on the northeastern coast where the first feijoada was reputedly made—and whose cook, they told us, did an especially fine version of the dish—called us while we were visiting Rio last fall and invited us up for the weekend, we were delighted. It had been a while since we’d seen them, and we’d never tried Maria Luciene da Silva’s feijoada.

We’d met the Carneiros through Dick and Nidia, and Nidia would be at the feijoada too (Dick died a few years ago). Paulo, a solid, distinguished-looking man with smooth white hair, is a top commercial real-estate developer, and Rosane is one of those luscious Brazilian women whose laughter is infectious—hers especially so on feijoada afternoons, which the Carneiros frequently spend with their three daughters and many friends at their beach home in Toquinho, a spot 50 miles south of Recife, where the Aquira River enters the sea.

Once Shan and I had arrived in Recife, I went with Rosane to the giant Bompreço supermarket, her driver following us down the aisles, cart in tow. I couldn’t believe the size of the place, with its counters of salted and smoked feijoada meats piled to eye level, its giant stacks of packaged beans, and its more than 50 checkout stands, all in use!

Rosane sent the food down to Toquinho with the driver, and we followed the next day, a Friday. By the time we arrived, Maria Luciene da Silva, a petite, dark woman dressed in crisp white, and a helper, Maria Jose de Melo, had already put the black beans and the smoked and salted meats into wide clay pots to soak. Rosane explained that da Silva, who had been with them for five years, had brought her own family’s feijoada recipe with her but that she and Rosane had fine-tuned it to suit the Carneiros’ tastes by adding more expensive cuts of meat. Their dish contained carne seca (dried beef), pork loin and ribs, linguiça (smoked pork sausage), smoked and salted pig’s feet, ears, and tails, and the spicy pork sausage called paio. (Tongue isn’t traditionally added in the northeast, so da Silva left it out.)

The next morning, the cutting and chopping began. Da Silva’s nose barely reached the top of the huge pot on the stove, so she stood on a chair to saute onions, tomatoes, cilantro, and garlic in olive oil until they softened. Next, she dropped in the meats and the beans. She poured in the rich purple bean-soaking liquid, too, so that the beans wouldn’t turn gray—and also to make one of the best parts of the feijoada: the bean broth, or caldinho de feijao, drunk in small ceramic cups just before the meal. I was surprised and gratified to see that da Silva was making feijoada the same way Shan and I do, except that we insist on adding tongue and salt pork. 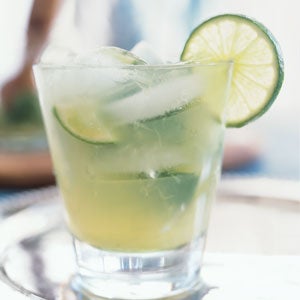 Some Brazilians substitute vodka for the fiery cachaça–sugarcane brandy–in this classic drink and call the result a caipiroska.

As the feijoada began its long, slow simmer, basically cooking itself, I changed into a pair of trunks and had breakfast under the coconut palms and plumeria trees. I watched the river flow by and dipped into the pool. Occasionally I’d pad back into the kitchen, watching as da Silva stirred the bubbling pot and spooned out a taste, holding it up to her nose and smelling it to get a full sense of the developing flavors. At about two she put the rice on, first sauteing grated carrots, onions, cilantro, garlic, and a few chicken stock cubes in butter and oil and then stirring in the grains.

At around three, friends and family began arriving, Nidia among them, and soon we were all noshing on meaty crab cakes and tapioca crisps. The cooking aromas grew steadily more intriguing as throbbing bossa nova rhythms poured from the sound system and the drinks flowed. Paulo, behind the bar in trunks, made caipirinhas, dropping lime wedges and sugar into each glass and then mashing them together with a wooden pestle before adding ice and a good dose of knock-’em-dead cachaça.

Finally, an hour before sunset, de Melo and another helper emerged with the caldinho de feijao, in both ceramic cups and shot glasses. Often the caldinho comes with fried pork rinds called torresmos. Da Silva and Rosane don’t serve these, though, and I missed them.

In the kitchen, the huge pot had been hefted off the stove onto a stool, and Nidia, Shan, and I watched as da Silva, Rosane, and her daughter Cintia ladled the mixed-together meats onto clay platters (in restaurants, the meats are often served separately) and poured the beans into a tureen. “Now,” said Rosane, “now we can have fun.”

Brazilians, nearly always a casual people, often serve meals buffet style, so we lined up at the food-covered table on the patio and piled our plates with beans and rice and meat. On the side were the dishes without which no true feijoada is complete: orange slices (to cut the fat), sauteed collard greens, and farofa (toasted manioc flour), which feels like fine dry bread crumbs. Farofa absorbs liquid and adds crunch, and Brazilians sprinkle it over just about everything on a plate. A bottle of Tabasco stood in for the more traditional molho de pimenta e limao, a sauce of Brazilian malagueta chiles, onion, garlic, and lemon juice.

As I ate the earthy black beans and the fat, juicy meats and the steaming rice, watching the river and our friends talking, I thought back to my first Brazilian feast in Rio, more than 20 years before. Nothing had changed: eating feijoada was still the best way in all the world to spend a Saturday afternoon in the tropics.