On a cattle ranch in the Santa Ynez foothills, a family holds fast to the land and the bounty it gives 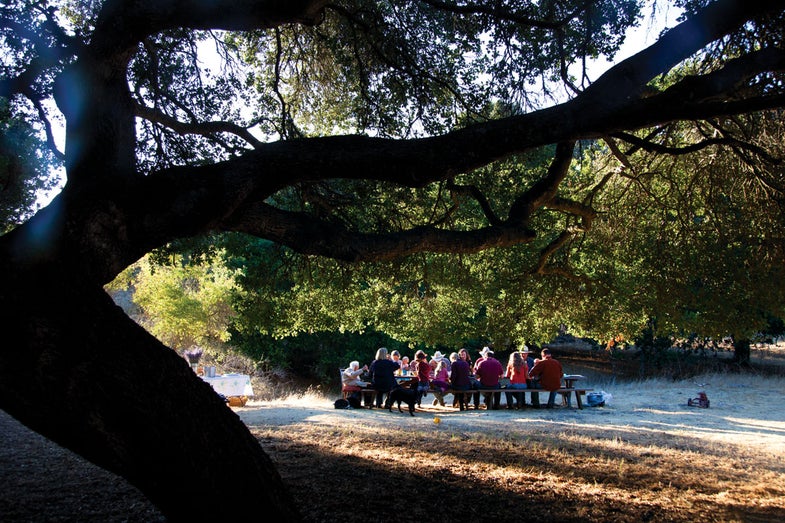 This meal is a homecoming of sorts, even though my actual childhood home is 50 miles away. Here, sitting down to supper in the shade of a live oak tree in the grassy heart of the Central Coast, I feel as happy and grounded as a 33-year-old native Californian can be. Perched next to me on the wood bench is one of my oldest friends, Elizabeth Poett, a person I’ve played with and fought with and shared my greatest joys with and loved for so long that I could almost take her for granted. But I don’t. When you’ve been away from a place like this for a few years, as I have, you only cherish it more.

Elizabeth went to school with me, down the coast in Santa Barbara, but she grew up here, on the oak-dotted grasslands of Rancho San Julian, a 13,000-acre cattle ranch that has been in her dad’s family for nine generations. She is a descendant of Jose de la Guerra, a commander of the Santa Barbara presidio, who was granted this land in 1837. Now she works full-time on the ranch just like her dad and many of her cousins, who share ownership under a family trust.

I did a lot of growing up here too, spending countless weekends with the Poetts during my school-age years. This is where I learned how to ride a horse, how to mend a fence, and how to scoop the flesh from a ripe avocado and turn it into guacamole.

Today I’ve made a big batch for old time’s sake. This one is in proper California style: studded with chunks of tomato, flecked with cilantro leaves, and amped up with a ton of lime and salt. We eat it with fragrant corn tortillas made by the wife of one of the Mexican ranch hands who lives here full-time.

Elizabeth’s parents, Jim and Marianne, are here, too, along with a handful of cousins and friends who live nearby. Jim was one of the first ranchers in this part of California to raise organic beef. Marianne is the founder and editor of a local newspaper. She is also an amazing cook, and though she’s not a native Californian, she’s one of those transplants who has taken so naturally to the kind of simple, direct cooking inspired by California’s bounty that you’d think she was born here. For me, this meal is the true California cuisine.

Earlier today I helped Marianne and Elizabeth make enchiladas from a recipe that Marianne found in some journals where Jim’s great-aunts and others collected family recipes over the years—Marianne has been translating them from the Spanish. The dish is brilliantly simple, and utterly of this place. The sauce is a smoky puree of local Anaheim and pasilla chiles, and instead of chicken or pork she adds olives, the canned, glossy-black, meaty kind I grew up eating. These California pantry staples, out of fashion elsewhere in the country, are a ubiquitous and beloved ingredient on the Central Coast. “If you see olives in a recipe for enchiladas or tamales,” Marianne told me as she fried the tortillas, “you know it’s from here.” Then she dipped the tortillas in the sauce and rolled them around a filling of sauteed onions, olives, and crumbly cotija cheese. Just like I remember.

Now, as the shadow of the Santa Ynez foothills creeps across the clearing where we eat our picnic supper, I taste the enchiladas. Their smoky flavor takes me back to Saturday night dinners with Elizabeth and her family when I was 12 years old, after swimming in the creek or riding in the back of her dad’s pickup and tossing hay to the cows. I’ve missed this food more than I knew.

The main course is a Central Coast classic: a juicy, tender beef tri-tip rubbed with salt, pepper, garlic, olive oil, and rosemary. Elizabeth grilled it slow over a hardwood fire she built in her dad’s old grill, which has an ingenious suspended rigging system that allows you to raise and lower the grate during cooking, giving the cook control over just how close the meat gets to the fire. The wedge-shaped roast that comes to the table is sheathed in a savory char. Elizabeth slices it into thick steaks, rosy in the middle, and passes the plate around.

There is no part of the cow that can satisfy a Central Coaster like the mighty tri-tip, which is miraculously both lean and rich at the same time. Rancho San Julian sells a lot of tri-tips, among many other cuts of beef, at farmers’ markets in Santa Barbara and Santa Monica, all of it from their herd of 500 pasture-raised cattle. With a whole generation having come of age knowing only the taste of corn-fed beef, grass-fed meat has finally made a comeback, Elizabeth tells me as I take a second helping of steak. “Older customers at the farmers’ market tell me that our meat is what steak used to taste like when they were kids,” she says.

In this part of California, you can’t have tri-tip without beans. A lot of people insist on Santa Maria—style beans—named after the nearby town where tri-tip barbecues are a way of life, and typically made with a local variety of beans called pinquitos, which are slow-cooked with tomatoes, onion, and all kinds of seasonings. Some cooks make a refried version of this; others, like Elizabeth, like to add bacon. But her cousin Julianna has made an ingenious updated version using kidney beans and pintos, as well as chickpeas, stewed to a caramel depth and brightened with bell peppers, fresh salsa, cilantro, and jalapeños. Fantastic. There’s nothing particularly traditional about the dish, and in that sense it strikes me as particularly Californian.

The tri-tip is a handsome centerpiece, but what really blows me away is Marianne’s empanadas. Made with fresh corn masa, they’re flaky and delicate yet packed with strikingly bold flavors. It’s not just the luscious shreds of long-roasted brisket, which alone would have been enough; it’s the picadillo of sherry-soaked raisins, pine nuts, and olives, which delivers a briny-sweet balance in every bite. A dusting of powdered sugar on the golden pastry puts the empanadas just over the top. This is typical Poett family cooking: dishes made with incredible love and attention, presented in unpretentious packages.

Dessert is an apricot tart, brought over by the Poetts’ neighbors, Chris and Carla Malloy, and made with fruit that grows on the ranch. The sun is well below the hills by the time we dig into it. Another of the cousins, Daniel Berman, pours me a little more of the Lompoc pinot noir he’s brought from the Santa Barbara winery where he works. It’s getting chilly, but Elizabeth and I linger at the table long after dessert, talking about our lives. After living in New York for a few years, she came back to San Julian in 2006 and got married a few years later, moving into one of the old ranch houses on the vast property. I ask her what a typical day is like.

“Well,” she replies, “tomorrow I have to deliver some marrow bones to a chef, feed a new bunch of steers extra hay and alfalfa so they’ll start putting on weight, and sort some bulls from a group of heifers so the vet can get in there and see if the girls are pregnant.” Elizabeth asks me about life back East. I tell her she’s not missing much.

At six the next morning, Elizabeth and I are bumping along a dirt road in her Chevy pickup through a valley dotted with more of those majestic California live oaks.

In the near distance, black Angus cows graze with their calves. It’s barely light, and a cool fog has rolled in from the Pacific overnight, obscuring the hills around us. We’re on our way to the farmers’ market, and the bed of the pickup is filled with coolers containing rib eyes, chuck roasts, skirt steaks, briskets, sirloins, ribs, and plenty of tri-tips. At the market, Elizabeth, willowy and blond, cuts a striking figure among the other farmers, who are mostly men. Business at the Rancho San Julian stand is more than brisk.

We’re back at Elizabeth’s house a few hours later, in time for a late lunch. We make tacos with some of the leftover tri-tip, chopped onion, and a couple of poblano peppers that she has roasted over an open flame on her stove until they’re blackened and blistered.

After lunch I help Elizabeth and her husband, Austin Campbell, who works on a ranch not far away, get the house and yard ready for tonight’s dinner, a birthday celebration for Daniel. Jim and Marianne will be coming down from their house, a few miles away, along with other relatives. With some delicate maneuvering, we manage to carry Elizabeth’s dining room table out onto the wood porch, which has rosebushes growing all around it. Austin loads the grill barrel with wood.

“Tonight we’ll keep it simple and make burgers,” says Elizabeth. That kind of statement can be deceptive in the Poett family. The just-ground patties are magnificent chuck from the San Julian herd—as richly marbled as that of any corn-fed animal. Elizabeth cooks them not over the grill grate directly but in an old seasoned cast-iron skillet set over the hot fire so that their fat and juices aren’t lost to the flames. And, as I’m reminded at dinner, burgers around here serve double duty as a luscious platform for an extravagant tower of fresh produce, from grilled yellow onions to crunchy lettuce leaves to thick-sliced garnet-red tomatoes.

Just as everyone is showing up, Elizabeth tosses ribbons of summer squash on the grill and then improvises a salad: heads of romaine cut in half and laid on the fire until they’re singed around the edges. Drizzled with olive oil and balsamic vinegar and strewn with crumbled bacon and blue cheese, they make an unfussy but stunning side dish.

Given the freshest meat and produce in the world, I think to myself, no restaurant could put forth a meal as guilelessly beautiful as this. At the end of the night, Elizabeth and I are once again the last ones to retire, sitting close to each other at the end of the long table, which is now mostly bare, except for a few flickering candles. We reminisce, and also talk about the future. I tell her I hate the thought of leaving, and I promise her that, next time, I won’t stay away for so long.

See the recipes and more photos in the gallery »