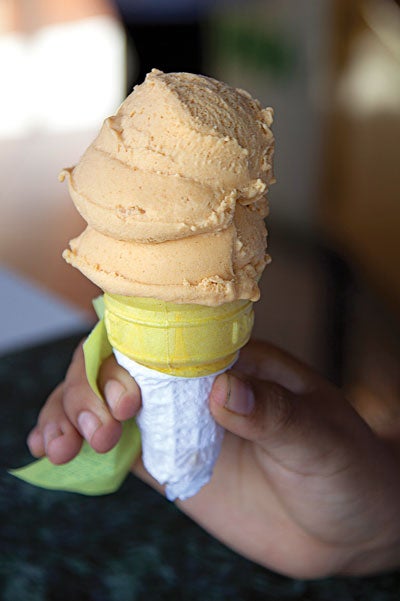 Every summer weekend in Lima, Peru, scores of residents evacuate the capital for a 100-kilometer drive south to the beaches where the city’s upper crust keeps summer homes. The Pan-American Highway, which weaves its way through towering sand dunes lined with giant billboards advertising flat-screen TVs and Cusqueña beer, is choked with cars.

Appearing out of nowhere like an oasis at kilometer 63.5, in the town of Chilca, is Helados OVNI. The brightly painted ice cream shop, named after the Spanish acronym for an unidentified flying object (sightings of which are frequently reported here), is plastered with UFO paraphernalia. A welcome break from the traffic-snarled journey, OVNI sells just one flavor of ice cream: lucuma.

Pronounced “loo-koo-mah,” the eponymous ingredient is sometimes called eggfruit for its dry, orange-yellow flesh, which is similar in texture and color to a hard-boiled egg yolk but tastes nothing like one. Found only in the lower altitudes of Peru and Chile, green-skinned, baseball-sized lucuma has long been a staple of the indigenous cuisine; it is depicted on the ceramics of Peru’s ancient coastal civilizations. It has a thin shell that peels off when ripe and a buckeye-like brown seed.

Rarely eaten plain, lucuma is usually blended into a pulp used in desserts, most popularly in ice cream. OVNI’s version is sold by the cone or in a container with an illustration of a UFO and a lucuma. The flavor is somewhat like maple syrup poured on sweet potato. Scooped plain or with pecans and chocolate chips mixed in, as some OVNI customers prefer it, there’s nothing else quite as evocative of a beach day in Peru.