For one writer, a spa trip is the key to recapturing a youth of delicious excess 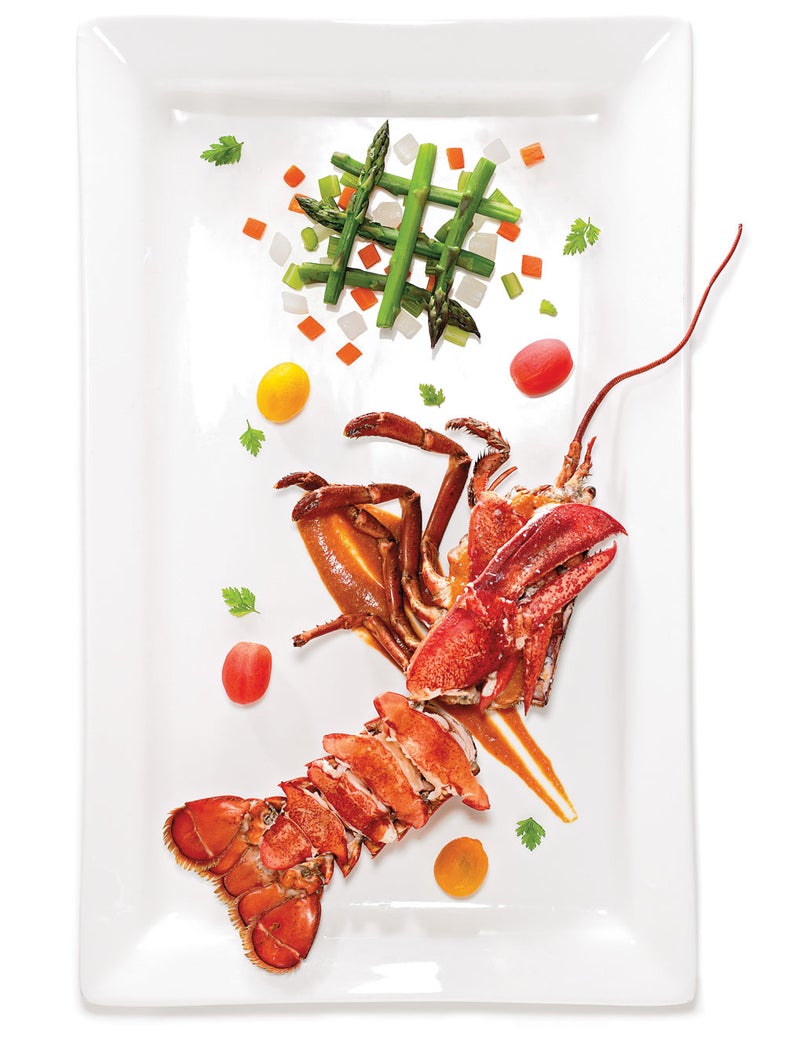 The tomato-wine sauce for this light lobster dish gets depth of flavor from the addition of the lobster's tomalley. Michael Kraus
SHARE

In my neurotic need not to be late, my partner Steven and I arrived at the Bordeaux train station hours early. We were on our way to nearby Eugenie-les-Bains to splurge on the cooking of the great French chef Michel Guerard. I settled in a seat looking directly at a PAUL bakery kiosk selling our favorite baguettes. “Shall we get one for the train?” Steven asked.

I watched the sign board. Hours passed. Our train to Mont-de-Marsan arrived. “Quick,” I suddenly decided. “Let’s get a baguette.” I grabbed a salami sandwich. “This too.” He gave me that look. I was going to take only one bite of the salami, but damn, it was so good, salty, greasy, spicy. I ate my half, the humble preamble to a day and night of three-star dining that would double as a trip down memory lane.

Before there were thousands of restaurant critics in the blogosphere, there were only three or four who mattered. And the blonde one was me. Starting in late 1968, bankrolled by my expense account at New York magazine, I had the first and last word about New York’s most rarified restaurants. But for serious culinary ecstasy in those days, I needed to take my mouth to France. Happily, the magazine agreed. I ate seafood at Le Duc, duck at La Tour d’Argent, the pastry-wrapped bass at Paul Bocuse. And I marked a path to a working class suburb outside Paris where the young chef Michel Guerard was wowing seasoned gourmands.

Of all the practitioners of nouvelle cuisine, Guerard was, for me, the most brilliant. But I suppose he will be best remembered—celebrated and, by some, snorted over with derision—as the creator of the cuisine minceur, “slimming cuisine,” which slashed the fats but, through clever use of vegetable purees and other low-cal ingredients, kept the flavor. A committed gourmand, Guerard needed thinning himself. With marriage to Christine Barthelemy, daughter of a thermal-spa dynasty, he moved from Paris to Eugenie-les-Bains in the southwest of France. There in 1974, he invented zero-calorie fromage blanc sauce for veal and the much-imitated plate-size glazed apple tart on one thin tissue of pastry. He lost five kilos.

Given my job, it was no surprise that I would be invited to be one of the first guests—shall I say victimes?—when the newlyweds opened a country hotel steps from the family spa. I lost five kilos too.

In the years after my article on slimming Michel and Christine’s way came out, they expanded their empire, with costly suites and a luxury private spa, and I went often. “The First Slimming Village of France,” the sign warned at the entrance to sleepy Eugenie. In truth, there was indulging too. I might lunch on an exquisitely sauced smidgen of lobster and an orb of sorbet to oblige his diet-cooking obsession. But at night, I reveled in the three-star Michelin chef’s carte gourmande, filled with many fantastically caloric offerings for guests who were not watching their waistlines, devouring such decadence as a foie gras pot-au-feu with truffle sauce.

Decades later the memories were still vivid. So when I realized that a lecture gig would take me and my guy to nearby Bordeaux, I decided we must get to Eugenie. I would spring for the splurge. I’d not been back since 1998; I rarely get to France these days. No longer on the masthead with a pampering expense account, I now review restaurants on my own website, and I pinch pennies and make my guests share because the bill is on me. The world has shifted.

But I was still hearing raves about Guerard. Of all the rock stars who had championed nouvelle cuisine, he was perhaps the only one of his generation still actively inventing, and I was eager to measure his success once more. I suppose I was also looking forward to recapturing the decade when culinary thrills were new and I was exercising my power to inspire a fuss, traveling haute on the hog on someone else’s dime. Unlike in the old days, our stay would be brief—I was not about to toss in another $1,500 plus tips for a second night in Eugenie. But I made sure that we would make the most of our 26 hours and arranged for us to eat four meals. In my youth, such an intense dining marathon would have been a typical lark.

The Guerards sent a taxi to take us to Eugenie. Our timing was perfect for lunch at La Ferme aux Grives, the couple’s inexpensive restaurant, where hams hang from the ceiling and pork roasts turn on a spit in the giant maw of the fireplace. It was a holiday Monday in France, the house was packed, and the two of them flew through the room, air kissing friends, neighbors, and me. Mindful of my budget, Steven and I ordered the $60 lunch, burning our tongues on wonderfully moist gougeres that were rushed to the table too hot to eat. Steven’s snails arrived in seven lilliputian cups oozing garlicky butter, each topped with a toast chapeau. Seven. I like that touch. Better than six. While he shared with me, he dismissed my tete de veau, calf’s head in thin anatomical slices with a tangy sauce gribiche. I was in heaven.

His rich lamb shoulder was deliciously caramelized from the fire. My chicken—a farm bird with gorgeous flavor—had come with buttery potato puree in one dish and in another, crusty penne, drowning in cream. The warm rhubarb tart was wondrously acidic. Afterward, we walked through the flower garden, photographing the irises, exciting the bees. I consciously willed myself to remember it. Spring.

I had prebooked the cheapest room in the Guerards’ most modest hotel. But now that we were there, they insisted we stay in their new addition, L’Imperatrice. I yielded without protest. Our vast imperial suite overlooked the garden. Everything was tied with bows.

Michel and Christine met us for champagne and canapes below in the lounge, glamorous with its tufted leather sofas, zebra upholstery, and Empire portraits. Michel was excited about his new work with professors of medicine, devising cuisines for victims of various ailments—diabetes, obesity, heart disease, afflictions of the liver. The French are much ado with their livers. I found it hard to concentrate while nibbling charcuterie, caviar on teeny crepes, and mini foie gras puffs, all while speaking bits of Franglais.

I want to say dinner was a miracle more wonderful by far than the thrilling lunch. Except it wasn’t. The room at the Guerards’ grandest restaurant, Les Pres d’Eugenie, was serene, the table poshly swathed in heavy linen, with herbs and two-tone purple pansies from the garden in water glasses, the captain in tailcoat, the service proper and not too stuffy. But Michel wanted me to have his Zephyr de Truffe “Surprise Exquise” en Nuage, a truffled floating island on a delicate creamy soup. It was much too much fluff for me. Too many dishes riffed on tempura. Fried leaves fluttered everywhere. Disappointed, but trying not to be, I wondered: Did I order wrong? Why was the kitchen so hooked on frying as if tempura had just been invented? Should I have ordered a bottle of wine, not a glass, or even a bottle of white and another of red as I did in my expense account days? Would it help if I were tipsy? Or 30 years younger?

The next morning we had to have breakfast in time to have lunch in time to catch the train back to Bordeaux, so after a room service meal (wonderful), we packed and headed to the main dining room. I was game to tackle a gourmand lunch but in this quiet season with just a few cure-seekers in residence, the kitchen was only doing la grande cuisine minceur. And anyway, what would a visit to Eugenie have been without one last “slimming” meal? We settled into yet another exquisite alcove. Five small curls of perfectly cooked shrimp pierced by a green stem lined up on a puddle of sauce. A finger bowl followed. And then slices of veal in a foamy emulsion with mushrooms, haricots verts, a single miniature squash split in half, and lentils. The presentation was as beautiful as always. But something was off. It was, I realized with a start, me. I could feel my own appetite for drama, for excess, fighting against the sanity and restraint of this meal.

Then our car arrived. As we drove toward the station, I contemplated our visit. I loved the adventure. I was pleased that we did it. The luxury of our suite would be a story to wow rich friends. Michel seemed very jaunty. Still, in spite of everything we’d eaten in 26 hours, I was, I realized, still hungry. But, then, we were running for the train. No time to pause for a salami sandwich.

See the recipe for Lobster Americaine with Asparagus and Tomatoes »